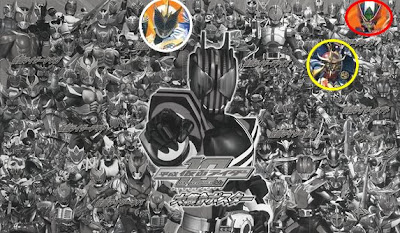 On Kamen Rider Decade, there will be Kamen Rider Diend, that covers other riders, but I wonder if there will be a third original (not counting Abyss) Rider in Kamen Rider Decade representing the females. It is highly unlikely since there are so few female riders. The show is now in the Ryuuki world, we have seen Kamen Rider Femme in newspapers and posters in Episode 6 but is it possible we will see her in Episode 7? We have yet to go to the Blade or Hibiki World, so we don't know yet if they will be saved for later. I think it could be possible for one episode only, maybe Natsumi Hikari will become a rider and she will have the power of the three female riders. But a Kamen Rider 'dasmel in distress' has never become a Rider before. I think it is taboo or a rule that they are never allowed to be a Rider. Anyhoo, if there is a female 'Decade' rider, what color she would be since pink and blue have been used? Yellow? Green? White? I am hoping green.

Okay, now they are in Faiz world, having left Blade World and the Riders from the Blade movie, including Kamen Rider Larc was not covered. Kamen Rider Femme didn't psychically appear, just in print, so maybe there is a chance the three female riders will be covered. Also, interesting to mention Kamen Rider Diend will first become 3 Riders exclusively, but maybe some more later, but does give some chance there could be one female rider that turns into only 3 riders. I am still crossing my fingers!!! And if by the off chance someone translates this to Japanese, I just want to say thank you for visiting my blog and that I hope there will be a female Kamen Rider! If this series is covering the last 10 years, having had female Riders is a big landmark that should be acknowledged!

UPDATED 06/03/09
Now that they have visited all the worlds pertaining to the shows and are on their way to the Evil Riders world, we have no seen Kamen Rider Femme or Shuki in physical form. We did get new rider Kamen Rider Amaki, who is female but looks exactly like Kamen Rider Ibuki. The newest news is that Yoko Mitsuya will reprise her role on Kamen Rider Decade as Kamen Rider Larc with the other two from Kamen Rider Blade: The Missing Ace. Kamen Rider Decade is set to end by the end of August.

Posted by Lavender Ranger at 2:52 PM

Hey! About That "It be cool to have Girl 'Decade' Rider that represents the 3 girl riders?"

Please PUT that in Henshin Justice Unlimited. everyone needs to vote on this.

I WANT a Girl 'Decade' Rider before the series ends or special because Hibiki is the LAST stop in Decade series.