This has already hit so many blogs but I have been so busy to do this so I merged them. 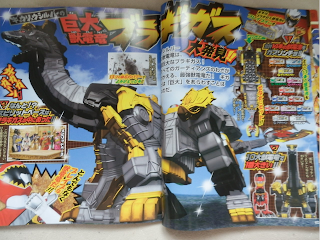 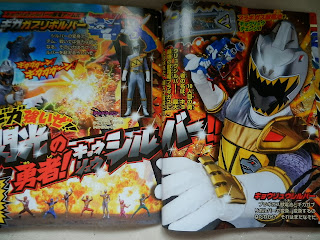 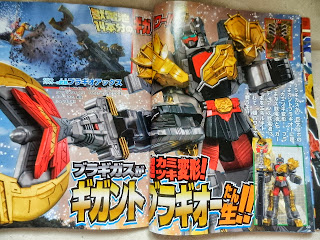 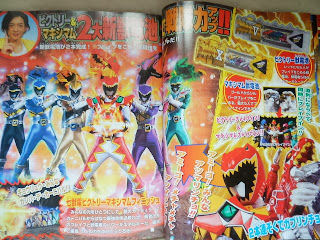 烈車戦隊トッキュウジャー Reesha Sentai Tokkyuger has been copyrighted so it is the official name.  The title is a pun on the Japanese word 'ressha', which means train with using the kanji characters for 烈車 vehement car instead of the usual 列車 line car. The "Vehement" character can be found in words such as "Rekka" or "Reppu", and can even mean heroic. Tokkyu means limited express train, some people say the 'kyu' which means rescue is also incorporated. It can be said to be translated as "Vehement Car Taskforce Special Express Ranger". Fans seem to be excited about the train theme.

Updated: 9/30/13
Take this with a grain of salt, you can take this as truth or myth, a rumor if you will. There is no requirement for you to believe this, as many chose not to. On Twitter, there is a script supervisor for Toei that works on Super Sentai, checking the scripts and making sure they appeal to youth. He is Japanese and learned English in Philippines. Some people don't believe he is telling the truth. He has gotten in trouble with Toei for spilling some secrets. But what he can say about Tokkyuger is that the story, robo, colors, and suits have been finalized by now. China has to finalize toy designs as they manufacture the henshin devices. Thailand does mass production. As for most Sentai, theme and robo is settled first. Then comes story, colors and suits. Colors come before suits are finalize. This seems interesting to me.
Posted by Lavender Ranger at 10:07 PM No comments: 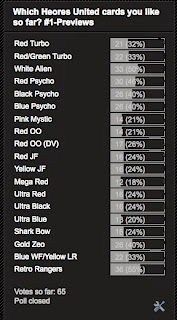 Which Heores United cards you like so far? #1-Previews
Posted by Lavender Ranger at 7:40 AM No comments: 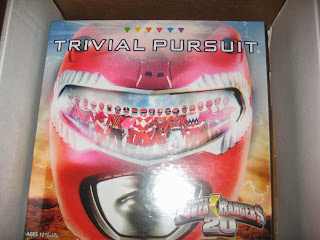 I know a lot of my fellow Power Force members will be posting their reviews on this product as we all just received it. A lot of Power Rangers fans have bought it in advance and taken pictures, scanned and tweeted about it. There has been plenty of controversy over the game Saban Brands got the members of Power Force to write some questions with instructions of specific format on questions. First of all, they asked us for 85 questions per 5 seasons (or movie). They then said they made a mistake and they had us do 25. Second, Jason David Frank got a copy at SDCC 2013 and didn't like Trini Thuy question. 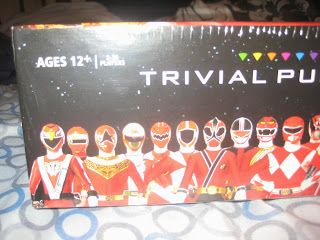 Third, fans complained about spelling mistakes and incorrect answers (facts incorrect). Some of Power Force want to clarify that we recommended a spell checker and a fact checker. I am not sure about this but I heard that some people are holding Power Force responsible for the mistakes. I really don't mind either way, I find the mistakes hilarious. The Power Force members were split into groups, 5 of us were split into four groups. Each group had 5 seasons and a bonus (add any questions for any season we wanted). I was grouped into MMPR Season 2, Turbo Movie, Lightspeed, Dino Thunder and Jungle Fury. I like the game, I like the packaging, I like the designs. As for the spelling mistakes and fact mistakes, I find them whimsical. 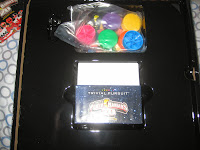 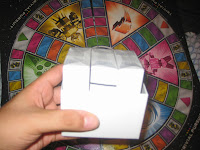 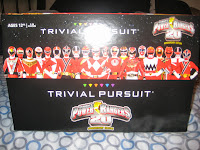 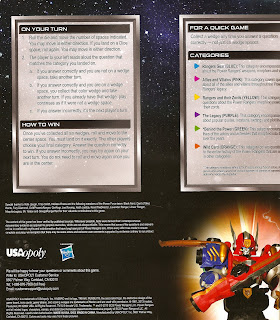 Mistakes I noticed, I know there is more:
"Which era of the United States did the Wizard of Deception send the Power Rangers to: Prehistoric, Colonial, Wild West or the 1970s?" The answer printed is "Wild West" but in reality it is "Colonial."

"What Children's magazine gave away the identity of the White Ranger before the episode aired in Mighty Morphin Power Rangers, Season Three?"
Disney Adventures, it was actually season two.

"What planet are Lergiot and his family from, as introduced in Mighty Morphin Power Rangers Turbo: The Movie?" - Liaria

"In the Episode, "Lost and Found in Translation," the Dino Rangers are watching what Japanese Show?" - The television show Bakuryuu sentai Abaranger - Mighty Morphin Power Rangers was adapted from it.
Not quite, Dino Thunder was based on Abaranger. MMPR was based on Zyuranger.

"Which ranger sends someone back in their place after their Zeo quest is completed in Mighty Morphin Alien Rangers? Aishia

And I think the "who owns Jungle Karma Pizza" question appears twice.

So far I have spotted TEN questions that was printed exactly how I wrote it. Here are some that I did:


MMPR Season 2
It is possible my questions are rephrased or someone had a similar question.
My Question: Which Power Ranger actor was the eldest in the cast in Season two? - David Yost
Question on the game: Who was the oldest Power Rangers actor in Mighty Morphin Power Rangers, Season Two: Johnny Yong Bosch, Thuy Trang, David Yost or Amy Jo Johnson? - David Yost

Jungle Fury
THE FOLLOWING I WROTE TO SABAN BRANDS but I'm not sure if they made it or not.
Posted by Lavender Ranger at 9:09 PM No comments:

I kindly asked Andy of Bandai's Power Rangers Action Card Game Facebook for a preview and he obliged. This is the MEGA surprise I hyped up last week on my own Facebook page and Twitter. I am proud to have a female card preview. Please just link to this page. I will release a non-watermark one in a few weeks. 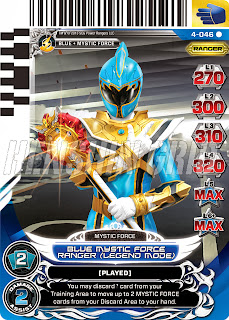 This is a rare card. It is 4-046. The sound it makes in the Gosei Morpher is "Mystic Force Blue Power Up." You can discard 1 card from your training area to move up to 2 Mystic Force cards from your Discard Area to your hand.

Saban Brands also sent me the Trivial Pursuit game that Power Force worked on, I will review it in a few hours.


Related: http://henshingrid.blogspot.com/2013/09/pr-acg-4-legends-unite-previews.html
Posted by Lavender Ranger at 4:10 PM No comments: