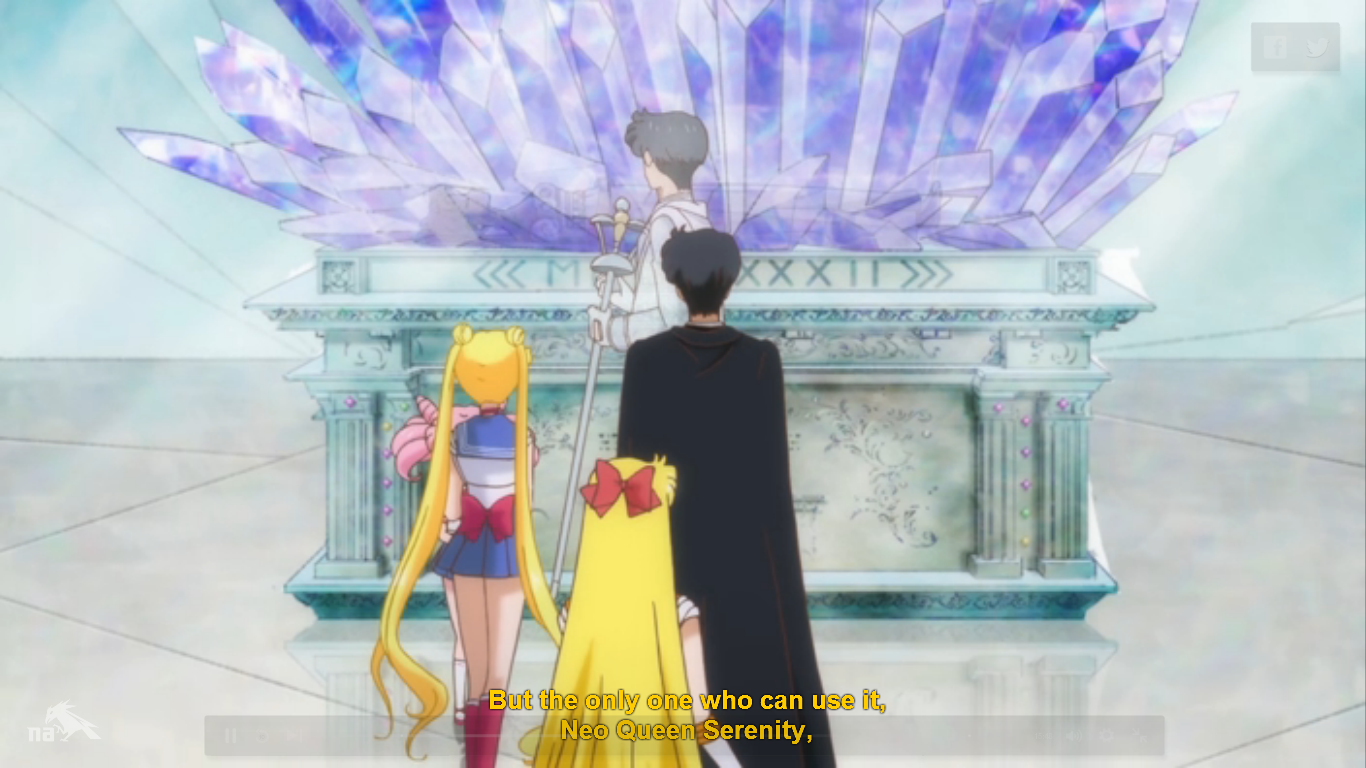 Episode Review:
Where we last left Usagi, Mamoru, Chibi-Usa and Minako, they met Chibi-Usa's dad King Endymion in the Crystal Palace. Usagi notices he has no reflection, he explains that his spirit left his body which is resting in a safe place and he is the future Mamoru. Chibi-Usa introduces herself as the Princess of the silver millennium. Diana says Endymion protected her. Usagi and Mamoru freak out at the news that Chibi-Usa is their daughter and that Usagi is queen. Endymon explains an explosion occurred, the queen stuck in a crystal protected by the Guardians (same outfits). Diana presents herself to Luna an Artemis as their daughter, which freaks out. King explains aging halts after adult hood, Serenity at age 22 gave birth to Chibi-Usa and it stayed that same. The Silver Crystal gives eternal long life. Sailor Moon took over in the 21st century. After peace, an evil monument appear and made people vanish. 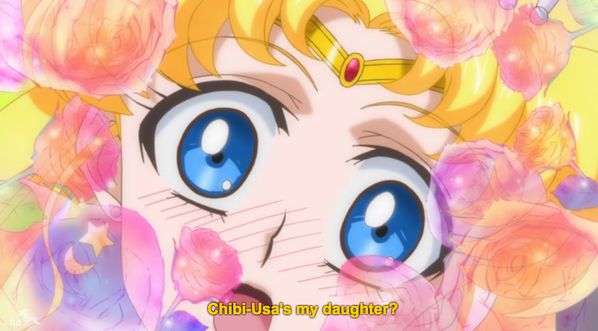 Venus asks who are Black Moon, they follow King to a room like the command room. He shows them the planet of Nemesis. Centuries ago, criminals were vanished there. It became a forbidden planet, their massive energy alerted them. Black Moon, a militant group, hijacked it. Their goal is to make Earth their own and steal the silver crystal. Luna knows it as the Malefic Black Crystal which Black Moon has been using it. Usagi and Mamoru start disappearing. King tells them to go back to the past, two same people can't stay in the same time. Moon says they have to save their friends. King says they must be on Nemesis. King tells Chibi-Usa he can't protect her but if she can help the others. Tuxedo Mask says he'll risk his life for her. King says its strange to speak to his past friend. Venus explains they had no idea about Pluto. King says Pluto's mission and position are highly different from that of them. That they are the four guardians of Princess Serenity. 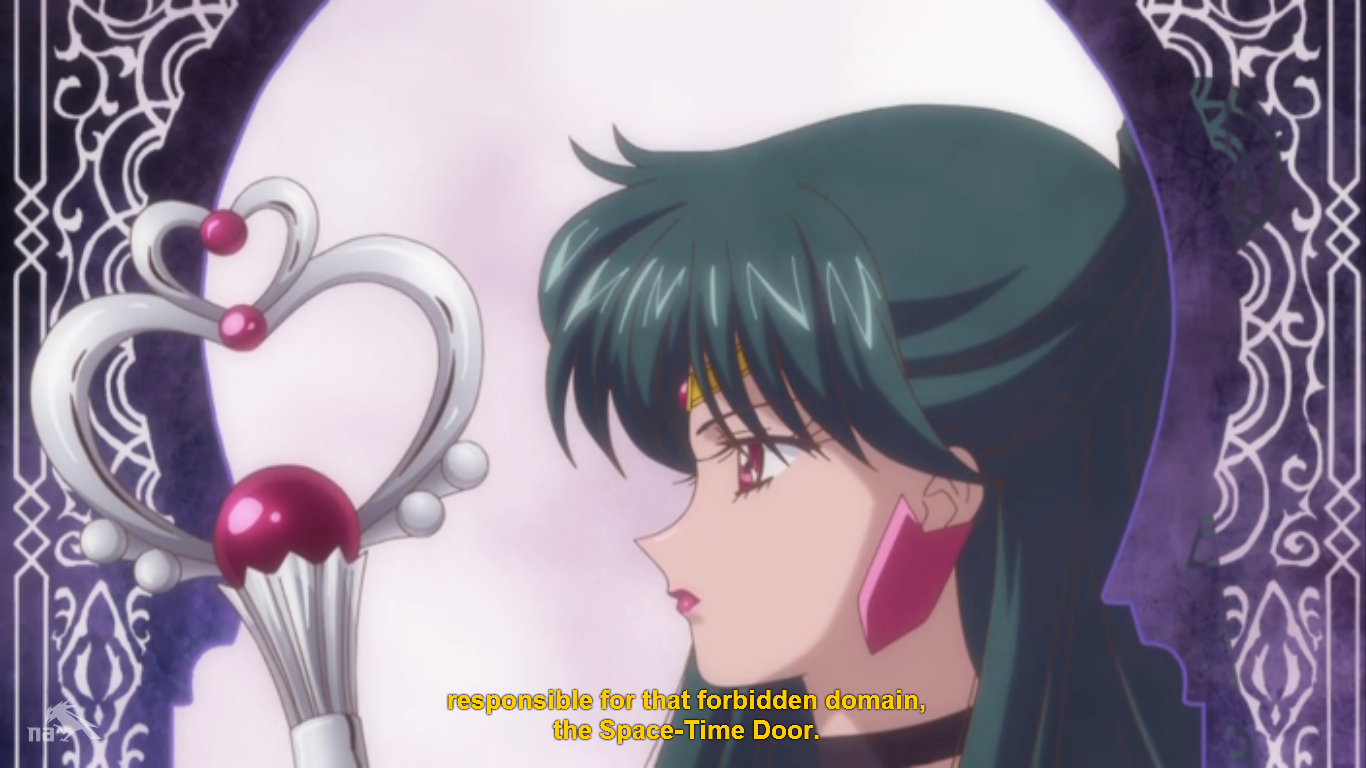 Pluto descended from the god of time Chronos. Pluto has been responsible for the forbidden door. She is shocked to see the king, who asks for the space-time key which he gives to Usagi. Sailor Pluto has experience many eras and she can defend them. Moon and Pluto shake hands. King and Diana leave. They return to their time. Mamoru says he'll take care of Chibi-Usa and Usagi should rest. Usagi thinks he chooses Chibi-Usa over her. In bed, she wonders why she is jealous of Chibi-Usa if she is her daughter. Chibi-Usa returns to Pluto. She admits she wasn't a good girl. Meanwhile, Rebeus grabs Esmeraude, she asks for another mission from Demande. 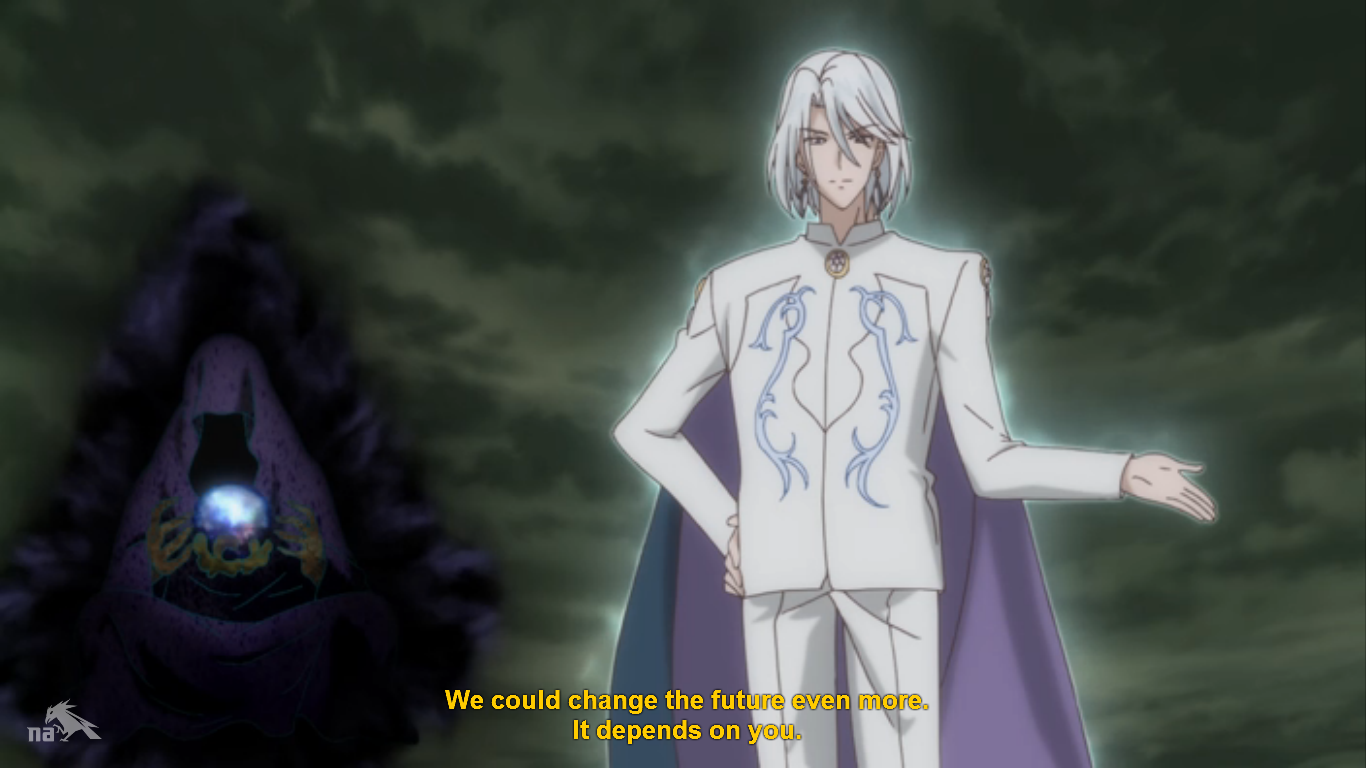 She makes her arms change. Chibi-Usa is back in the future and confronted by Esmeraude. The gang arrive and Venus uses the Love-Me CHain. Tuxedo Mask grabs Chibi-Usa. Esmeraude attacks. Moon tries her Princess Halation to no avail.  Esmeraude grabs the three heroes by their necks and suck their energy. King tells Tuxedo Mask to not give up. They both do the Tuxedo smoking bomber and destroy Esmeraude. Usagi remembers that the past crystal can only be used in the past. Demande and Wiseman appear before them. Usagi asks what they want. Demande pictures Usagi as the Queen. His black moon changes to an eye and hypnotizes Usagi and puts her in a bubble. he next ep is called Complication - Nemesis.
Review:
At least the King didn't just let his daughter wonder off like the first Anime. Also Esmeraude as a dragon was sort of skipped. Interesting episode, much like the original Anime but with slight changes in timing and addition of characters like Rebeus and Diana. Also I liked the handshake between Sailor Moon and Pluto.
﻿
Posted by Lavender Ranger at 6:11 PM