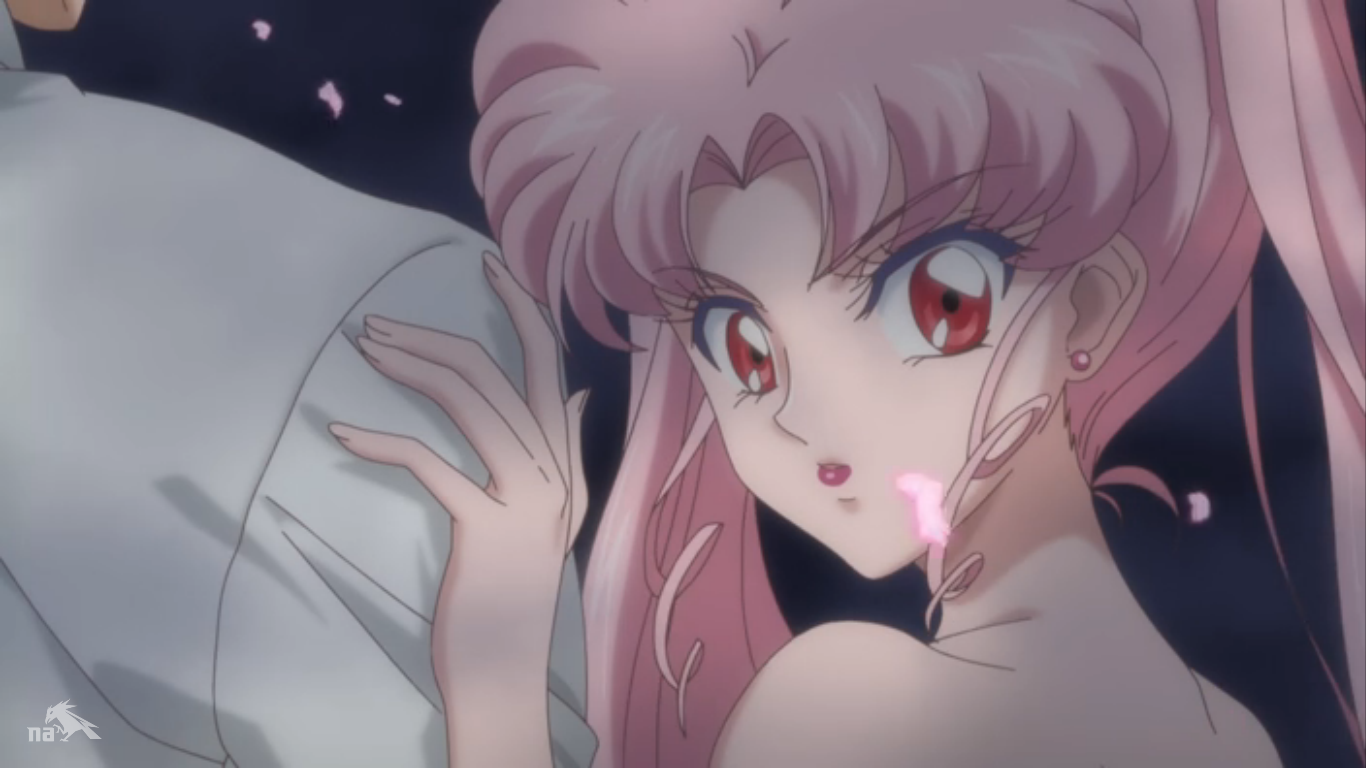 Summary:
Sailor Moon was kidnapped, Venus screams. Usagi finds herself in a void in her school uniform and sees Mamoru with an adult Chibi-Usa running away. She wakes up in the Neo-Queen Serenity getup in a bed. She finds her brooch. She sees an image of the real Queen. Demande appears and calls her the queen. He tells her to sit down, which he forces her to do so using the power of the dark crystal. Black Moon didn't like how Earth was happy. Wiseman appeared to them and told them to go to Nemesis, which had the power of the dark crystal. They attacked Earth and they sent troops to the past. He says it was their operation 'Re-play." He says long life is blasphemy to god. Usagi says he's insane. 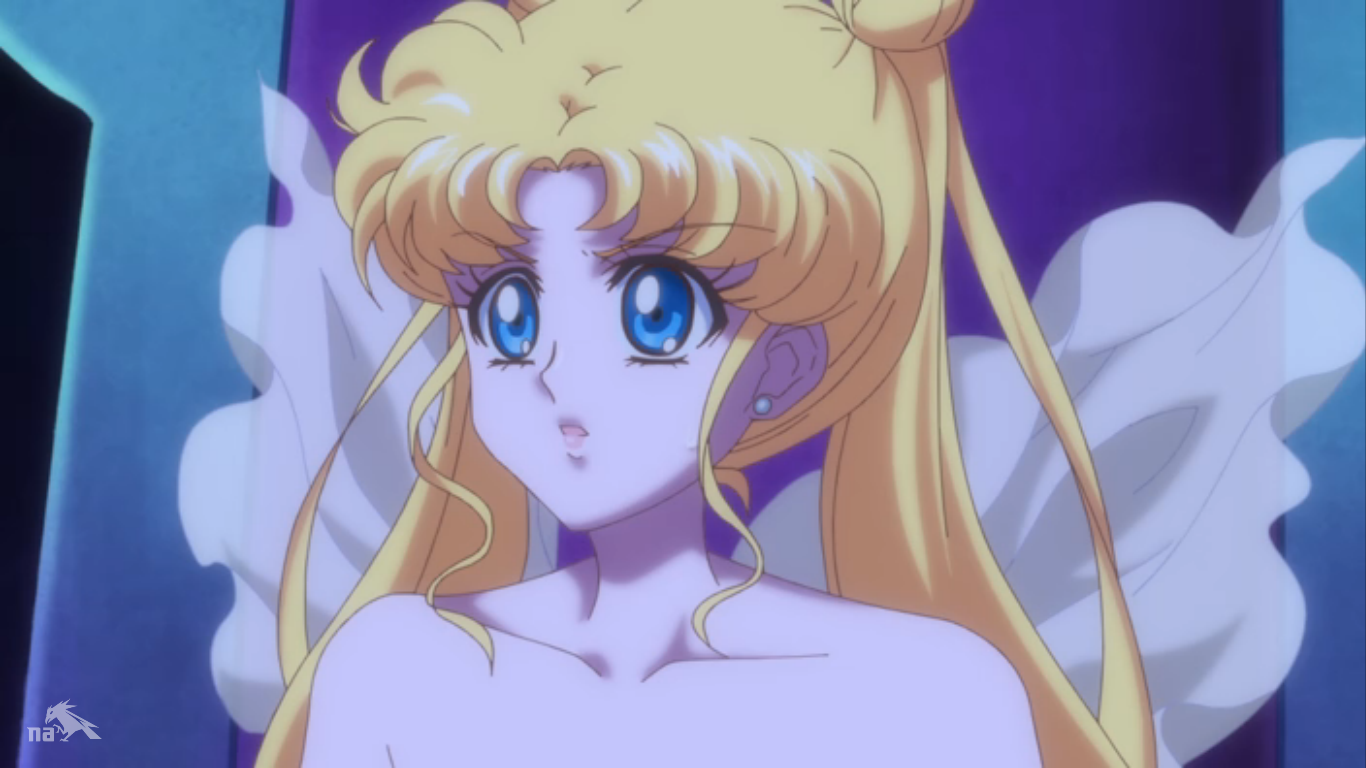 He thinks back to the crystal wiping out Crystal Tokyo. A little girl with pink hair crying on a dead body and almost being attacked by the Prince. Queen Neo-Serenity ran towards her. She looked to Demande with comtempt. His third eye glowed and her crystal power covered her. He says he couldn't forget her eyes, that he wanted her, that's why he has her. She holds her head in his hand and kisses her. She pushes him off and tries to transform, which doesn't work. He says the planet is filled with the dark crystal power. He tells her the palace will be her resting place. Back on Earth, the King says Nemesis disappeared. Venus says the Silver Crystal can save them but no one that can use it is available. Luna says Chibi-Usa can use it. 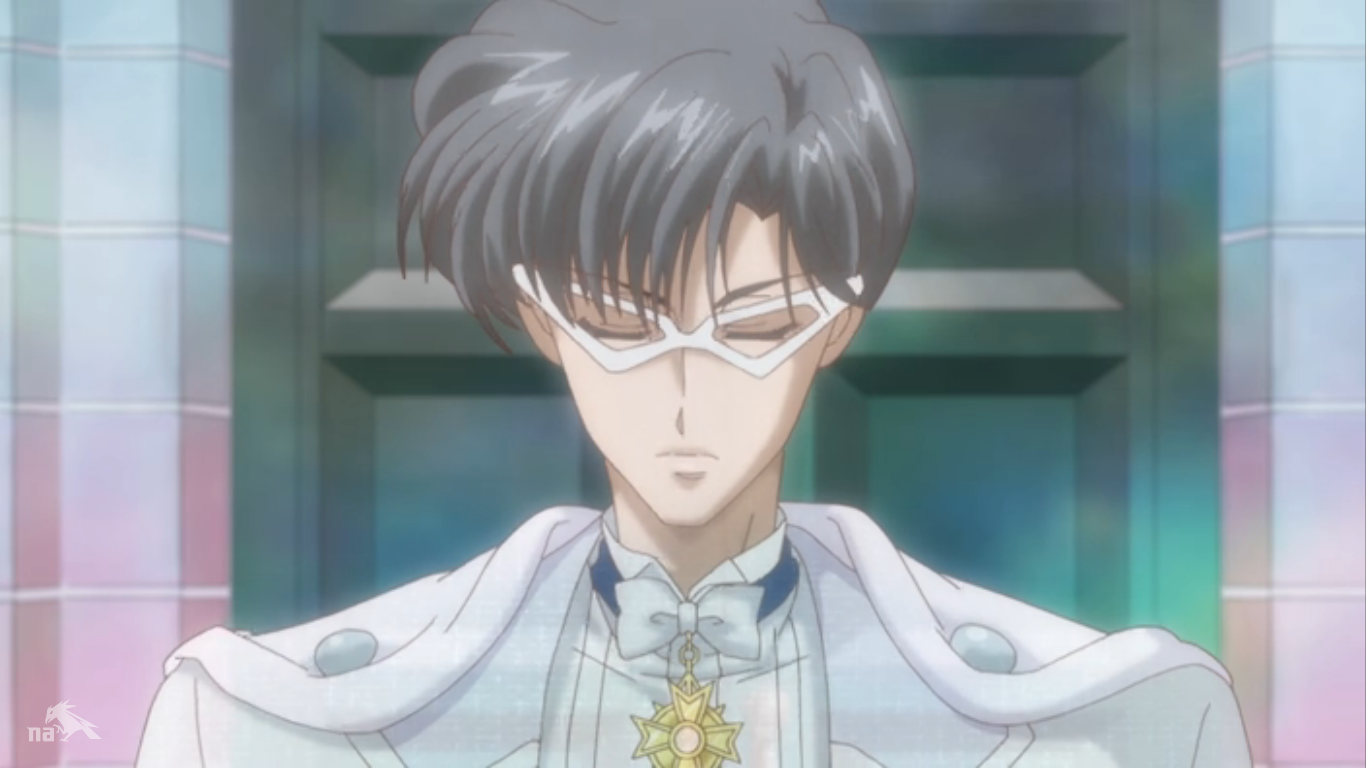 King says she has no power. She is 900 years old. She stopped growing, no power and can't transform. But he thinks she will 'awaken.' He explains that the Black Moon ruler Phantom attacked and was captured and sent to Nemesis. When peace returned, everyone forgotten and the Black Moon clan appeared. Luna asks if the Black Moon are decedents of the Phantom, King says he doesn't know. Usagi hears Mamo's call. Usagi remembers what her mother (queen) told her about the crystal depending on her heart and thinks of Chibi-Usa and how she behaved with her. Ami, Makoto and Rei wake up in a void. Makoto says she heard Usagi's voice. They try transforming but fail. They glow purple and fall. 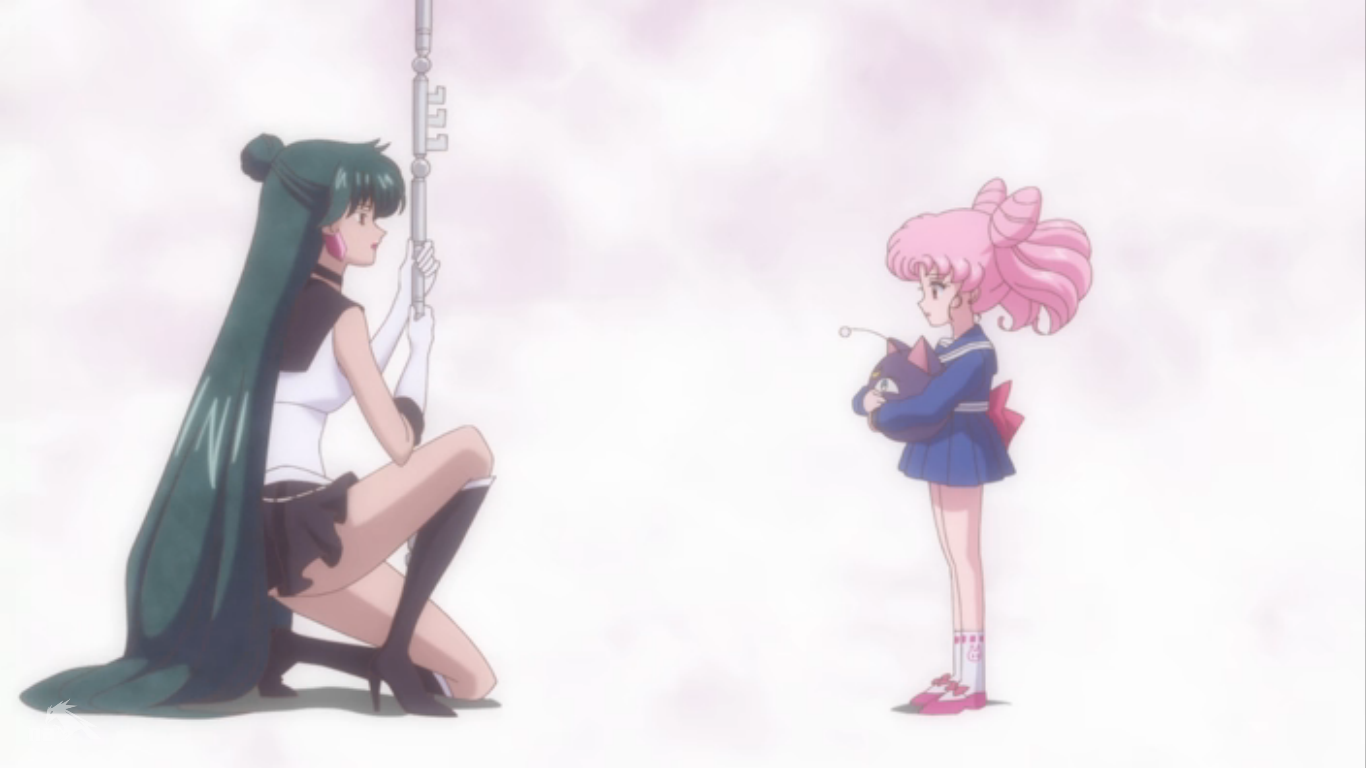 Demande and Wiseman see this. Wiseman sees Chibi-Usa in the palace. Chibi-Usa remembers asking Luna-P if Usagi was her future mom, she's just like her, a crybaby. She remembers her dad saying Sailor Moon had power. A couple kids made fun of her for not having power. The kids told her to use the Silver Crystal. She cried but the king comforted her. Her name Small Lady was given to her to grow up to be a strong lady. One day, Chibi-Usa broke the casing with Luna-P and took the Silver Crystal. The Queen came in and saw it missing. Chibi-Usa hid from her. The palace was then attacked. She remembers finding the forbidden door (hiding for the bullies) and meeting Pluto. Pluto told her she and Usagi are peas in a pod, that she will be a lady. She told her to say "Abra-cadabra" when sad, she used her Garnet Orb Rod to make magic happen. Pluto says Chibi-Usa's duty is to protect the world one day. Chibi-Usa had taken out the time key and decided to go to Pluto in present time. She goes there and finds the King with her. Chibi-Usa is shocked to see Pluto happy as she is always looking sad. (She looks happy as she has a unrequited crush on the King). Pluto finds the key and worries for Chibi-Usa. Chibi-Usa is on her own in a dark area and Luna-P blinks. She looks for the key but it's gone. Wiseman appears. He hypnotizes her and lures her in. Her hand meets his. To be Continued... 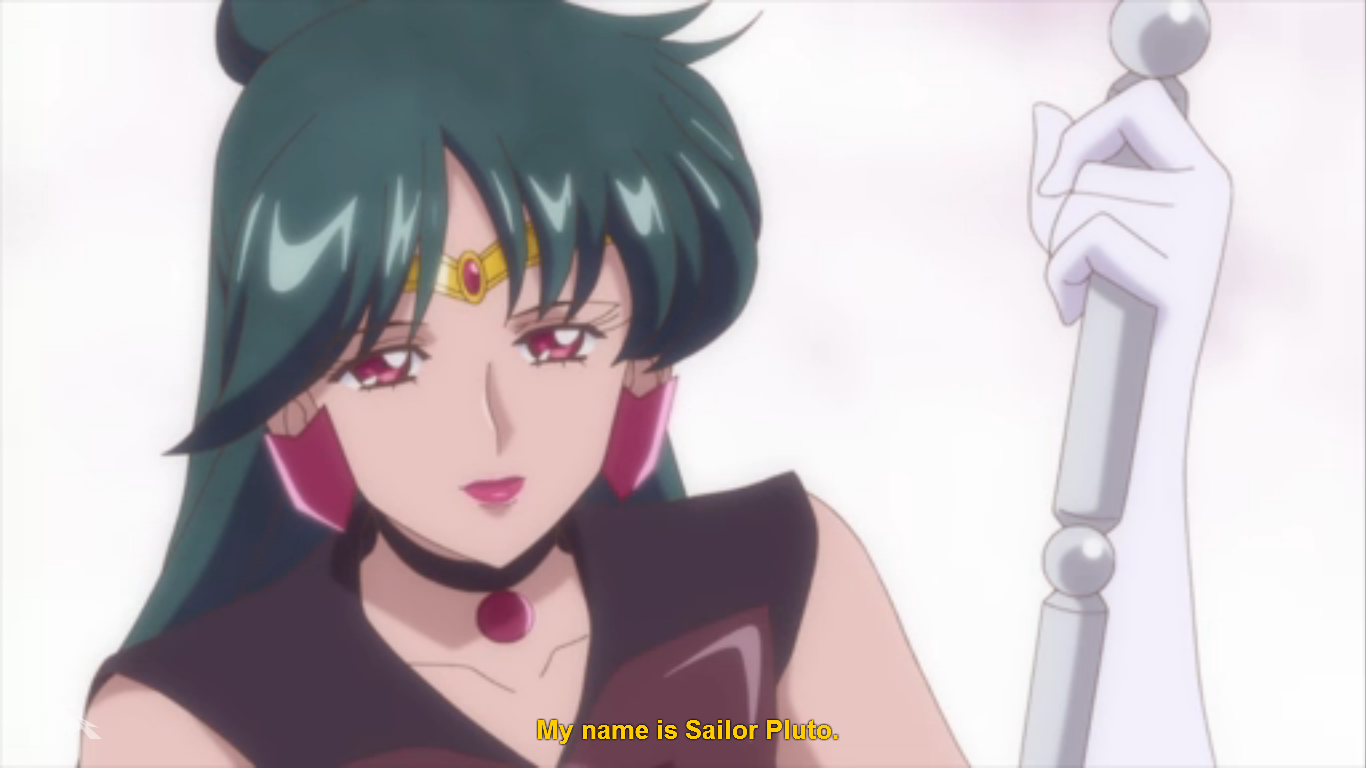 Review:
Interesting how Prince Demande is much darker and creepier than his previous versions. Most villains in the manga had zero personality and were explored more in the original Anime, except for the main ones like Beryl and Demande. Interesting how in this episode it is emphasized that Black Moon doesn't like that they (Crystal Tokyo) live forever. Also, that they aren't sure if Black Moon are related to the Phantom, while the original Anime there was a direct correlation. I swear Chibi-Usa was 600 not 900 or am I confused? Also, do all little girls in the 30th century have pink hair? I like how this episode fills in gaps the first anime didn't like how Pluto and Chibi-Usa met and Chibi-Usa's drive to take the crystal changed from jealously on her own part to being teased by kids. ﻿
Posted by Lavender Ranger at 11:27 PM