Since 2009, Super Sentai fans have known about Shinken Red and Princess Shinken Red. The only differences to their uniforms is that the girl has a red skirt with black triangles on the sides while the male Red Ranger has black legs and red triangles. 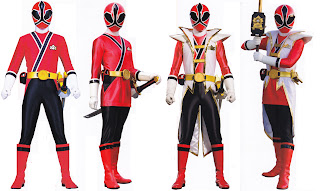 The Mega and Super Mega modes are different as the female Mega Mode Rangers have no skirts, much like the Mighty Morphin Power Ranger the movie costumes had no skirts. The different was that they had 'breastplates' which is the best I can describe it. So the same thing here, that the female Rangers have 'breasts' instead of flat chests like the male Rangers.

So naturally the female Red Ranger has breasts instead of a flat chest. Even though it is just a simple change, I like it. Where as for the regular mode, they just had to add a skirt, for mega mode, they had to make two whole new vests in red.

Posted by Lavender Ranger at 9:13 AM