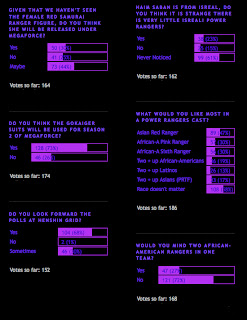 Haim Saban is from Isreal, do you think it is strange there is very little Isreali Power Rangers?
Haim Saban is an Egyptian born Israeli-American.

What would you like most in a Power Rangers cast?

Would you mind two African-American Rangers in one team?

November 21, 2011 was when the Super Samurai toys started popping up, so maybe around that time, we will be seeing Megaforce toys in store.
http://henshingrid.blogspot.com/2011/11/super-mode-in-new-power-ranger-toys.html
Posted by Lavender Ranger at 11:44 PM