Here are some confirmations:
There are three villain groups, it is not clear if all of them collectively are known as Warstar or just the first group.

Vrak
Left is his form in the Warstar ship and right is his fighting form when on Earth.

Bigs
The leader of the second group.

Metal Alice
She is the only villain so far to keep her Goseiger name. It is unknown if she will be joined by Robogogu or not. She is part of the last group.

The following image is a HQ Nickelodeon Press image thanks to Fury Diamond of Ranger Crew Blog. 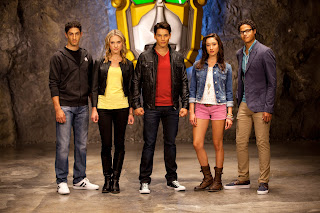 Gosei, their mentor, has been confirmed to sound like Zordon and look just like the Gosei Morpher. The voice sounds similar to the voice used for the toy and could be the actual voice. We still haven't seen Tensou. The cave we saw earlier on a few months ago has been confirmed to be the headquarters. 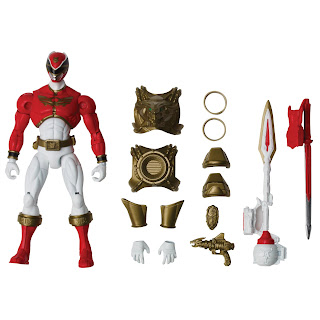 Ultra Mode is the name of the Super Goseigers. So they won't be called Super Mode and they will be coming out mid-way through the first season. So this pretty much confirms that the 'Ultra Mode' won't be used like Super Mode in Super Samurai, be used for a second season.

Here are things most people know, but I thought I'd state it anyway:
- The titles and summaries for Megaforce have confirmed that the entire 50 episodes of Goseiger will be reduced into 20 episodes of the first season. Some can still be used for the specials.
- Just like Samurai, there will be a Halloween and Christmas episodes outside of the normal 20 episodes. One is called "Robo Knight Before Christmas"
- Super Megaforce is the confirmed title of the second season, the Gokaiger suits, villains, monsters and zords will be used for the second season but Goseiger suits will be primary.
- Elements of Gokaiger will spill in the first season.
- The Legacy War of Gokaiger might be at the end of the first season or the beginning of the second season.

SPOILERS
4/29/13 UPDATED
The following image was cropped from HQ Nickelodeon Press images thanks to Fury Diamond of Ranger Crew Blog. 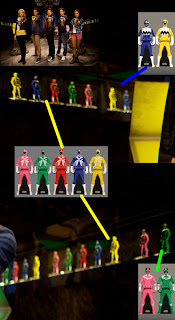 A month ago, there were little figures in a leaked photo that many believed them to be Ranger Keys. This close up picture confirms that they are indeed Ranger Keys, which are from Gokaiger. So it looks like they will be a permanent fixture in the headquarters. No explanation has been given yet. In Gokaiger, they are the actual powers of former Rangers when they give up their powers to defeat a large enemy. But my theory is that they are just representations of the past because the Legend War hasn't happened yet. The picture above are the right and left, but two sets look like Lightspeed to me. But the ones on the bottom right really do look like Time Force to me. Anyway, it could be these won't be acknowledged all season until the end.

My fear was that the Ranger Keys would not be used and wouldn't be toys, and the Rangers would use cards to transform into past teams. The Gosei Morpher having the names of past Rangers lead some to believe that. But the appearance of the Ranger Keys brings me new hope. But they could just be decoration and the main Rangers next year could just not transform into past Rangers at all. But why dangle meat in front of a lion and not give it to him?

One theory of mine is that if the source said 'Goseiger will be used for both years' it could mean like how the Gokaiger transform into Goseiger, the Rangers could alternate between the two suits. [Which we now know it is true, we saw photos ] Also Jake's console in the headquarters glowing green and not black, leads me to believe it is a foreshadowing that he might become a Green Ranger (Gokai Green). [It has now been confirmed that Jake will be Green] But people ask "How will they explain the switch?" The switch was explained simply in Zeo and it could be as simple as "Cool! I'm Green now!" Anyway, only time can tell. I probably estimate we will know by June with the Licensing Expo or some product being spilled in the summer like the Papercutz comic of Super Samurai inadvertently revealing the PRSS logo. Or maybe Saban keeps it under wraps until the toys in November 2013.

Fury Diamond has been saying that Season 1 of PRM is a homage to MMPR and Season 2 is more of a celebration of the 20th anniversary which sounds great in my book.

The above picture is from Rangercrew and the teams don't seem to be in order. Above is Samurai tot he elft and Operation Overdrive in the center. Three other teams after that are red-blue-green-yellow-pink which could be teams from the 90's.

T'wouldn't be any different than having KibaRanger alongside the Zyurangers. At least the keys are being used for something.