I have mentioned 8 inch Power Rangers figures a lot and other factors of Power Ranger toys, but I decided to cover which are the common denominators. What I mean are some trends that happened through the years and would end but be replaced by something else. Disney era definitely had lots of these factors.

8 inch figures
They were the main action figures in the beginning and were slowly replaced by the 5.5 inch figures and the last of the 8 inch figures were in Power Rangers in Space. Only the Green Ranger, White Ranger and Silver Ranger (PRiS) were initially available with their zords.

8 inch Evil Space Aliens
They had 8 inch monster figures from the first season until the third season. They were phased out to 5.5" inch monsters and villains.

Auto Morphin Figures
The most popular of the action figures, the Auto Morphins started with the season two toyline and then continued into Turbo and then came back with Lost Galaxy and Wild Force. Other series had figures that had removable helmets that were not 'auto morphers' like Time Force, Wild Force, Ninja Storm, Dino Thunder, SPD, Mystic Force, Operation Overdrive, and Samurai.

Cycles with 4 inch figures
Cycles are common in the toylines but they used to come with a 4 inch figure which was common in the 80's and 90's with Super Sentai. The 4 inch figures ended with Power Rangers in Space. Cycles started having 5.5' figures similar to the regular action figures in Lost Galaxy.

PVC Figures
These motionless figures were sold separately throughout the Mighty Morphin Power Rangers seasons. In Season 3, some were planned but were not released.

5.5" inch tall Evil Space Aliens
Villains and Monster action figures started in Season 2 and still continue, even with the change from 5.5 inches to 4 inches. But they did shrink down to how many monsters were released. In series one (above), there was 12 but then in season 3 it was shrunk to 6 to 4 for Turbo and then in Space, only one villain. Lost Galaxy and later seasons switch from 2 to 3 villains.

5.5 inch Power Ranger figures
By Zeo, they changed the form of the Ranger figures to the regular action figures we are used to. Zeo and Turbo had action features with them.

5.5 inch Action Megazord figures
Started with Zeo and continued to Dino Thunder. They did Battlized figures in SPD. They continued it with Jungle Fury and RPM. Now Retrofire Megazords have kind of replaced it.

Zord Armor/Battlized Rangers/Megazords
Time Force had it but it was cancelled. They officially had it in Wild Force. These are regular figures that have Megazord armors that change them into Megazords (or in the case of Mystic Force---Titan Zords) and this continues until today.

Battlized Power Rangers
Not only Battlizers started with Power Rangers in Space, each male Ranger had different armors. Until Wild Force, they were very similar. Only Red Ranger had them except for in Lightspeed. They aren't always called Battlizers, for example they are Mega Battles in PRLR and Time Force. They continue in the toy line until today. They started 5 inches tall, they then became bigger versions.

Ranger to Zord figures
It actually started with Zeo, where the Rangers turned to zords. They then came back with Wild Force and continued until SPD. Mystic Force had it sort of but I consider them more like the Megazord armor ones. PROO and Jungle Fury had more of an armor from their zords than actually become the zord and same with RPM. 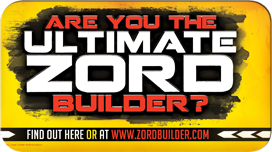 Zord Builder System
This started with RPM and continues until now and is basically merging the cycles with the zords.

Soft Attack Weapons
They had them in SPD, Mystic Force and PROO but were very breakable.

Heroes Series
This started in 1998 and they re-released the Ranger action figures from MMPR to Mystic Force, which was series 16 in 2009.

Retrofire Megazords
Started in 2008. It continues. 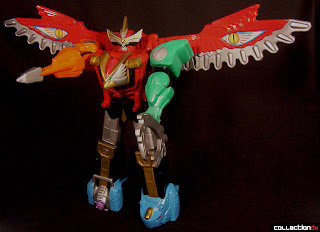 Jumbo Megazords
Started with In Space and then came back with Wild Force and Ninja Storm, Dino Thunder and SPD.

Adventure Sets
These sets came with miniature PVC figures and were more common with Disney. By Mystic Force, they started having figures from past seasons. It stopped with MMPR 2010.

Training Sets
They began with SPD, they come with mask and miniature weapon and gear. They continue til today.

Micro Playsets
Started with MMPR with Power Morpher that had mini figs inside, it came back with Lost Galaxy and continued with Megazords with mini figs in PRLR and PRTF. They had it in Turbo too.