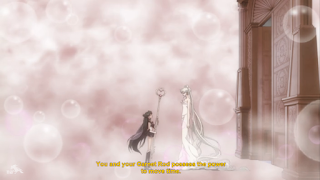 Summary:
Demande is about to put both crystals from past and present (their future) together, Pluto says to stop. The five other guardians are knocked out. Black Lady tries stopping Demande. Pluto calls her Time Stop power. Queen Serenity told her to never stop time, because her Garnet Orb moves time. King opens his eyes to see everything has frozen and has a blue tint. He realizes she has stopped time. A wave circles around the Guardians and they awaken. Luna and Artemis too. Tuxedo Kamen is awaken as well, the wand glows and he is realized from the hypnosis. Black Lady is released. Pluto's staff falls and she does to. King says she stopped time. Usagi asks what happened. Queen told her she would destroy herself if she did this act. Pluto explains Sailor Moon must get the crystals from Demande quickly. Usagi removes the crystals. Black Lady pants. Pluto wanted to fight alongside Sailor Moon, she always admired her. She begs her to save Small Lady. She coughs and tells King she must atone for her act. She calls Diana and she tells her to hang on. Pluto thanks her. Pluto apologizes to King for not protecting Small Lady and dies with the time key in her hand. Black Lady says she is alone. She remembers what Pluto said about the key. Small Lady knocked Pluto out with smoke and stole the key. She wondered if her mom loved her because she forbade her for seeing Pluto. Black Lady says she feels a feeling rushing through her, tears run down her face. Black Lady screams out for Pluto, her earrings shatter and she becomes Chibi-Usa once again, with her own crystal. 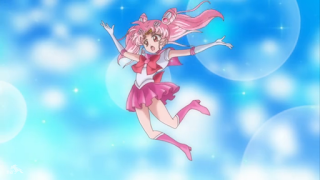 Time returns and Death Phantom speaks of the light. Chibi-Usa transforms into Chibi-Moon. Everyone is shocked. Tuxedo Kamen says she is a new guardian succeeded Sailor Moon. Chibi-Moon is sad to see Pluto dead, she runs to her and tells her she has transformed. She pleads her to wake up. Death Phantom is angry at Black Lady for forsaking her. Chibi-Usa's tears fall. Usagi is mad at Death Phantom and transforms. She uses her Moon hailation and Tuxedo Kamen backs her up and heals the rod, the guardians do their attacks and defeat Death Phantom. It returns and Demande faces off against it. DP shocks Demande with energy. He is destroyed. DP warps space. The Senshi fall down like being sucked down. They see Death Phantom's skeleton face. He says after battle, he was banished to Nemesis and becomes part of the planet. He says the past and future are in his hands.  Moon is determined to fight him. To be continued. My comment? Epic.
Posted by Lavender Ranger at 6:42 PM