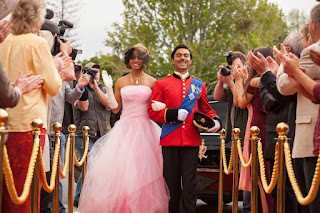 Summary:
Riley puts a sign for the Treasures of Zandar, a display at the museum. Tyler and Koda wake up Kendall, who has made Dino Drive mode which is only in the zords but it was supposedly created because Fury has the Pterazord. Shelby shows art work to Kendall that this guy Julian made, who she dismissed. Shelby is worried about Julian. The Rangers see a painting of knight Sir Ivan and the Stone of Zandar. Riley says years ago, sir Irving helped a young prince on horses and when they stopped for water, Ivan spotted something shiny. The Rangers run to danger and a box glows.

The Rangers find the Pterazord attacking the city and Koda and Chase call their zords Stegazord and Parazord to fight against it. Fury forms the Ptera Charge Megazord with a black cape. Tyler calls Rexie and forms Megazord Para-Stego formation. The Rangers enter the cockpit without morphing. Kendall says to use the Dino Drive mode which they do. Fury fights dirty and fierce. Ptera Charge Megazord forms a blast and the Stego Shield holds it for a bit.

Pter Charge is running out of power, Para Zord blasts him and he retreats. At night, the Rangers rummage through the Zandar stuff like a tiara and knight helmet. They lift the stone of Zandar and it glows. Their gems glow. They wonder why Fury ran out of power. The box busts open and they find the Gold Energem. Keeper welcomes it back, saying it is bonded to the Pterdactyl, Zandar is an old European country, Shelby says Pterdactyl fossils were found in Europe. Meanwhile Wrench powers up the Dino Charger with the gold energy from Fury, which is now blocking the energy transfer. The Dino Charger is not half charged. On the other side of the ship, Poisandra and Curio watch a gossip TV show called Glitz World about a prince going to the show and he sees the Gold Energem.

Shelby comes in a princess dress, the guys are amazed and she complains. She wears the Gold Energem. She doesn't like princesses. Kendall offers to do it, until Shelby sees how great Tyler looks and then she changes her mind. Keeper tells her that princesses don't have to be spoiled. Riley is dressed as security, Chase as press, Kendall as a limo driver and a random press guy says he never heard of Zandar. Shelby kisses Tyler which makes him blush. Shelby sees Julian drawing and she takes the drawing and says she has to have it for the castle, in order to make him famous--which seems to works. Fury attacks and slashes off the Energem from Shelby.

Fury summoned the Ptera Charge and climbs in. This seems to be Tyler's plan, Kendall has it activate and it launches Fury out as it was a fake. Kendall tells them to get Chargers. Two blue monsters (Spikeballs?) come to Fury's aid. The Rangers morph and call Dino Steel and fight the Viviks. Chase gives Tyler the Para Chopper and he combine them to make T-Rex Chopper and fights Fury. Tyler demands the charger and he is about to give it to him but he glows with gold energy. Tyler de-morphs and refuses to destroy Fury. Tyler thinks it is his dad inside of Fury. Fury and the Spikeballs leave in their spaceships. Later at the Dino Museum, Julian is on the phone about his art in London and he thanks Shelby. Meanwhile, Tyler looks at a pic of his dad. Kendall walks in and says he had to chance to destroy Fury and asks what happened. Riley says he wouldn't do it, the others say he made the right choice until he knows. Kendall doesn't know. Tyler thinks Fury captured his dad ten years ago. Keeper tells him it is never a mistake, they can't destroy him until they free the person inside.

Review:
Seeing how hard Fury and Ptera Charge Megazord slashes and bashes the Rangers in their Megazord, it makes sense if they have armor if they are standing up in the cockpit. Now that I think about it, the Megaforce and Super Megaforce Rangers sat down and the Samurai and Dino Charge Rangers stand up so it makes sense they have armor to protect them if the fall or whatever. So that's one excuse for the new modes. I guess the Rangers needed the Dino Charger to put it with the Energem to get control of the Pterazord but couldn't Kendall make another Dino Charger? And why they even need the Dino Charger if that's something Kendall invented?  I liked that Shelby had 2 hidden agendas: helping out her friend Julian and her budding romance for Tyler. We clearly know thats not Tyler's dad but interesting development.
Posted by Lavender Ranger at 12:30 PM