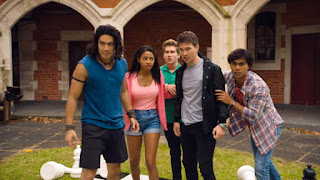 Summary:
Recovering from the last ep, the Rangers mourn the Gem tracker and the loss of the Gold Dino Charger. Koda is hungry and Kendall sent Chase to go get a pizza. The Rangers discuss the different motives of Fury, Sledge and Poisandra. Tyler is confused (he's lucky he's not on Lost Galaxy) and Riley clarifies it with marbles, that they are all seeking the same end. Chase is attacked and loses the pizza. The bad guys revel in that they have the charger and broke the tracker. Fury goes down with a new monster and Wrench. The new monster Puzzler takes hold of an abandoned building. 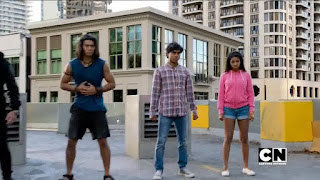 Puzzler makes the place into a maze for the Rangers to get lost in. They get split up and can't escape. Koda ends up in a room with a vending machine where he can't get the food. Chase and Tyler end up in different hallways. Shelby ends up in a stairwell. Riley figures a way out through the vent shaft. 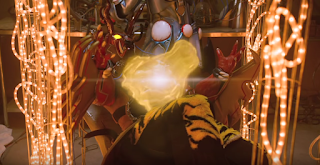 Riley sneaks a peak in a room where Wrench is trying to help Fury and he sees gold energy trying to escape, confirming what Tyler saw in the last ep. Riley comes out at the top of the building and finds Puzzler. 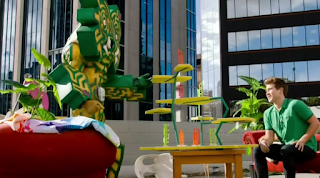 Riley plays Chess with Puzzler and throws the different marbles into different shafts, alerting the Rangers and they find their ways out through vents. When Koda finds his way out, he finds there were cookies in boxes outside of the vending machine. When they fight Puzzler when big, Fury busts out Pterazord. 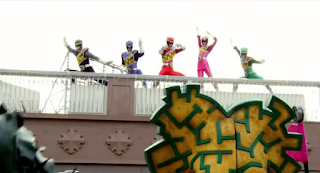 The Rangers fight the Pterazord and Puzzler and destroy Puzzler. Sledge becomes buddy-buddy with Fury with his success with the Pterazord. Tyler and Riley discuss the gold energy he saw in Fury. 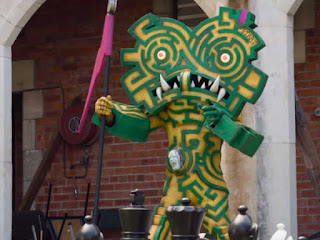 Review:
Good ep but no real advancement in plot nor in characterization in Riley as he did use logic and the definition of logic in the episode seems a bit diluted. I did like Sledge liking Fury more.

Posted by Lavender Ranger at 9:52 PM