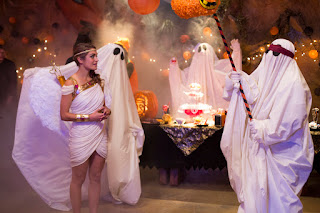 Wrench reanimates Duplicon, Sledge wants to collect his bounty and he runs off. Curio is happy about Halloween and wants to trick or treat. Duplicon falls on him. Sledge threatens Memorella and she puts her mind beam on him, making him remember how he lost the Energems. The bad guys come up with a plan. Ms. Morgan tells the Rangers to hurry up and they all come out as ghosts as Chase made their costumes. She is dressed as cupid to introduce the Cupid Charger, which will make a monster fall in love with them. At the party, Memorella appears and is undetected. One Ranger is in the kitchen and hit with the mind beam and taken by Memorella. 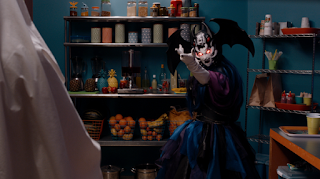 In a warehouse, Memorella takes all the memories of Power Rangers from the ghost and Duplicon makes her into a ghost customed Ranger. Curio is with them. The ghost leaves. The real Ranger is left prisioner with them. Ms. Morgan detects alien DNA and sees a video of Curio, Memorella and Duplicon taking a Ranger. All the Rangers go to the base. She tells them one of them are a fake. Duplicon leaves to Trick Or Treat which Curio does not like. Kendall takes all the gems and has them go on a lie detector (but it just goes by memories). Riley goes and is asked about how he knew Tyler and Shelby had Energems and how they flipped a car and the explosive from the 800th episode. Machine says Riley is real. 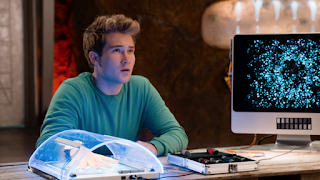 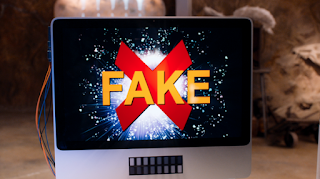 Kendall suspects Shelby and asks her why she decided to press as the princess, she says she loves princesses. Koda says it isn't how he remembers it. She felt princesses were selfish. She then says it was the outfit. Riley says she complained about the outfit. She says she did it for the Ptera Charger but we see she did it for Tyler. Kendall asks the computer and it says fake. They all gang up on her. Koda calls Kendall "Ms. Morgan" and she says she believes Shelby and gives her the gem. The captured Ranger comes in and reveals to be Koda. Kendall says Koda always calls her by her real name. The two Kodas fight and he becomes Memorella and she turns to a bat and leaves. The Rangers chase after her. They fight her. Shelby uses the new Dino Cupid Charger on the Viviks to get on her and the Rangers destroy her. 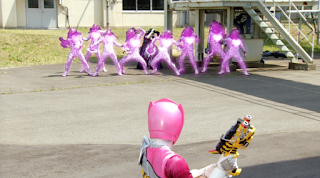 She grows big and Ptera Charger Megazord Pacha Formation is created. (Even though Pachy Zord hasn't been introduced yet!!!) They use the Wrecking Ball and destroy Memorella. Sledge is mad at Duplicon, who swears he wasn't having fun. Curio comes in with a mountain of candy exclaiming how fun it was. The Viviks go through the candy. Sledge tells Duplicon he is going into his stinkiest cell yet. Back at the kitchen, Shelby has trouble taking out the Cupid charger from her morpher. Tyler says they used good teamwork. Shelby tells him the charger is stuck, they try to fix it. Tyler asks her the truth on why she became the princess. she moves her hand and is shy and hits Chase and when he opens his eyes, they all hide and he falls in love with his reflection. 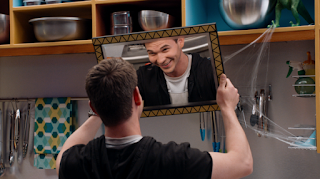 Review:
Best Clip Show ever, this tops all other clip shows. This is a clever clip show. It could have been trite with the Rangers remembering old episodes like Samurai did, but this one is actually funny and engaging and has some character elements. Such as Shelby loving Tyler but not confessing to it. And Kendall wanting to be called Ms. Morgan but is only called so by the one being she doesn't want it from. I knew the captured Ranger was not female and had to be strong since he got hit with a paintcan on the head. The episode has you think it was Shelby, which I thought if it was indeed her, it would be lame since the monster is female. But it is clever she disguised as one of the guys and the ep had you think it would be a girl. 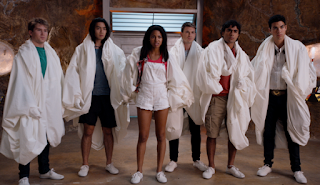 Also interesting is that Poisandra and Keeper are not in this episode, adding more fodder for those Poisandra/Keeper shippers. Yes you read right, people ship them. Or jokingly, I'm not sure. I'm too busy with work and I am currently sick. In the next broadcast episode "Rise of a Ranger" where Philip becomes the Graphite Ranger so the Pachy Zord being here is not a stretch. Kudos to Chip Lynn and the whole Dino Charge cast and crew!!!
﻿
Posted by Lavender Ranger at 1:12 PM

With the standards that have been set by production this season, it's a bit frustrating to see the Zord fight since it debuts the Pachy Zord out of sequence. Had Nick not gone to the hiatus a week earlier than originally planned, we'd have been able to get next week's episode first and thus not have the dissonance. Or they could've written the Zord fight out since it was based on a Gold-focus ep and Gold didn't end up being the fake - maybe Duplicon takes Sledge out of the ship and shows him the virtues of trick-or-treating?

Regardless, good ep and nice move to make someone other than Chase the fake (they cut out the portion of the ground fight from the Sentai ep that made that a logical conclusion). The rationale for how Koda got captured and how Kendall was able to suss out Fake Koda also fit well into the existing writing.