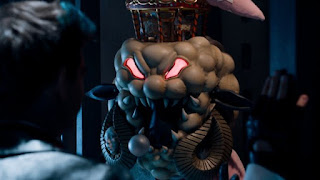 Episode Summary:
Riley asks Shelby how her accounting test went after she came out of college. She says her dad won't be happy with a B and he comes in to the diner. He says Watkins ice cream is the family business. Shelby reassures her dad, telling him he will re-take the test. He wants to quiz her and he leaves, she sighs. Heckyl tells her she looks exhausted. She says she will rest when she gets her A. He says in a sotto voice that she is sleep sooner than that. At the ship, Heckyl wakes up a monster called Nightmare. Heckyl then gives Shelby a pillow as a gift claiming it is from her father. She sleeps on the pillow. A pink dust enters her and she awakes to see Viviks. She attacks her friends believing they are Viviks. 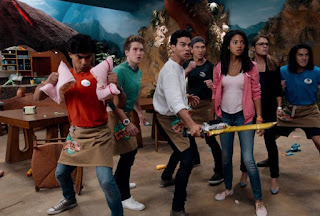 She breaks he pillow and the pink dust becomes Nightmare the monster, saying to see her in her dreams. Kendall tells them to go to the base where they examine her. There is no signs. Kendall analyzing the pillow, tells everyone not to sleep. They try to keep themselves awake with activities and studying. Chase and Koda play video games. Ivan and Riley sword fight and almost fall asleep. Kendall says until the pillow is destroyed, the spell will not break. It is time to open the cafe and they are still sleeping. At Sledge's ship, Nightmare tells Heckyl the Rangers aren't sleeping. Fury goes to 'wear' them out. 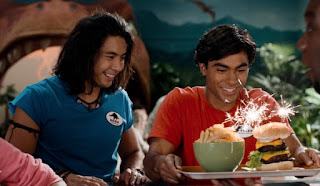 Shelby's dad comes to her and sees she is studying about dinosaurs, saying she isn't a little girl anymore and business is the future. Shelby says its boring. (I said the same to my dad back in college) He tries to un-bore her in the kitchen, going over hamburger prices and shows her a sparklers burger with fries. He says he made $4 profit. Get some boring and make it fun with profit. The Rangers get called and they run out. Chase can't find Ivan. The Rangers fight Viviks. Viviks aren't easy to knock out, the rangers are tired. Ivan arrives and takes some out but attacks the Rangers. He falls down the steps. They figure he is sleeping, the purple dust comes out of his mind. 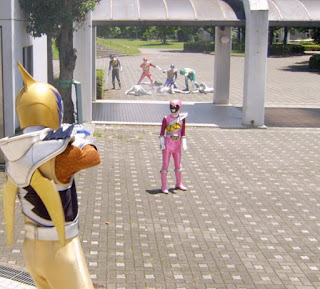 Outside the museum, they carry the Gold Ranger. Koda finds a pillow and breaks it. Riley and Shelby run to her test and bump into her dad. She asks if business won't make me happy. He reassures her. She leaves. He sees a little girl saying she wants to study dinosaurs, the dad reassures her. Shelby asks Riley if he thinks she will be good at running ice cream. He tells her he didn't want to be a cowboy at the farm while everyone wanted it and asks her what she wants. The bell rings and she goes without answering. Curio puts a pillow in Riley's helmet. (Irresponsible!) Riley falls asleep before hoping on his bike. 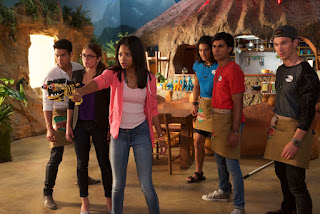 Heckyl puts pillows on the other Rangers and they take naps. He takes their energems. Shelby walks in and see their energems and grabs them. Heckyl holds the pillow and walks towards her. Shelby thinks back to Heckyl with the package and pillows and figures she works for Snide and blasts a pillow, making them all awake. She tells them Heckyl is not their friend. Heckyl says they are all friends. Shelby has figured out it is a ploy. Kendall asks i he works for Snide. His tattoo glow and he becomes Snide. The Rangers point their morpher guns at them. Snide threatens them and leaves. Snide mentions not knowing where the base is. 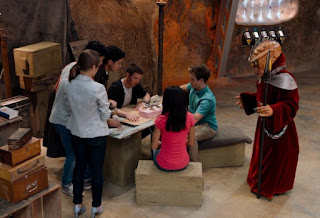 Riley is about to give Fury his Energem when the Rangers stop him and Fury knock him on a container. The pillow is destroyed and Nightmare comes out. The Rangers morph and fight Nightmare and Curio. Nightmare becomes huge and the zords are called. They become Dino Super Drive mode and Pink gets the saber as well as Red. Plesio Charge and Ptera Charge Megazords are formed as well as Stego-Raptor formation. The three Megazords fight. (Red in Plesio, not Purple) The main megazord floats up, Pink does the final attack and they do the final strike to the monster. Shelby passionately discusses fossils at the museum to guests. Her dad has heard it. He tells her that business was his dream, not her dream, Dinosaurs is her passion. She got one last favor--a dinosaur ice cream cake for them all.

Episode Review:
This felt like a Samurai episode, with the chatty voiceovers and the evil plot not going anywhere. At least the Shelby plot is moving but kind of boring. I did like that Heckyl got revealed and not too later on.  Keeper has no lines but appears at the end of the episode. I do like that Pink Ranger got the final strike in Dino Super Drive.
Posted by Lavender Ranger at 12:33 PM