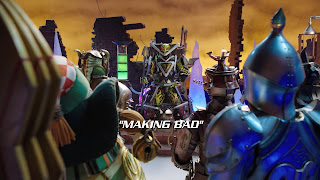 Episode Summary:
Evox wants to bring back more villains. Sledge says they have weapons from Ryjack's collection. Scrozzle can make the villain clones stronger with gems. A new Robotron are stealing diamonds. He has enough diamonds to make one. He uses a key with video records of old villains. He shows clips of Koragg from Mystic Force. Roxy comes in and shows how he turned into a good guy. She shows a clip where Koragg became Leanbow. Then Leanbow becomes Wolf Warrior in the clip. Back at the hangout, the Rangers watch a news report about a thief stealing diamonds. They wonder if the thief is invisible. Ravi says the stores are being hit in Alphabetical order. He wants to check out the next hit store, the main 3 leave. Back in the Cyber dimension, Roxy shows Astronema. Scrozzle shows clips. Blaze shows that she turned good. She turns into a Pink Ranger. Roxy is upset. Scrozzle takes out Zedd's staff and all the villains back up. He shows clips of Lord Zedd, with the wrong voice. Roxy shows how he betrayed the Machine Empire. 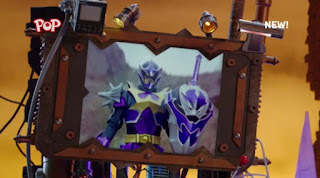 Poisandra mentions to Sledge how Zedd had a nice wedding with Rita and she got nothing. The Rangers spot a Robotron using their spy glasses. They expose Thieftron and he runs away. Devon takes the diamonds from him. Thieftron says Scrozzle needs a thousand. The Rangers morph and fight him. They go Beast-X Mode. They destroy him with the bow. They go back to Grid Battleforce and Nate tells Ravi he was right all along. Ravi says there is only one Diamond factory left. Back at Cyber Dimension, Poisandra and Sledge are still bickering. Poisandra tells Scrozzle to send a Gigadrone. Poisandra finds the address of the next Diamond Factory and leaves. Blaze thinks of the Psycho Rangers and takes out a data card. Scrozzle shows Psycho Rangers. Roxy has Scrozzle show his demise by Andros and Leo. Snide keeps searching. The Rangers arrive at the factory. A Gigadrone arrives to the city. Nate and Steel board their zords. 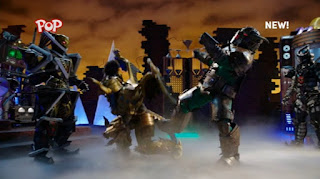 Poisandra and Curio arrive at the factory too. The BM Rangers find them. Fury and Wrench arrive. They fight. Wrecker Megazord fights the Gigadrone. It steals their blasters and blasts them. They call Beast-X King Zord. They regain their weapons. They destroy the Gigadrone. The Rangers fight the Dino Charge villains. The four do a group attack and the Rangers lose their armour. The other two BM Rangers arrive. The Rangers call their weapons and destroy the four villains. They run off. Sledge bemoans Poisnadra's death. Evox arrives and has selected Goldar to destroy the Rangers. He shows clips of Goldar, also with the wrong voice. Evox takes out Goldar's sword. Scrozzle adds the diamonds to the Reanimatizer and creates a new upgraded Goldar. Evox tells him he is his master. SLedge insults him and Goldar kicks him. Evox tells Goldar to destroy Sledge which he does. Back at Grid Battleforce, the Rangers wonder what Evox wanted. Devon figures it might have been Poisnadra who wanted the diamonds. The Rangers laugh about Steel's butt. 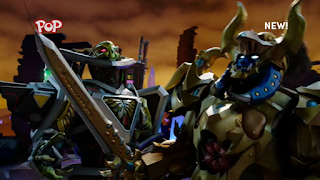 If you are going to use clips from old episodes, and can't use the original voices or audio, then don't use it. Also, why can't you get the original voice actors? I understand about budgets but what not, it just ruins the clips and episode. Plus, fans and kids could watch the original episodes on Netflix. Also, since Robert Axelrod died, it is sad they replaced his voice. Great idea and premise but not an ideal execution. If it didn't have that voice problem, it would be up there in great Halloween clipshows along with Power Rangers Samurai's Party Monsters.