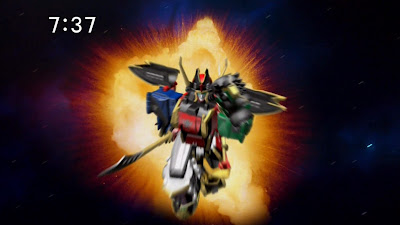 Since the Giant Robos were introduced in Battle Fever J (1979), the mecha have been a combination of puppets, stop-action animation, some robotics and men in boxy robot suits. Puppets like Magi Dragon for example, using wires. Stop-action like some robots or animals. Robotics like flying jets using radio-control, which I think they used for example for the Triceratops in Zyuranger. And men in suits were used for Tyrannosaurus in Zyuranger and the beasts in Gingaman.

But beginning in 2000 with Timeranger, they started using CGI. GoGoV is the last one that used wires, stop-action and radio-control exclusively. Gingaman had some early CGI when GingaOh was formed. Timeranger used CGI for the flying jets (above). Stop-action, suit acting and radio-control were used for the V-Rex (Q-Rex).

Gaoranger was the one that used more exclusively Computer Generated Imagery for the power animals themselves, megazord formations and megazord finishers. This trend still continues to today. 'Megazord' battles are now usually CGI with suit acting with very little stop-action animation (like with the Origamis). But it is not always CGI, for example with Gao Lion, when he would bite, we would see a close-up for a puppet (scale model). 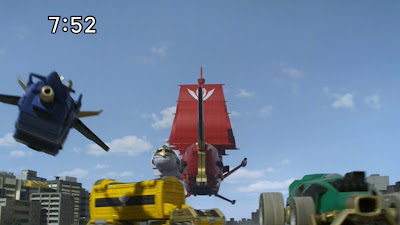 Here with Gokaiger, we see scale models, which is still used but limited.

Anyway, the debate is that they should not use CGI or do better CGI. The pictures above are from Tomica Rescue Force, where they use arguably better CGI. Fans are boards have been saying that Toei have to upgrade their software. But the Tomica series has ended and Toei has to do like 50 episodes a year, with almost zero breaks. I do agree that the CGI could be a bit more detailed.

I think the reason the CGI is not up to par and not super detailed or 'realistic' because of costs and time. But I think it can be argued that the CGI of the Megazords now are way better than the graphics used for the Ninja Megazord in the Mighty Morphin movie.
Posted by Lavender Ranger at 2:30 PM

I do prefer when they use stop-action animation and scale models on the zords.It does look a little more realistic.But I agree that sometimes they have to use CGI for some fighting sequences.We can't expect Transformers-type CGI but Toei should really upgrade their CGI programs.If money is the issue they should ask Saban for some support.After all Saban and Toie are team on producing both SS and PW.

Yes, CGI could be better, but I think it still looks way better than what you see in some made for TV movies...and there is a certain charme to it. Just like Suitmotion.

My suspension of disbelief is more charitable to practical effects. Suitmation looks as good today as it did fifty years ago.

But ultimately, Gokaiger only uses the GokaiOh CG model to do thinks a suit actor or electric model couldn't, and I can't object to that.

My only real complaint is that the leaden, cumbersome movements of a robot suit actor feel more realistic than CG GokaiOh's spry, agile motion, but that's just creative differences.

I'm more of a practical effects guy. I love the suits and puppets. CG can be good (ie. Transformers and Avatar), but I enjoy practical more. Plus, bad practical effects look way better than bad CG effects. Suitmation all the way.

Also, can someone list all the stop motion in Sentai? I did not know stop motion was used at all and I always assumed the Shinkenger origamis were CGI. Pretty cool to find out.

Old style effects are a key part of tokousatsu's success, but we also need to evolve. I think that if they want to use CGI, they should upgrade.

But remember, this is a kid's show, not a StarWars movie.

If they must use so many robots in the show (which they must no matter what the theme, since this is Japan we're talking about), please make them strictly CGI for the sake of limitless designs and graceful movements.