Henshin0:
I've Written a post recently on thing to look foward to, some confirmed and some unconfirmed. One particular item on that list has raised controversy on the comment wall and may have even damaged the ethos of this blog. I am, of course, talking about the MMPR-R Dragonzord. First, I'd like to repeat that not everything on my list is confirmed. Second the reason I believe in this, than not are for the following reasons: there are products that were sold in America, but not in England. There are products that are sold in England that aren't in America (for example some retrofires that weren't sold here until recently). Third, Rita is an MMPR-R figure but packaged as samurai anyways, so this could be too. Like I said before, that the figure was on my friend's shelf (which was the point that most people believe is the anti-ethos), but here is the photo below. 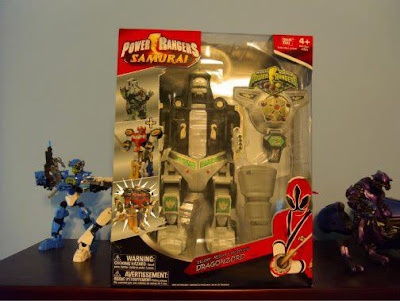 The point of this post is not to prove or disprove if this toy exists, but just for you to see the photo, and decide for yourself if this is fake or real. If you believe this is real, then you have something to look foward to. If you believe this is fake, then go ahead and disbelieve this, but at least give my friend props for doing such a good job photoshopping, because this looks too real to be fake (like a photo of Aziz Ansari with Kanye West and Jay-Z).
Again, as of yet, we of Henshin Grid cannot confirm if this is real or fake until we get further proof of one way or the other, but in the mean time, feel free to write a comment on if you believe if this is real or fake, and why. Just remember, when commenting or replying to anything us writers or even your fellow readers say, be polite and choose your words carefully because we all have feelings, and different conotations make the difference between criticism and insults.

OK, so, now that the picture's been provided, here is why I'm certain it's a Photoshop (albeit a good one).

First off, the font giving the name of the Dragonzord. It's not anything like that of the other Samurai merchandise, and that includes Rita's figure. Since Bandai even used the same font styling on the Bandai Asia Shinkenger merchandise repackages (like the Shodophone repacked as the DX Samuraizer), I can't see them suddenly changing the font for this product.

Secondly, if this is a retail product, why have we not seen reports of them being found elsewhere?

Third, if it is real, how about some more pictures? Sides, top, bottom, back? Anyone with a real product should be able to provide these.

Lastly, and perhaps the most damning of all, is the fact that this is a known Photoshop created by SONIC RANGER!! at Rangerboard. It was just recently discussed in the Samurai Merchandise thread there and was posted previously and ID'ed as a Photoshop not long after. It recently resurfaced on the PR Facebook page, likely reigniting this rumor.

Sorry to say, but it's a fake. A well made fake, but a fake nonetheless.

I want to believe its real but im not gonna hold my breath for it. If it belongs to somebody then they can provide a upc# Then and only then I will believe.

The pic was originally on Rangerboard. OP admitted it was fake.

While it looks really good, I too believe it is a fake. What got it for me is if you look at the combined photo at the bottom left of the packaging, you can kinda tell that megazord is the the original and not the 2010 version. The difference being the size of the chest shield, and the color of the sticker. Plus try comparing again the pictures on the side to each other. The middle one of the 2010 megazord is drasticly different from the bottom photo of the combined version. The bottom one is shorter and more boxy. All of that being said, I do hope they release a new dragonzord eventually.

my friend just fessed up.....who wants to help me kill him for his deciet?