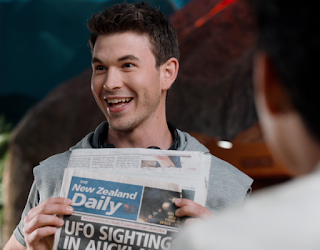 Summary:
Shelby wants a break and Kendall doesn't render. Chase shows them Sledge's transport pod over New Zealand in newspaper. Chase is excited. In Sledge's ship, a monster Meteor came for dinner, Sledge sends him back to complete his mission. The gang arrives via plane. Ivan wants to take a tour, Chase shows them the Sky Tower, music similar to the music that played when MMPR visited Australia plays. Chase says he is going home for Christmas in the south island. They see dolphins, Koda takes off his shirt and wants to swim, they stop him. They arrive at Big Foot Tours for Albert and find some traps and get trapped. Albert shows them a Unicorn horn and Bigfoot foot print. 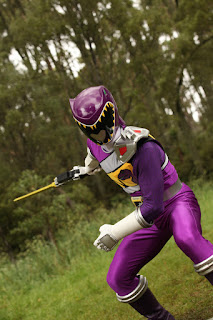 He thinks they are UFO hunters when they ask for Sledge. He gives them the photos. Chase says Albert is nuts. Albert uses a police scanner. Riley wants to get out. Tyler tells him he went Bigfoot hunting with his dad. Albert talks about adventure. They leave and thank Albert for the locations. Someone steals a bike and the Rangers go after him. The Rangers are surprised to find the Purple Ranger and he runs off. They figure Sledge wants the Purple Energem. Meteor arrives and says he found him again and sends Viviks after him. 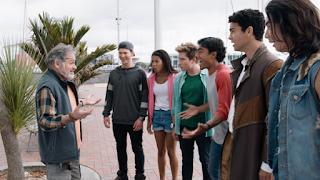 The other Rangers arrive morphed and fight the Viviks, Purple Ranger is bad at fighting the Viviks. Gold calls the Ptera Saber. Purple wimpers behind a bench. They strike Meteor and he retreats. They de-morph and find Purple behind the bench. Purple de-morphs and reveals to be Albert. He doesn't even know he is a Power Ranger or know the name of the Energem. He just wanted to do good deeds for the town. He says its a grand adventure but looks unsure. Wrench brings back Ice Age and Sting Rage. 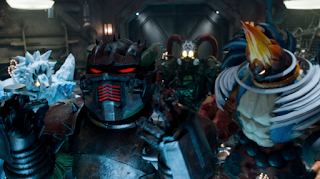 The Rangers take Albert to an obstacle course and they are wearing exercise clothes. Albert shows them he can keep up. He runs ahead of them. They take a break. They ask how he bonded to the Energem. He was hiking with friends in a mountain in a ice storm. He saved a little girl and spotted the purple energem. It bonded to him instantly and he could become a Ranger, he was stopping thieves and was a local hero. They get called about alien bio signs in the city. Sting Rage and Ice Age attack Auckland. Meteor also attacks. 7 Rangers arrive. They morph and Albert cowards behind when the Rangers go ahead. He says he is afraid of fighting the monsters. 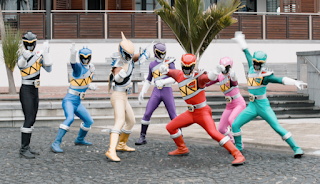 Red Ranger fights the Viviks. Purple cowards away. Ice Age fights Blue. Pink fights Sting Rage with Green. Red goes to Albert, Albert says the monsters want to destroy him. He says he never caught Bigfoot, he is a fraud. He did save a girl. Red says the Energem doesn't make mistakes, he is no coward. Meteor is about to launch meteor ball but the Rangers get it and play keep it away. Red punches it at the trio and takes them out. Sledge makes Meteor big. The Rangers wonder where Albert is, they call the zords. 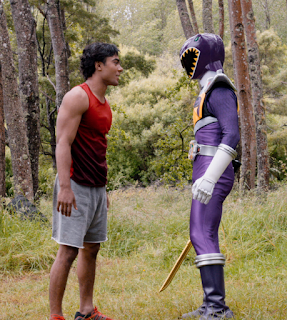 The Rangers fight without Red in Dino Drive mode and fight with the Ankylo Zord. Ice Age takes down Tyler and freezes his leg. Albert takes Tyler. Chase calls Pachy Zord. They form Ankylo-Pachy formation. Tyler and Albert arrive at his home, he morphs and says his back hurts. He tries fighting the monsters. He kicks them back into his traps. He cuts the ice off Tyler's leg. Tyler calls him a sly dog. Albert de-morphs and says he can't remain a Power Ranger. The Megazord destroys Meteor. Keeper unbonds ALbert from the energem, saying his duty was to keep the energem safe. Keeper teleports in smoke. The Rangers leave. 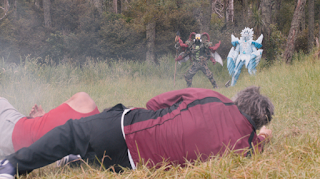 Review:
Great ep, when I heard about this ep, I thought I would not like Albert because he was eccentric and a fraud but I actually did like him. Kudos to Lynn for shooting new footage of Purple when they could used the Kyoryuger footage. I like how Keeper appeared out of nowhere but it was explained with him teleporting away so he doesn't need an airplane ticket. I don't like that Chase flew all the way to Auckland to not even visit his family. Well, when you are a Power Ranger and already saw your sister, then who cares.
﻿
Posted by Lavender Ranger at 8:13 PM