Power Rangers Beast Morphers - Believe it or Not - Episode Review 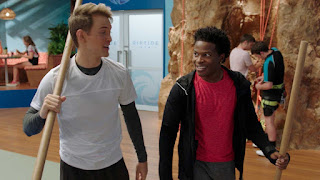 It has been a while since Evox has been defeated and now the World is aware of the use of Morph-X, so much that Paris, France has agreed to have Morph-X towers. The mayor is popular. Blaze and Devon spar at the local hangout. They discuss the new things. 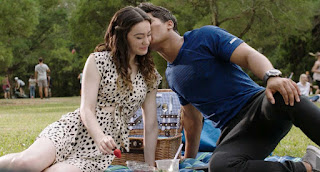 Ravi and Roxy have a romantic picnic. It seems Roxy is not part of Grid Battleforce anymore since she doesn't have a wrist communicator. Ravi is late for Ranger training and she is understanding. He goes to train with Devon and Zoey at the base. They blast at targets. Ben and Betty train too but break a jumprope machine Devon was using with his cheetah speed. 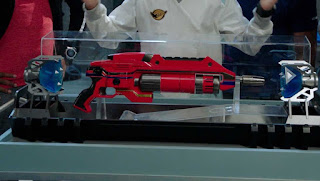 Nathan comes in with a new blaster for the Megazord. It is way too popular when Ravi uses it. Steel enters with a blackboard with strings and photos, saying he has evidence that Evox is back. Nate and the others are quick to debunk his theory. They ask for proof. He mentions a tower leaked and no one was sent to clean it up. Devon says his dad says it was cleaned up. He gets an idea and asks them to train in the forest the next day. They agree.

They go running in the forest. The forest happens to be near the tower that leaked. He shows them a picture and asks them what they see. He sees Scrozzle, they see a tree stump. He gets mad that they don't believe him and leaves in a huff. Nate realizes he hurt his feelings and they look for him. They find Scrozzle and Tronics instead. They are loading stolen Morph-X. 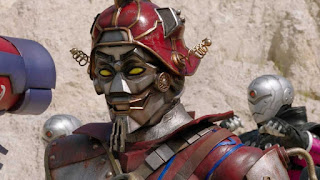 They confront Scrozzle. They morph and fight Tronics. Steel later appears and morphs and helps the Rangers. He blasts a Robotron away and the rest of the Tronics. Zoey is about to apologize when they get called by the Commander about the Gigadrones. Gigadrone land where they are and they duck. The Gigadrone makes a hole and go inside. The Robotron returns and Zoey and Steel fight it. Devon asks Wrecker Zord to lower his zord into the hole. They call the commander.

Gorilla and Cheetah Zord look at the hole. Wrecker Zord sends the cheetah one inside the hole. Two Gigatronics head to the surface. Ravi fights the Gigatronics. Deon finds Morph-X deposits. Gigadrone pops up and fights the zord. More Gigatronics arrive. Devon and the others get beat up. Morph-X level drop for Devon. Devon asks Nate to lower his hook and he uses it against the Gigatronics. He hooks the Gigadrone and it is pulled up. Zoey and Steel destroy the Robotron. They call the Jet and Chopper Zords. The Gigatronics get blasted by the zords. Chopper zord becomes a Jackrabbit and destroy the surface Gigatronics. Devon calls the Cheetah Beast Blaster. He destroys the underground Gigatronics. The Gigadrone is lifted up the Wrecker Zord and beat up by the Jet Zord. The gold Megazord is formed and destroys the Gigadrone. Back at the base, they haven't found Evox. Commander says they figure this wasn't the last attack. The gang apologizes to Steel, saying they were so happy without Evox, they didn't want to believe it. Steel wants them to go look for the Lochness Monster which Ben and Betty try to join but get stuck.

Review:
A simple story, Steel believed Evox was back, they didn't believe him and it was true. But it was nice to see peaceful times. It was an enjoyable episode and Steel is more endearing when he is actually sure about something. I like that Evox has not been revealed yet and the Mayor is only hinted to be involved in some way. What I would like answers with is what is Blaze's involvement in Grid Battleforce now if any?

Posted by Lavender Ranger at 9:36 AM