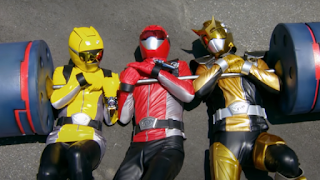 "Boxed in"
This was a special extra episode, I believe this was supposed to be Olympics-themed but because the Olympics were canceled and they don't call it by name, it is confusing.

Episode Summary:
Zoey's mom talks about the Pan Global games on the news and the Rangers talk about it. Commander needs three of them to check on the towers. Ravi and Steel really want to go. Devon is for all of them going. Ravi wants to draw names out of a hat. Nate and Steel are for it except for Devon. Ravi and Steel celebrate. Roxy watches the news and turns it off. Blaze says with the Rangers distracted, they can do their plan. At a tower, Devon, Zoey, and Nate ave one down and more to go. A new Robotron confronts them. Ravi and Steel are disappointed when called. The Rangers morph.

The Rangers fight the monster out-strengths them with a giant weight on top of them. Ravi and Steel arrive, Ravi wrestles the monster and then blasts him away. Steel tries taking it off but fails. Ravi uses his Gorilla strength to pull it off. They de-moprjh.  Ravi is upset at losing one event. He asks Devon how hard he tried without him. Cruise arrives. Devon says he doesn't care much about the tower and leaves on Cruise. Commander tells Devon of a danger. The others have trouble with traffic. Blaze and Roxy arrive at a stadium and Blaze inserts a key and it glows purple. Racer Zord is deployed.

A Gigadrone arrives and Racer Zord fights it. The stadium sucks them in and they find themselves in a giant boxing ring. Someone announces. Alphadrone gets a fancy entrance. Alphadrone fights Racer Zord. The other Rangers arrive and see what's happening on the wall. Ravi tries going in the building to no avail. Nate and Steel run off to get the Striker Megazord. Striker Megazord attacks the building but it is no good. The new Gigadrone brings in a giant dumbbell for Racer Zord. Racer Zord knocks him down and Alphadrone comes back in and kicks Racer Zord repeatedly. Racerzord gets beat up. Another Gigadrone arrives in the city.

Racerzord moves out of the way and Alphadrone kicks the Gigadrone. The Rangers try getting sucked in the building but they get spit out. They fight Tronics. Blue and Yellow go to Beast X Mode. Nate thinks of using Beast X King Megazord with the Ultrazord. Deltadrone arrives and tag teams with Alphadrone. They both fight Racerzord. Racerzord gets beat up./ Nate made the adjustments and they run off. The other zords arrive. They make Beast X King Ultrazord combine. They try diggin the building and knock out another Gigadrone. They figure out the commentator and building was a Gigadrone named Boixadrone. The Zords destroy Gamerdrone and Alphadrone. Boxadrone is the only one left. The Ranger fight. Ultrazord destroys Gigadrone. Back at the base, Ravi realizes the games are over. He apologizes for being selfish. Steel apologizes too. The five do the job together and later attend the karate final. 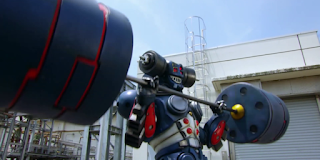 Review:
WIth its over use of footage and tacked on "lesson," this is the equivalent of a Ninja Steel episode.
Posted by Lavender Ranger at 2:04 PM