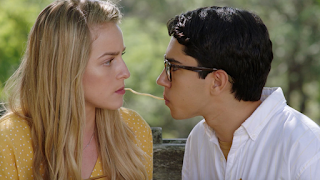 Summary:
Nate shows Ben and Betty the Beast-X King Spin Saber and Betty grabs it and it becomes a helicopter that take her and Ben for a ride. They then crash into barrels. Steel arrives and asks for help for his zord. He rebuffs Zoey. Zoey comes in with concerns on zords and Nate offers to do it tonight. Steel voices his confusion to Zoey and refuses he 'like likes' Zoey. Steel soon becomes a Zoey-Nate shipper when Zoey reveals they do like each other after he finds a dating magazine. Zoey tells him to not say anything about the rule between dating. Robo Roxy looks for Evox and gives him Morph-X so he can become the mayor.

Zoey spots them together and the mayor lies that Roxy is trying to kidnap him. She takes out guns and the two girls fight. Zoey morphs and uses Beast-X Mode. Roxy does Jackrabbit Spin strike and Roxy sparks. Roxy says she will pay and teleports away. She tells the Mayor he is safe. He thanks her. Back at GB, Nate injects a tracker into the Mayor. He is kinda mad. He asks if it is necessary. They say they can track him. Steel volunteers Zoey and Nate to be bodyguards for the mayor. The mayor leaves to not so discreetly make a phone call to Scrozzle.

He needs more Morph-X. Roxy and Blaze come up with a plan. Nate and Zoey back when Ben and Betty come in with Clothing Capsules. They throw the Clothing Capsules at them and they are dressed up for prom. Nate says they are supposed to blend in and not stand out. Ben throws one on Steel and he dons a pink dress which he likes. He offers Zoey and Nate chocolates and roses and Nate realizes what he is doing. Nate and Zoey leave.

At the Mayor's meeting at the park, Nate gives Zoey ramen. Steel is behind them and drops Nate's ramen. Zoey and Nate are force to share the noodles. They have a Lady and the Tramp moment and almost kiss. The hot ramen fall on Zoey and breaks the moment. Evox takes the opportunity and sneaks off. Nate calls the commander to say they lost the mayor. Roxy and Blaze arrive. Nate and Zoey arrive. Roxy and Blaze teleport away. They go back to the base. Commander shows them the footage of the almost kiss. Nate and Zoey confess. Commander tells them dating is a violation. Steel reveals he dropped the ramen. "What use is a rule if it makes people unhappy?" The Mayor leaves. Ravi is to replace Nate and Zoey is commanded to leave.

Zoey and Ravi check out the area while Evox/Mayor talk on the phone with Blaze and Roxy. The trio walk around. Blaze and Roxy arrive. Roxy grabs a tiara from a little girl and makes it into Tiaratron. Tiaratron gors to attack the mayor. Zoey fights her. Zoey and Ravi morph. Ravi fights the monster while Zoey protects the mayor. A Gigadrone arrives and Racerzord rides the Lion. Ravi overheats and Gold and Silver fight Tiaratron. The new Gigadron throws out Tiara drones that attacks Racerozrd. Ravi cools himself down. Ravi rejoins the fight. Blaze and Blaze become their robo forms and confront Zoey. Zoey calls the Spin Saber and fights the two robots.

Blue activates Beast-X Mode and uses  a huge gorilla fist and slams Tiaratron. She is destroyed. Zoey de-morphs. Roxy blasts but Nate takes the blast and de-morphs. Zoey grabs the spin saber and destroys the two robots. Nate and Zoey hug.. Mayor tells them well done and thanks them. Gigadrone goes after Racerzord. Racerzord destroys it--Devon uses his blaster. Back at the base, Commander sees the two hug. The gang arrive and the Commander gets rid of the rules, saying the closer they are, the more successful they are. Mayor continues coughing and runs out. Devon runs out concerned about him. The whole gang go out of the building and find out the Mayor is Evox. Evox plainly say that the Mayor is dead and leaves, but Devon states that they are share a body. 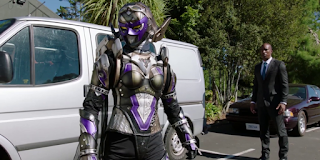 Review:
My dad watched today and he brought up why they told Commander they lost the mayor if they can track him. As for the ending, I like Evox turns around the Star Wars quote and says "I am not your father." Devon completely missing the point is hilarious but not on purpose. So now we have a whole summer hiatus (or until international spoilers) to wait to see what happens.
Posted by Lavender Ranger at 2:02 PM