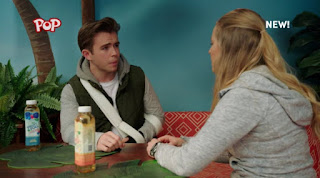 The Rangers train at the Ripetide gym. A young man approaches Zoey, he is her older brother Mike who has an arm in a sling. He shows her a claw belonging to an undiscovered dinosaur. He wants a scholarship from this and wants Zoey to help from Grid Battleforce. He trusts her with it and he leaves. Ben and Betty come in looking for their dad's dog. Ravi gets the dog. Evox gets more Morph-X. Evox praises Blaze and blames Roxy. Robo Roxy says she has to probe herself. Nate does a tune up on Jax when Zoey brings down the fossil and Nate tells ger to get an orange bottle but it is acid and it melts a container and keeps moving. She didn't read the label. It heads for the fossil and she runs for it. Nate stops her and it melts. Mike calls her and she bemoans. 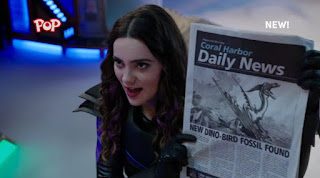 She meets him at Riptide and tells him the truth. He is upset but understanding, saying he can't get another sample. He tells her he will be okay. He leaves again. Ravi offers help. She refuses. Roxy shows Scrozzle the news about the fossils. She wants to look for it. Zoey climbs the dangerous mountain for it. Her communicator breaks. Devon shows the article to the others. They figure out Zoey went up the peak. Jax offers the Chopper Zord. Zoey teaches a flat surface and looks down. She removes her helmet. She finds an excavation site and tries to steal a piece. Zoey arrives and analyzes the fossil with the scanner she stole from Nate. The others arrive from the Chopper Zord. Nate gives Nate a new come. Roxy morphs. Zoey morphs. 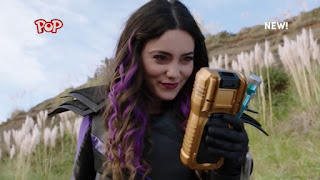 Zoey fights Roxy. Roxy gets the DNA Scanner and teleports away. Zoey goes for the fossil and gets a sample. They jump up into the Chopper Zord. Scrozzle is about to send a Gigadrone. Roxy gets the DNA and about to upgrade. She upgrades into a new mode. The DNA overloads the system and breaks the machine. Now the robos can not be regenerated. If they are destroyed by the Rangers, that is it. Roxy is not afraid of the Rangers. Roxy and Blaze leave. Zoey meets with Mike again and gives him the new fossil. He calls her crazy. She wanted to make things right. She shows him the DNA results. She gets a call and leaves. Mike is happy. Roxy and Blaze meet the Ragers, who morph. 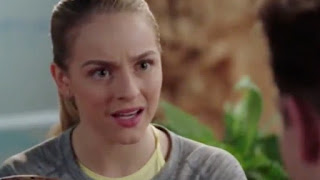 Roxy morphs and shows off her new upgrade. The Rangers fight the new robos. Red fights Blaze while Roxy fights the others. Roxy gets Ravi and Zoey in her tentacles. They upgrade to Beast X Mode and escape. Gold and Silver protect them. Blaze knocks Red down. Yellow does an attack on Roxy. Roxygrows big with a more menacing form. The Rangers call the Zords while Red continues fighting Blaze. Ravi forms BEast X King Ultrazord. Roxy fights it. They use energy fields to reflect her attacks. She crashes down. They do the Ultrastrike and destroy her. She protests as she is destroyed. Blaze looks up and can't believe she is gone. Scrozzle comes and says they can't build another Roxy. This is news to Devon. At Riptide, Devon tells them Robo Roxy is gone. Zoey is still sad. She says she made the same mistake as Roxy and thanks her friends. Mike returns and says has the scholarship. Devon gets his food. Ben and Betty arrive with the dog in the crate. The dog escapes from the crate and takes Devon his food and Devon freezes. He accuses Pickles and Ben and Betty see the dog eating the hot dog. The dog splashes the two with ketchup. 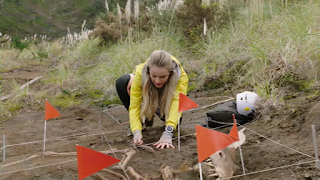 Episode Review:
I like the new fighting footage. I do not like the plot with Mike constantly entering and exiting the Riptide on the same day. It doesn't make sense one person would enter and leave a place back and forth for no reason. It would have made more sense he stayed there. Plus Zoey steals a fossil sample from an excavation site that is not sure if it was from Archeologists or Mike. If it was archeologists, they were dumb to leave the site unattained. If it was Mike's, then makes no sense Zoey got the whole entire fossil out of there. But of course, Power Rangers wasn't always for realistic logic. I mean a dog squirts ketchup on them!