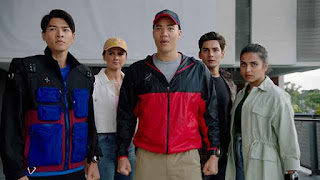 "Cut off"
Episode Summary:
The Rangers go camping deep in a forest. Izzy says how Javi ate all the marshmallows. Ollie shows off his new tech like a walking stick, boots, binoculars, chainsaw, and jacket. The gang doesn't know what to make of it. Javi says it is a lot of tech, camping should be simple. Zayto gets in the tech hammock. Izzy says it is overkill. Zayto selects the rocking and it spins out of control. Ollie can't turn it off and it breaks and flips Zayto into a tree. He say he's fine but he will stay from tech. Ollie leaves in a huff. Mucus, Roostafa, Void Knight have a balloon, which has a disruptor that will block Ranger teleportation and tech. Izzy, Javi, and Zayto find the villains. The balloon doesn't reach the correct height yet. Mucus says to roast marshmallows but Javi says he ate them all. The Rangers morph and fight Hengemen. Izzy uses her Tiger Fury Strike. Javi uses his Stego Fury Strike. 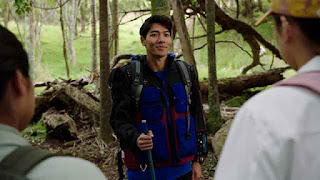 Mucus lets the balloon go and it activates. The Rangers try to teleport but it doesn't work. Amelia tries her phone but there is no signal. The Rangers can't get to the city it is too far and can't teleport. Zayto wants to walk but Ollie has an idea from batteries in his boots to make a gadget to take down the balloon. The Rangers aren't sure so they leave without him. He stays to work on it. Ollie makes up an arrow from his walking stick and a battery. Meanwhile, a Sporix arrives when J-Borg and Jean are by a fountain. Mucus gives the Sporix to Void Knight. J-Borg and Jane find the Pay Phone but it doesn't work either. The other Rangers find themselves with Ollie again as they went in a circle. Ollie throws the Hyper Arrow but it fizzles. The Rangers apologize for not trusting him and that his arrow has a chance. He wants a crossbow so has the siblings cut wood. Ollie and Zayto make the crossbow and Zayto gets the bowstring. They hook the arrow to the crossbow to shoot the balloon. Amelia says Ollie is adorable. They destroy the balloon. 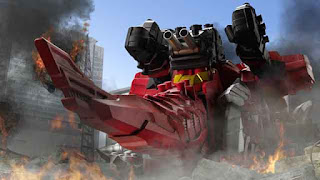 Solon is happy to hear from them and says the hotline is flooded. The Rangers teleport to him. Hengemen are sent and the Rangers morph. Mucus leaves. The Rangers fight the Hengemen, Void Knight, and Roostfa. Rangers use a Boost Key each. Roostafa becomes huge. T-Rex, Tricera and ANkylo are sent and become the Dino Fury Megazord. The Rangers teleport inside while the Siblings fight Void Knight. Roostafa flies and they change to FOrtress formaiton which protects them. Javi uses the Flare Dino Key and Izzy uses the Muscle Dino Key against Void Knight. Void Knight pretends he has been beaten and says he was kidding and teleports away. The other two zords are sent and they fight against Roostafa. The siblings enter the cockpit and they make the Megazord Warrior Formation (5 zords). Zayto calls the Megafury Saber. They do the Dino Mega Slash and destroy it.
Mucus looks for the SPorix but the Rangers get it before her. Void enter the Sporix he got into the machine. Mucus asks if it is enough. He says they have to stop the Rangers first. Back at the forest, they ask Ollie if he brought everthring. He shows them jackets and the jackets can become Sleeping bags. Izzy presses the wrong button and calls the life raft button and falls into bushes. She first seems upset but is atually happy and wants then to try.
Review:
I am not sure how I feel about this ep. First it makes a good point of not relying on tech but then it makes a strong point for it, even though Ollie's devices are glitchy at best. I guess the point was to trust your friend even when you think they're wrong? I don't know... I did like the plot point of cutting the Rangers off from teleporting, I just wish the forest was more threcherous for them.
Posted by Lavender Ranger at 9:50 AM