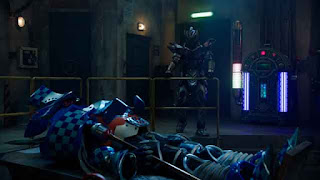 "Phoning Home"
Episode Summary:
Mucus makes a new general Slyther and updates the Ranger info from Boomtower. Void Knight puts the Sporix inside the robot and brings it to life. He becomes Void Knight and scares off Mucus, who wants to be best friends. Slyther tricks Mucus again. Void Knight tells him to steal Sporix from the Rangers. Zayto makes another call for Rafkon. Solon gives him an old Rafkon recipe but it turns out to be dog food he would give to his pet. Zayto thanks her for the idea. He sends the message. Slyther sees this. At Boom Blast, Ravi videos Jane revealing a collar that changes J-Borg into a cat. There is a girl with a German Shepard in the 'audience.' J-Borg dons cat ears and flees from the dog, who chases after her and they make a mess of the offices. Jane goes after them. The Rangers get called. They train with Zayto at Dinohenge. Lightning hits and a strange woman arrives. She says her name is Arla, a knight from Rafkon, she even has the antennae. Zayto is full of questions. 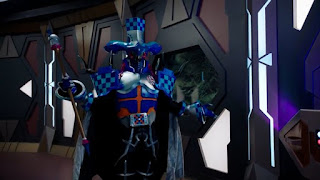 Arla touches the Rangers and states who they are. She says technology has improved and can destroy the Sporix. They go in the base and Solon doesn't trust her. Arla says her ship is fast. Solon says her equipment hasn't detected the ship. Arla says her tech is outdated. Solon says Sporix can not be eliminated. Solon wants to read her mind but Zayto says he can trust her. Arla is sleepy and the Rangers take her to a chamber. Zayto and Solon talk, Solon says it is too good to be true. Arla changes back to Slyther and calls Void Knight. Void Knight attacks the city and the Rangers arrive and morph. They fight the Hengemen. Arla returns to base and Solon offers her food. She eats it and says she enjoys it. Solon calls her out that it is dog food and she should know. Slyther reveals himself and teleports Solon out. Solon and Slyther fight. He attacks her and knocks her down and takes her communicator. He becomes Arla and she teleports back to base. The Rangers defeat the Hengemen.
The Rangers circle around Void Knight and he teleports away. Arla puts the communicator on the table and the Rangers arrive. They ask for Solon and Arla says she went for a walk. The others leave to find her. Arla wants to take the Sporix to her ship. Zayto notices the communicator on the table. Arla asks him to open the vault and he does so but grabs her arm and finds out she is really Slyther. He transforms to his true form. They teleport out of the base. Zayto morphs. Zayto tells the others as he fights Slyther. The Rangers arrive and the Hengemen appear to and the two groups right. Red calls his Dino Key and does the T-Rex Fury Strike. He becomes Roostafa and grows a giant. Zayto calls the zords with his password: Zayto is cool. (Even though 'cool' is a modern version of the word) They call the Megazord Warrior Formation.
They use the reflection from the sun to blind him using the Slick Key. Roostafa falls. They attack him with 3 attacks. Jane looks for J0Borg. J-Borg comes up behind her. She hisses. Jane takes off the collar and she returns to normal. She coughs up a hairball. Roostafa flies. The Rangers destroy it in the air and Slyther lands on powerlines. Mucus arrives and Slyther has lost his memory. Mucus tells him that they are best friends. They teleport away. Zayto makes Solon Buttermint tea and the Rangers repair her. Zayto apologizes. Solon says she is proud of him. The Rangers think he will find his people. Zayto sends another message.
Episode Review:
I don't know why Zayto has to send a second message and the word 'cool' meant something else thousands of years ago. I did like the performance of the actress playing Arla, she reminds me of Katee Sakaoff. I wish she was a guest character more often but oh well.
Posted by Lavender Ranger at 10:14 AM