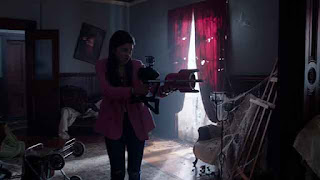 "McScary Mansion"
Amelia's grandfather Pop Pop is cleaning the McClary Mansion and thinks there is a ghost. He is spooked and leaves. Back at Buzz Blast, Javi and Aelia talk about how much she wants an assignment about ghosts and wants to prove Ollie wrong. Pop Pop arrives (he came to fix the AC at BuzzBlast) and tells Amelia what happens which gets her excited about going to the mansion. Javi warns her. She takes the keys that Pop Pop leaves behind by accident. She goes with her ray back inside the mansion. She finds a Sporix Beast. She wraps Amelia up. Amelia and the monster get out and the Rangers come to the rescue. Tombtress zaps Javi with a ray that makes him emotional and cries. They tell Javi to not get involved. 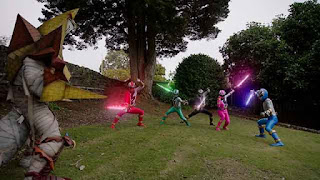 The Rangers fight Tombtress. Tombtress zaps Amelia and makes her angry. Tombtress and Mucus leave. The Rangers don't know what to do with Javi and Amelia, who are still affected by the ray. They return to BuzzBlast and Javi has calmed down but Amelia not so much. Pop Pop comes for the keys and Amelia doesn't have them, she tells him that the Rangers came to save her. She berates him since she is still under the ray influence. Pop Pop goes after the keys at the mansion. The Rangers talk and Javi gives Amelia the keys he found. At Area 62, Void Knight's assignment for Tombtress was to find something with immense power in the mansion. Mucus convinces him to send Tombtress to defeat the Rangers. Amelia as the Pink Ranger finds Pop Pop and he has found a Boost Key. He reveals that Amelia's parents were lost long ago and he promised to take care of her. She is toughed and has masked her voice. She then gets a call from the rangers. 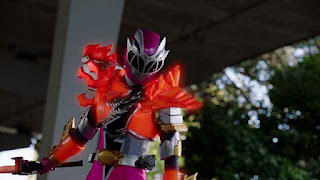 The Rangers fight Tombtress and she makes Izzy super scared, Zayto super lazy and Ollie super happy. Amelia arrives with the key and dons Blazing Battle Armor and fights Tombtress. She becomes huge. Three Rangers are still moody. Amelia gets Zayto's key to call the T-Rex and it shows up but also Dimetro Blaing Zord appears. T-Rex Blazing Megazord is formed. The Rangers are transported in but three of the moody Rangers sit it out. Javi and Amelia fight. Megazord fights Tombtress. They destroy the Tombtress. Pop Pop fixes the AC at BuzzBlast. It seems to be too windy. Pop Pop says he has to make an adjustment. He apologizes to her. Jane goes in and it's too hot inside. Amelia apologizes and says she is thankful for him. They hug. He says her parents would be proud. Jane comes out of the freezing office. She challenges him to a snowball fight.
Review:
It is truly awesome to see Pink Ranger in an armor which her counterpart did not don in Ryusoulger (the armor exists in Ryusoulger but Pink never wore it). Also, a great story connecting her grandfather and also giving backstory to as to why Amelia likes the paranormal, she believes something mysterious happened to her parents. Maybe she thinks she can find their ghosts? Also nice to have an episode with Jane solo and not with J-Borg. Not that I hate J-Borg but it is nice to see them apart. Also nice to see Javi and Amelia communicate in BuzzBlast which we don't see that often. The scene between Pink Ranger and PopPop is really touching even though one person is in costume. It all comes together with Pop Pop's performance, Amelia's voice acting, and the Suit actor's acting.
Posted by Lavender Ranger at 8:02 AM