Episode Summary:
Izzy is holding hands with Fern and is coming out of high school. She calls her "my girlfriend.' She has to retake her electronic test. Fern says she could have helped her. Izzy kisses her cheek and says she's okay. The Rangers arrive and ask about the test. Ollie is his usual pretentious self when they get a call from Solon about Haverely Park. They arrive and find everyone unconscious on the ground. Javi and Izzy's dad arrives and he gets hit by a purple cloud. He yawns and falls asleep. His children come to his aid. Solon calls about a Sporix at the Chemical plant. Red, Blue, and Pink go to the beast while the others check out a sound. A machine blasts a purple beam. Izzy tells Ollie. The Rangers hear a similar whirring sound. Zayto sends Ollie. Ollie nods and opens the machine and it has a blue ball. Ollie thinks he knows and unplugs the cables. The others sigh. Ollie explains Izzy how to shut it down. Izzy is not sure. The monster arrives and the trio morph. Hengemen go after them. 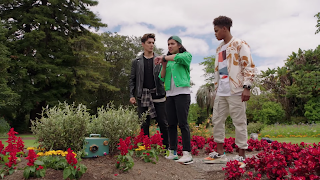 Izzy and the boys open the machine. Javi says Izzy knows how to do things. Izzy pulls out the blue blob and the system overloads and zaps Aiyon and Javi. They fall asleep. The others wake up but not Javi and AIyon. Izzy teleports them away. Mucus laughs. She takes the machine and teleports away. Red, Blue and Pink keep fighting Hengemen. Stone SNare says hackneyed slang. He is destroyed by the three. Pink gets the Sporix ball. Ollie gets the sleep trap. They teleport back to the base. Javi and AIyon are under beds. Izzy explains what she did. She apologizes. Ollie asks how she could mess up something so simple. She says she is hopeless at electronics. She says she can't put her head around it, everyone expects her to get good grades. Ollie says she should have let him tutor her. Solon asks Ollie for help with the device. Solon thinks Izzy can help. Ollie scoffs. Solon says if books don't help, maybe hands-on will help. 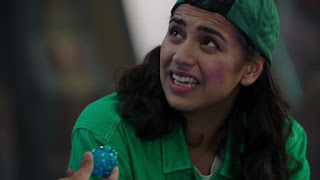 Ollie explains the device to Izzy. He shows the capacitor. Meanwhile, Mucus blabbers on about what happened. He tells her to be quiet. He is working on a Mega Sleep Bomb. There are two more Stone Snares (Stone Sad and Stone Mad), they cry about their brother. Izzy tries the machine and the two Rangers wake up. Sporix Beasts have the big machine and the Rangers arrive. Hengemen are called. Ollie is to disable the bomb. Ollie falls asleep when the purple mist comes out. The monsters grow. Izzy puts her jacket on the bomb and it says vision impaired. Rangers morph and call Zords. Izzy tries bypassing the block. The Zords' blasts don't work. The two monsters merge into Stone-Rad. The two Megazords combine into Fusion Ultrazord. Izzy keeps working on the bomb, the bomb says "Nice try." She then tries parallel like Ollie told her. Zayto calls the Saber. The Ultrazord destroys Stone-Rad. Stone-Sad calls out for his brother. Zayto asks Izzy for status. With 12 seconds left, the Rangers teleport to her and she has it offline. Mucus gets two Sporix and teleport away. Aiyon makes a bad joke. Later, the Rangers wait for Izzy. Izzy says the results are tomorrow. Fern shows her the A. Izzy says books are touch for her, she learned that doing things 'hands on' is better. They find Amelia's grandfather who is cleaning leaves. He falls into a bunch of leaves. He has his device doesn't work. Izzy says she will check it out. He happily goes with her to fix it. Fern says "That's my girl."

Izzy officially calls Fern her 'girlfriend.'  And she kisses her on her cheek. It is not on the lips but it is a step forward. I  love this episode where it shows there are different types of learning. Some learn from reading books and some learn from touching. I am a teacher and there are different types of learning: visual, kiesthetic (tacticle), audiotory, and more. Kinesthetic is hands-on. What is terrible is that now with the Corona Virus, it has been harder for young tacticle learners to be able to touch anything in order to learn. Most episodes on TV about a kid that has trouble on tests don't try other approaches to learning. So I appreciate the effort. I also like that Jane and J-Borg are not in this epsiode and only Amelia's grandfather has the comic relief.

Posted by Lavender Ranger at 9:55 AM