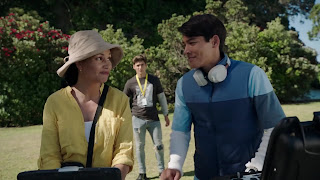 Episode Summary:
Javi gets on Ollie's case for disappointing him for help at work. Ollie is more concerned about technology. The other Rangers mention his new phone and smartwatch. Jane gets Javi a case on a strange storm. Ollie says his mom is all over it. Zayto says the Nexus Prism went into the bay. Javi asks if he could interview Ollie's mom but he says she is busy but he can do it. Javi tells him to be on time and he leaves. Ollie meets with his mom with her scanner gear. Ollie tells her to get a new laptop. She says laptops aren't cheap and hers will do fine. She tells him to be patient. Mucus and Slyther are watching them, they want to steal the info Ollie's mom collects. Ollie sees people running away. Ollie goes to the source--a Sporix becoming a monster. He calls the others. He confronts it and morphs. 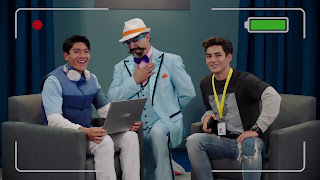 He fights it. The others arrive and Red dons the Blazing Fury Armor. Mucus and Slyther watch. The monster cancels the fire with water. He knocks the five down. The monster leaves, the villains go after it. Ollie goes to check on his mom. She is fine. The Rangers decide to leave. At BuzzBlast, Jane has Mr. Wiz (Slyther) with a bubblegum challenge. Ollie and Javi are ready to be in an interview. Slyther offers a laptop which Ollie wants. Ollie uses logic and math. Javi tells not to count gumballs until after the interview. Ollie and Javi sit and Javi begins the questioning but Ollie seems more preoccupied with the gumballs. Ollie wants a pen. Javi reminds him to continue the interview. Javi asks another question and Ollie says 2046 and "Mr. Wiz" says he is the winner. Javi tells him to hold on a second. Ollie thanks him. Javi says they are not done. Jane stops the video. She talks to Mr. Wiz and not Javi. Javi tells Ollie he screw up the story. Ollie says Jane is happy and with the laptop--quicker answers about the storm. Slyther/Mr. Wiz smiles. 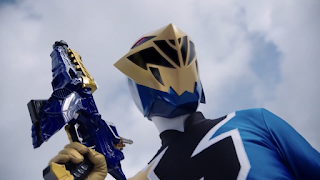 Ollie hooks up the new computer but Javi and Ollie's mom are not so sure. Ollie's mom asks how he won it and Javi says it was a whole thing. The sub drone pulls something to the surface. It looks like the computer has been hacked and the sub drone is being controlled. Javi says the laptop is very convenient. Ollie calls the others. Back at the base, they ask about what is happening. ollie asks Solon to scan for signals. Solon says there is a shortwave signal. Slyther is steering the subdrone. Ollie and the Rangers arrive. Slyther makes them realize he was Mr. Wiz and teleports away. Tidemare (Monster of the Day) fights the Rangers after they morph. The rangers use their keys. Tidemare disappears and reappears with an attack. Dr. Akana can't control her equipment and finds Slyther and Mucu with the subdrone device. The subdrone drags the glowing device. Mucus gets the device. It glows. Someone comes out of it. The two teleport. Dr. Akana says it is incredible. 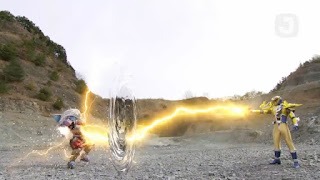 Javi uses Hyper Strike but the splash shield knocks them down. Gold Ranger comes into the rescue. Zayto says "Could it be?" Gold Ranger fights Tidemare. Hengemen arrive and Gold fights them. Gold does his Mosa Slash and uses his Electro Key in his blaster. He cocks the weapon and dons armor--Electro Battle Armor and does the Electro Fury Blast. He destroys the Splash Shield. He creates the Gold Fury Blade Blaster by combining his weapons. He defeats Tidemare.  The Rangers de-morph. They ask wh he is. Gold says hi to Zayto. He teleports away. They ask him who he is. Zayto is lost for words. Zayto gets the SPorix from Izzy and teleports away as well. The Rangers are surprised. Ollie calls his mom. They go talk to her. She explains the Gold Ranger came out of the container--which looks like the base one. She says all the power in the pod must have created the storm. Ollie and Javi talk.

Ollie says Slyther played him and he let Javi out. He says he has to focus more on the things that matter and offers him his new headphones. Javi thanks him. Ollie asks if he still needs a BuzzBlast story. Later, Jane is trying to get 3 contestants to blow big bubbles. It throws gumball in the air which J-Borg swallows. J-Borg makes a big bubble. It is too big that everyone backs away. It explodes all over Jane and J-Borg. Javi wants to pitch a story.

Review:
Nice episode, I like the bond between Javi and Ollie.

Posted by Lavender Ranger at 4:11 PM