Here are some random people or Rangers (switching colors) who became a ranger for one episode in Power Rangers. I'm sure there are more, I just don't know any, so please post the ones you remember and I will post them here. I am not including Alex (Time Force) or Sky's father (SPD). 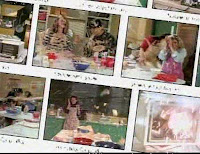 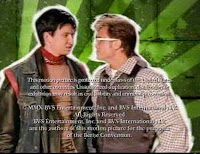 Billy as Pink and Kimberly as Blue (MMPR)
In the first season episode "Switching Places," Billy and Kimberly accidentally switch bodies when Squatt messes up Billy's machine. The story didn't match the footage, I would had liked it if they shot some new footage of the Blue Ranger acting like Kimberly and the Pink Ranger acting like Billy. In the reversion, they could had changed the backgrounds but they didn't. 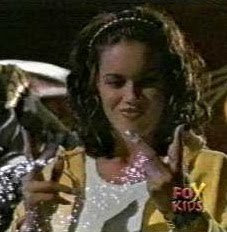 Sky (SPD)
To avenge his father, Jack gives Sky his morpher and he morphs into the Red Ranger temporarily before he is ultimately assigned to be the Red Ranger. Bridge showing up as the Red Ranger in "Once a Ranger" suggests Sky switched colors once again and most likely Shadow Ranger.
Posted by Lavender Ranger at 8:43 PM

Billy and Kimberly way back in the first season (when bumbling Bulk and Skull also switched bodies).

would kat in spd count?

What about Astronema in Space when she switched bodies with Ashley? Yes, she later became a Lost Galaxy Ranger, but she never had the Space powers.