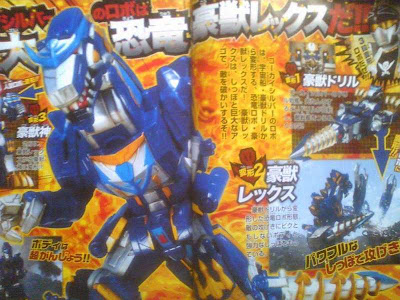 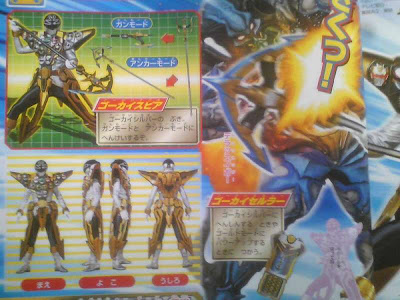 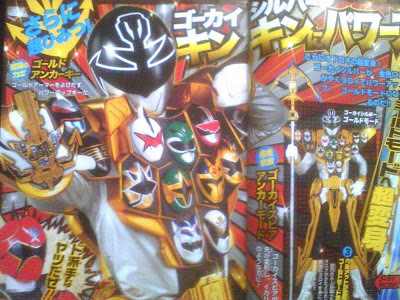 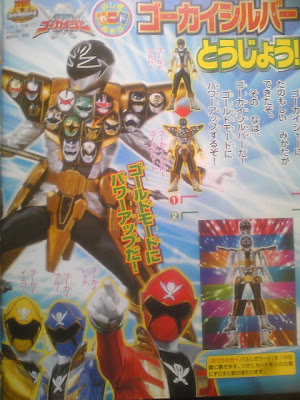 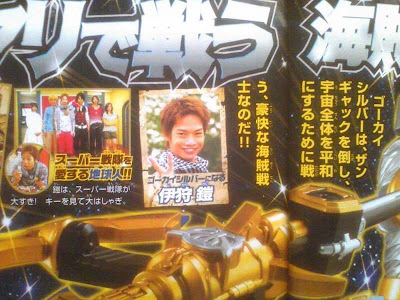 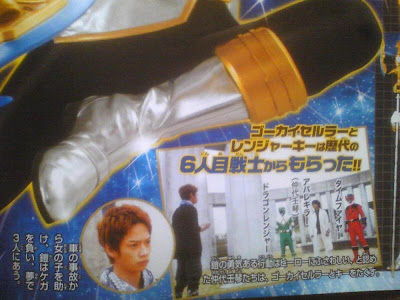 Gai saves a girl's life from a car accident, but was hurt. He then meets AbareKiller (the real actor Koutaro Tanaka as Mikoto), DragonRanger, and TimeFire in his dream. The 3 previous 6th rangers approved his heroic action and sees Gai as a worthy candidate for the new 6th ranger, they then pass GokaiCelluar and Ranger Keys to him.

This is after the keys are taken back from Basco. This probably takes place in Episode 17. And by the way, Shurikenger is also another dead sixth ranger, they probably didn't include him because he is a repeat color. And yes, I know those three colors were Tommy's as well, interesting coincidence. 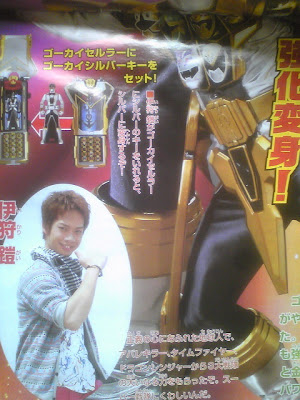 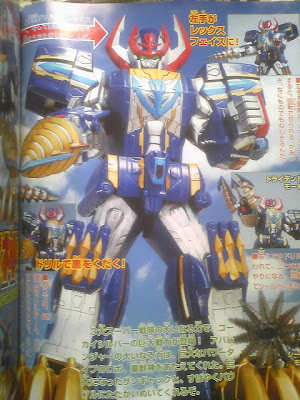 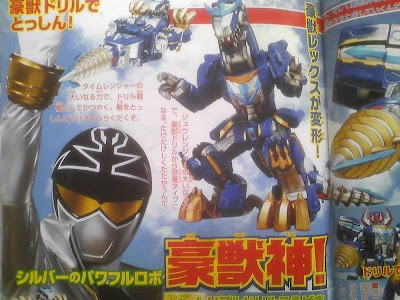 Doesn't the bird drill by itself look like the Lifebird from GoGoV (Rescue Bird from Lightspeed Rescue)?

Ep 16 Clash! Sentai VS Sentai
Basco demands Marvelous to hand over the Ranger Keys, GokaiGalleon and Navi as a ransom for the release of Joe and the others

Ep 17
Navi tells the crew to "search for an awesome man in silver".
The group went out into the streets to search and sees a young man approaching.
Although Marvelous becomes suspicious of the man's weird behaviour, he ends up ignoring him.
Zangyack appears, and the Gokaigers fight against Action Commander Armageddon

he appeared in a 5 sec cameo, it was his spirit.

so the rangers that appear before him are all dead? i know dragonranger died but im not aware the others did

Cool to see that Mikoto's back. Would be nice if, somehow, they included Kou (Kibaranger) as an adult.

Possible they might make a even more goudy 'Battlizer.'

While it's a completely different kanji, Gokai Silver's given name (Gai) is the same one as another dead Sentai warrior (Gai Yūki).

cant wait to see how the 6th ranger keys are taken back from basco. the episode hasnt started yet but i already hate basco. wish to kill him! hahaha

Maybe I'm reading too far into this, but there might be another reason for having Dragon Ranger, Time Fire, and Abare Killer appear.
From what we've learned, Gokai Silver's mecha (Gorjyujin) will be based on a dinosaur.
Dragon Ranger's Dragon Caesar bears some similarities to a dinosaur (I think) while the Zyurangers in general dealt with dinosaurs.
Time Fire's V-Rex is based on a dinosaur.
Abare Killer, along with the other Abarangers, also dealt with the dinosaurs.
So it might be the fact that they all had connections to a dinosaur.(And there is also the fact that they are the one's on the top of the gold mode armor.)

I totally agree with Jason 嘉陞 Kuo
Gokai Sliver Mecha is dino because, Timefire Mecha is a dino, Abrakiller is a dino, Burai also a dino...and this make sense guy :D , I look into details...
the reason that the writer wrote that GokaiSliver obtain power after saving by average fanboy Gai because, this mean actually mean that fanboy like us, is like Gai...plus this make more connected to the story...and we are GokaiSliver!

i wish gokai-silver was barizorg revived. it would work so well for silver/blue teamup (old partners) or even a silver/red teamup (joe's partners)