I cover Tokusatsu, but 'Henshin' also has to do with transformations and technically what follows is a Sentai and done by Toei. I am always interesting in Heronies. For those who don't know, 'Magical Girl' is a genre of Anime and Manga. 'Magical Girl' is about a little girl or teenage girl with some magical friend and magical powers. Sailor Moon changed it by having them fight evil. Some still don't fight evil. But here is a franchise called Pretty Cure and the reason I bring it up is because it usually runs after Kamen Rider on TV Asahi. 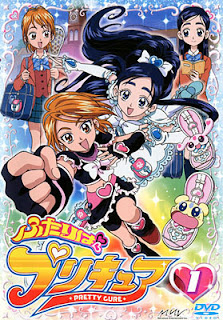 Futari wa Pretty Cure (2004-2005)
Futari wa Pretty Cure (Together, We are Pretty Cure) was created by Izumi Todo. The original Pretty Cure series, directed by Daisuke Nishio aired on TV Asahi between February 1, 2004 and January 30, 2005. It is the only Pretty Cure series to date to have received an English language version, which aired in Canada from March 2009. It revolved around two girls, Nagisa Misumi and Honoka Yukishiro, who encounter the Mipple and Mepple, who give them the powers to the fight the Dark Zone: a dimension of evil that has encroached on the Garden of Light and want to do the same to Earth. The initial run of the series has Cure White and Cure Black searching for the Prism Stones, and they place them in a heart-shaped device known as the Prism Hopish. Later in the series, Porun, the Prince of the Garden of Light, grants the Pretty Cure duo use of their Rainbow Bracelets as they defeat the Dark King. The heronies used the color schemes of Black and Pink; and White and Blue. It aired alongside of Dekaranger and Kamen Rider Blade. 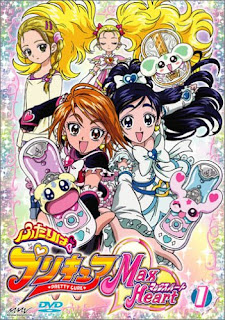 Pretty Cure Max Heart (2005-2006)
Pretty Cure Max Heart continues the story when Nagisa and Honoka meet the mysterious Hikari Kujou, revealed to be the "Life" of the Queen with no memory of her life before and powers scattered in the form of the "Heartiel." But as the Pretty Cure duo attempt to find the Heartiel, remnants of the Dark Zone are protecting a mysterious boy suspected to be the "Life" of the Dark King. Cure Black and Cure White fight back these new enemies with Hikari backing them up as Shiny Luminous. It introduces Shiny Luminous/ "Life of the Queen" in human form after the Queen got split apart following her last encounter with the Dark King. Going under the guise of Akane's cousin and working at her takoyaki stand, Hikari enrols into Nagisa and Honoka's middle school two years under them and becomes friends with them. She had a color scheme of Pink and White. Aired alongside of Magiranger and Kamen Rider Hibiki. 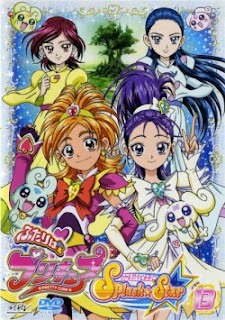 Pretty Cure Splash Star (2006-2007)
Saki Hyuuga and Mai Mishou met after they followed glowing balls that flew towards the Sky Tree,  situated on top of a mountain in their town. 5 years later, they met again at the same place and became the new legendary warriors PreCure. Spirits from the Land of Fountains, revealed they chose to protect the Fountain of Sun hidden in Earth. Later they are upgraded from Cure Bloom and cure Egret to Cure Bright and Cure Windy with help from two additional spirits. The villains of this series are the Dark Fall, who are searching for the Fountain of Sun, the last of the seven fountains that feed the source of all life forms for all worlds. Their color schemes are unique as they are not the traditional primary colors. It aired alongside of Boukenger and Kamen Rider Kabuto. 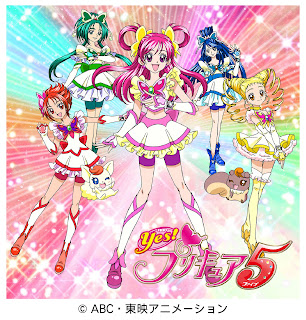 Yes! Pretty Cure 5 (2007-2008)
Nozomi Yumehara finds a magical book and a creature from the Palmier Kingdom. Nozomi decides to help restore his world, which has been destroyed by the Nightmare, by completing the book and finding the 55 Pinkies to make any wish come true. S, she proves she has the heart to be a Pretty Cure and is given her Pinky Catch from a pink butterfly letting her transform into Cure Dream. Meanwhile, the Nightmares are fighting the cures to steal the Dream Collet and defeat Pretty Cure. To help, she chooses a team of four other students. Together with Cure Rouge, Cure Lemonade, Cure Mint and Cure Aqua, they form the Pretty Cure Team. The series has made use of butterflies as the main theme, also to the extent that the girls transform with the phrase "Pretty Cure, Metamorphose!"; which refers back to the butterfly theme. This is the first team of Pretty Cure that is of five and they have the basic Sentai colors. It aired alongside Gekiranger and Kamen Rider Den-O. 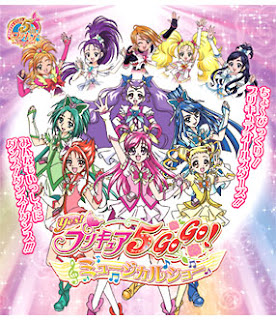 Yes! Pretty Cure 5 GoGo! (2008-2009)
In the direct sequel series, the Cure Rose Garden has always been concealed from human eye. However Eternal, an art organization known for amassing treasure and artwork from many worlds, is trying to get to the garden. They first invade the Palmier Kingdom and four other kingdoms. Flora senses the approaching danger and sends a letter to Nozomi and the Pretty Cure 5. Their new mission is to find the four rulers that have fled from their kingdoms since they hold the Rose Garden Keys. To perform this mission, Nozomi and the others regain their ability to transform into PreCure Five. It aired alongside of Go-Onger and Kamen Rider Kiva. 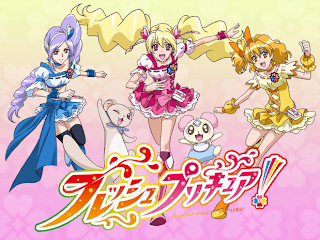 
This is the first Pretty Cure series to cater in outside the target audiences' age demographic extending beyond young girls. It's also the first to feature more mature-looking characters and Cure costumes which resemble fashionable outfits. All subsequent seasons have followed thus, with due emphasis always paid to costume design. The series's main themes involve traditional playing card suits, as well as fruits and clovers; these symbols and objects are strongly associated with the cures, magical devices and attacks that the series' characters use. Love Momozono is a 14-year-old student at Yotsuba Junior Highschool that tends to care more for others than for herself. One day she visits a show of the famous dance unit "Trinity" and decides to become a dancer, too. On the same event, subordinates of the Labyrinth Kingdom show up who want to collect the unhappiness of the audience. Love gets the power to change into Cure Peach and fights them. Soon after, she is joined by her good friends Miki (Cure Berry), Inori (Cure Pine) to begin her life to protect all worlds and compete in the dance contest. The Pretty Cures are of Pink, Yellow/Orange, Blue and Black/Scarlet. It aired alongside of Shinkenger, Kamen Rider Decade and Kamen Rider Double. 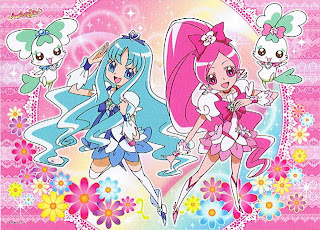 HeartCatch Pretty Cure (2010-2011)
The series has two main motifs. One is fashion, which is referenced to Tsubomi joining the fashion club, which is part of the storyline. And second is flowers, which are prominent in the naming of numerous characters and items, as well as in the main storyline. Additionally, most episodes contain at least one reference to the language of flowers. In each person resides a Heart Flower, which is connected to the great Heart Tree that watches over everyone. Protecting this tree are the Heartcatch PreCures, who defend it against the Desert Apostles, who plan to wilt everything and turn the world into a desert. However, when the current PreCure, Cure Moonlight, is defeated in battle and the Heart Tree loses its flowers, she sends two fairies to seek out her replacement. They find Tsubomi Hanasaki, a shy new girl to become Cure Blossom. Joined by her new friend, Erika Kurumi, who becomes Cure Marine, they fight against the Desert Apostles who transform the wilting Heart Flowers inside people into monsters known as Desertarians. By defeating these monsters, they gain Heart Seeds which allow the Heart Tree to become healthier again. There is four Pretty Cures in this series: Pink, Blue, Yellow and Purple. It aired alongside of Goseiger, Kamen Rider Double, and Kamen Rider OOO. 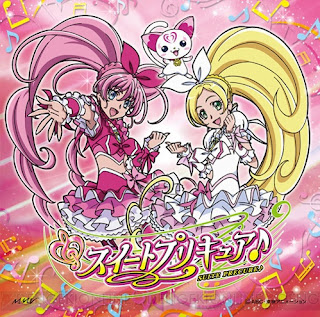 Suite Pretty Cure♪ (2011-2012)
Produced by Toei Animation, the series is directed by Munehisa Sakai, who directed the One Piece anime series and character designs by Akira Takahashi, who previously worked on Kaidan Restaurant. A manga adaptation is also being serialised in Kodansha's monthly Nakayoshi magazine.  The series theme is music, which are prominent to the names of the Cures and the magical devices they use. In Major Land, a Melody of Happiness is due to be played, spreading happiness throughout the world. However, an evil Mephisto steals the Legendary Score, plotting to turn it into a Melody of Sorrow to spread sadness. Aphrodite, the queen of Major Land, scatters the Notes that make up the Legendary Score into the human world and sends a fairy to Kanon Town in order to recover them. There, she meets two girls, Hibiki Hojo and Kanade Minamino, who are chosen to become the Suite Pretty Cure in order to recover the missing Notes and protect everyone's happiness. The Pretty Cures are Pink, White, Blue and Black. It alongside of Gokaiger, Kamen Rider OOO and Fourze. 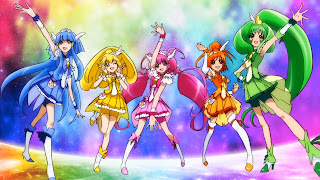 Smile Pretty Cure! (2012-Now)
The series is written by Shōji Yonemura, who is best known as the head writer of Glass Fleet and Kamen Rider Kabuto. It started airing in February, alongside Go-Busters and Kamen Rider Fourze and soon Wizard. The kingdom of Märchenland, where various characters from fairy tales reside, is attacked by Pierrot, the emperor of the Bad End Kingdom, who seeks to direct the world towards its worst ending and steals the Cure Decors, which power Royale, Queen of Märchenland. Using the last of her energy, Royale manages to seal Pierrot away. However, his minions seek to revive Pierrot by harnessing the Bad Energy from Earthlings. Royale orders a fairy to search for five legendary warriors, the Pretty Cures. Arriving in the town of Nanairogaoka, she encounters Miyuki Hoshizora, a new transfer student, who soon gains the power to become Cure Happy. Joined by her new friends become Cure Sunny, Cure Peace, Cure March and Cure Beauty respectively. The team colors are Pink, Orange, Green, Yellow and Blue.

Posted by Lavender Ranger at 7:39 PM

this anime should be adapted to live action...

more female sentai or rider would be great...