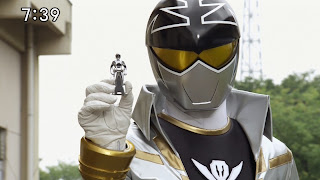 It has been found through Twitter by fellow Power Force Member @Iam_DarkBlaze New sides for Power Rangers auditions on Showfax (Sixth Ranger/Zador) : http://www.showfax.com/type_selection.cfm?l=1&c=power+rangers#sr

Rumor is that this could be for Gokai Silver, for season 2. But who knows, maybe it is for Robo Knight. Other Power Force member Fury Diamond has bought the casting side and posted it on his Megaforce Cast.com: http://www.megaforcecast.com/extras/casting.php

There is not much to the casting side. It has the character Zador trying to hit on 'Sadie' which is the placeholder name for Pink and then a scene where he tries to figure out if she is the monster that changes form or not. Also, Evan Crooks @Evanrockssocks that audtioned before for the Red Ranger is up for this role and also Peter Adrian. Evan Crooks does look a bit like Gai Ikari from Gokaiger! That's all for now. More soon!

Posted by Lavender Ranger at 10:13 PM

I hope its for Tensou/GoseiKnights human counterpart. MegaForce hasn't even premiered yet to look for Gokaiger counterparts imo...