Unlock the Power Sweepstakes: For those who are confused or Don't Know 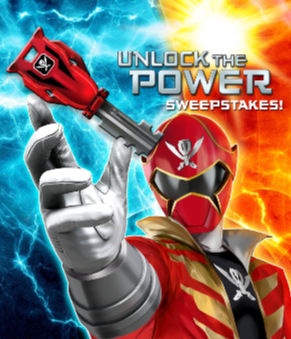 https://www.powerrangersunlock.com/
For official rules check the above link (official website) or check out Fury Diamond's at RangerCrew Blog (http://blog.samuraicast.com/).
Bandai has been nice enough to do coupons lately for Power Rangers toys, some for limited time, some for 5 months (like this case) with Morphin Madness on March 2014, go go Megaforce last year and in 2012 the Bandai website with the Zord Builder Sweepstakes. This 'Unlock the Power Sweepstakes' was announced at the New York Toy Fair 2014. It started June 23rd and ends December 31st. So here are some steps for those people who might not know how to join the sweepstakes or are confused by it. Believe or not, I was confused too until I scanned the keys.
1. Scanning Keys (Update your app!)
It says you have buy toys with Ranger Keys but all you got to do is scan any key you have but your app has to be updated. Sometimes the Ranger Key scan app is automatically updated. In the case of my phone, I had to manually do it.
2. Vote once a day on different devices
When you scan it, it asks you to enter, you can either enter the sweepstakes or get a coupon (Instawin, but you know you are most likely going to get a coupon). You can vote on different devices. But only once a day.
3. What coupons can you get?
$5 off Megazord, $5 off Morpher and Buy Two, get one free coupons. You can also get them at Fury Diamond's blog and Razzle Dazzle Tumblr.
4. What can I win?
Apparently a voiceover stint, Deluxe Titanus, Deluxe Dragonzord, Deluxe Dragon Dagger or other Super Megaforce toys listed on the website. Grand prize includes... "round trip, coach-class air transportation for four (4) from a major airport near winner’s home (determined by Sponsor in its sole discretion) to LAX; three nights’ accommodations at a hotel determined by Sponsor in its sole discretion (single room, quad occupancy); ground transportation to and from destination airport and hotel; $500 spending money; and travel agent services."
5. How long does this last again?
Until December 31st, winners announced in January. Good Luck!
Posted by Lavender Ranger at 6:47 PM