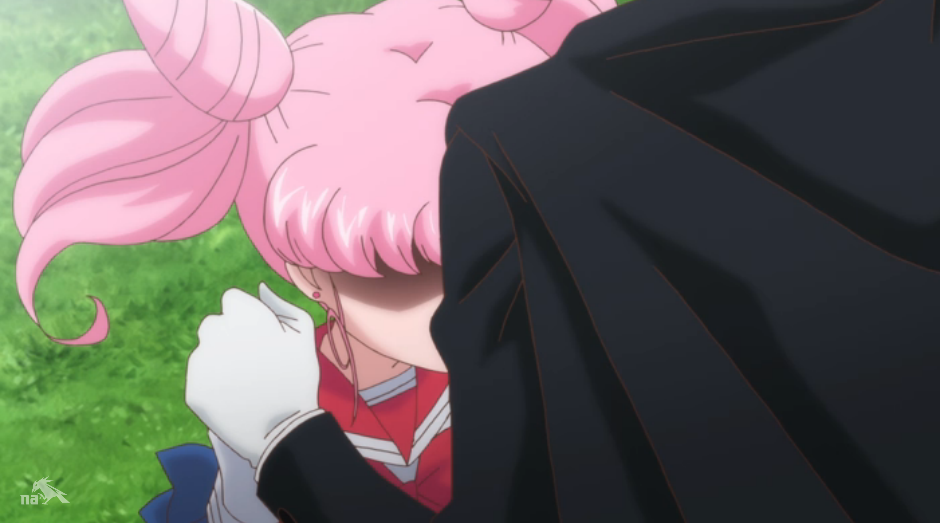 Episode Summary:
Chibi-Usa asks Sailor Moon to save the 30th century and shows her crystal. She explains her story, she swears its true, that there was a sudden explosion, that it was her fault her mom is gone. Artemis asks who attacked Crystal Tokyo and asks if the other Sailors are in the future. Chibi-Usa is not sure. Venus asks to go to the future. Chibi-Usa says she can't go to such a scary place anymore. Mamoru hugs her, he explains they want to help her, to take her time. She grabs him. Usagi tells Chibi-Usa to come home, Chibi-Usa wants to go to Mamoru's house. 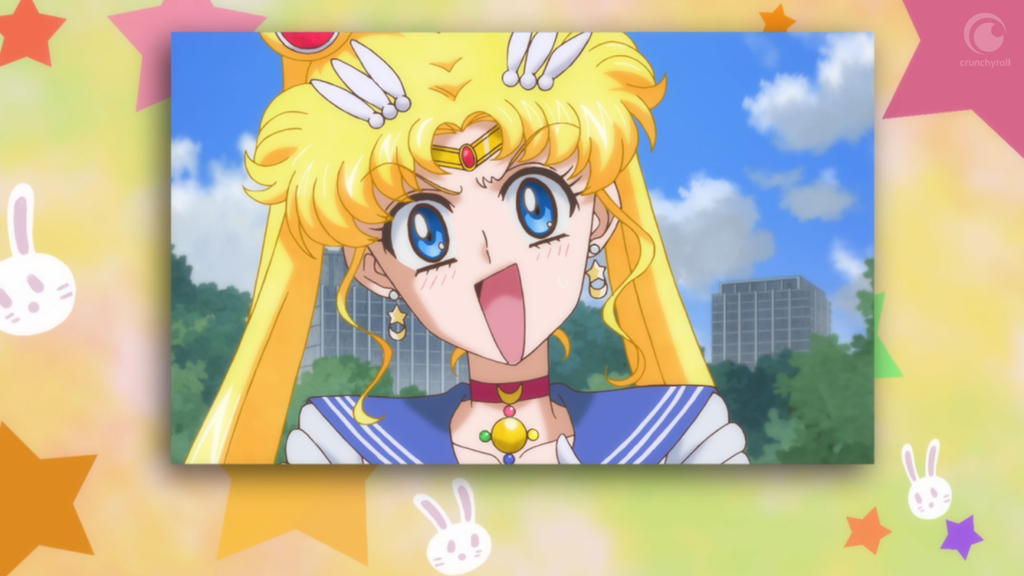 Later, Chibi-Usa is in a large shirt from Mamoru and sleeps in his bed. He asks about the future. She explains she came with Luna P. He goes out, where Usagi is and she asks if he finds Chibi-Usa pretty, saying Chibi-Usa loves him. She says despite her size, she is still a  girl, then she apologizes and admits CU makes her jealous. Usagi asks to stay longer. Mamoru grabs her and hugs her. They both say they want to protect each other. They kiss. 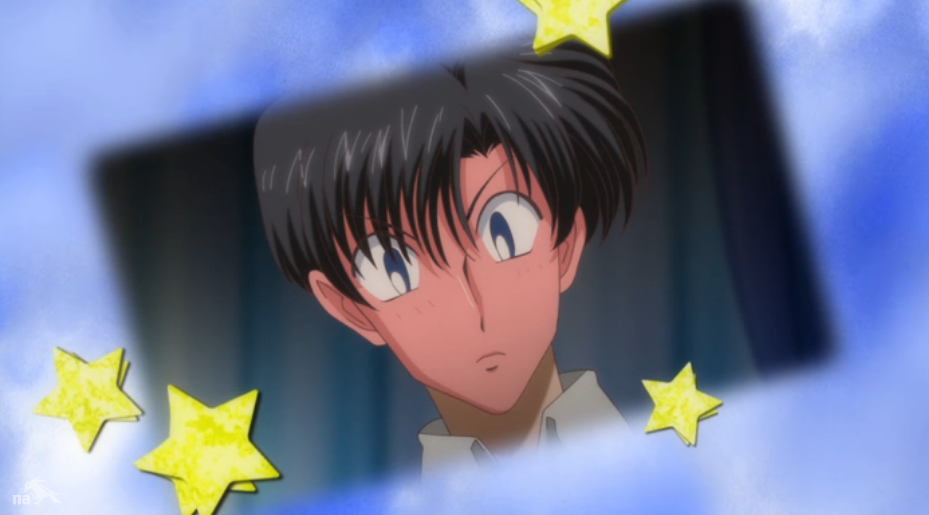 Elsewhere, Artemis wonders how Chibi-Usa was able to go through the time warp. He speaks to Luna, who is sleeping. Luna hears someone call her name, it was Queen Neo Serenity back in the Silver Millennium. Luna was in front of the Time Gate. She told her not to go beyond this point. She told her that a solitary guardian protected it and forget what she saw. Luna awakes. She thinks of the Legendary Time Key. The next day, Chibi-Usa awakes and thinks about what Mamoru said about running away. Usagi and Mamoru enters the room. Chibi-Usa says she wants to go to the 30th century and wants them to go with her. Later, she shows them and Sailor Venus and the cats the Time Key. She remembers Sailor Pluto saying it is forbidden. 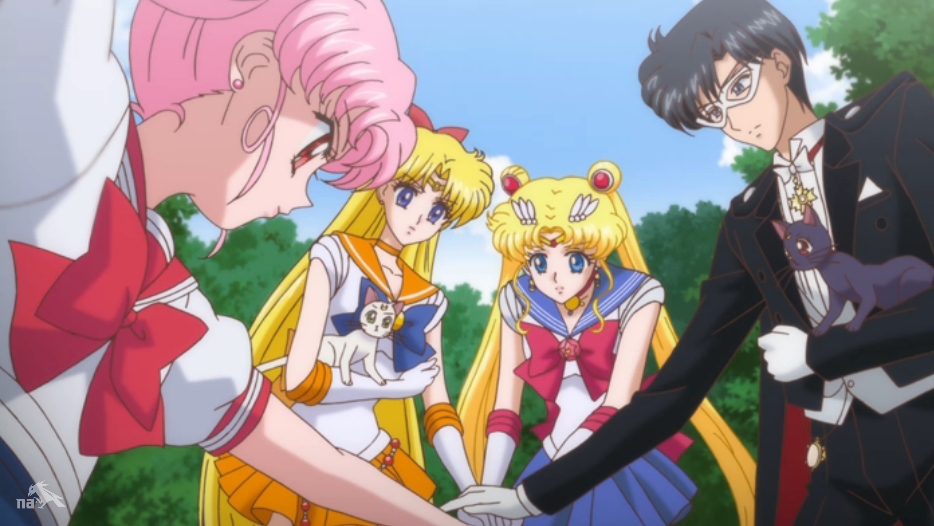 She tells them not to let go her hand. She recites the speech and the path opens. They are let go and split up. Meanwhile Prince Demande sees there are multiple energies going through the time warp and is called by Wiseman. Wiseman says to strike down the crystal. Esmerasude says she will fight them and sends two individuals to fight them (men?). The gang without Chibi-Usa are lost in fog, Luna says between times. Luna falls through a hole and Mamoru captures her. They spot the same Time Gate door Luna saw. Sailor Pluto steps in front of it, saying she can't let them through. She is Sailor Pluto, she will eliminate those who break the taboo of Space and Time! 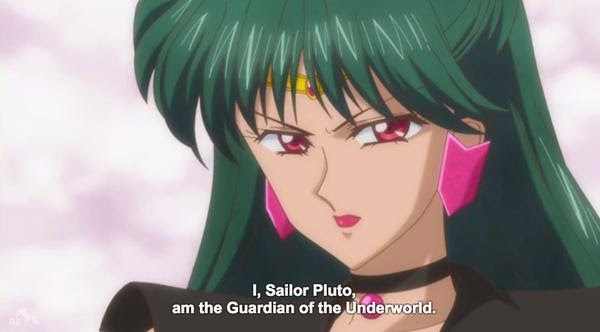 Usagi is shocked there is another Sailor Guardian. Sailor Pluto does the Dead Scream attack on them. Luna thinks to herself that they are not even allowed to know she exists, that the solitary Guardian of time that no one has ever seen. Pluto says they can't break the law. Her mission is to eliminate them. Chibi-Usa appears and screams not to kill them and hugs Pluto. Pluto lets go her staff. Chibi-Usa apologizes. Pluto asks where she's been. She explains she wanted Sailor Moon's crystal. Pluto says the crystal is unchanging, you can't use it. Pluto says Chibi-Moon stole the key without permission. Pluto hugs her instead. She says she's glad she's safe and calls her princess which shocks Usagi. Pluto apologizes for her rudeness. Chibi-Usa said she kept it quiet. Usagi asks about her parents. Pluto says they always been nothing but trouble for her. 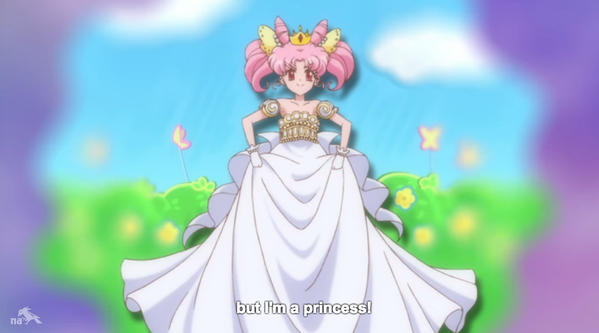 She opens the door for them and they walk through it. Usagi asks about Pluto, she says she can't move from there. The moon is close to the Earth, Crystal Tokyo is in ruins. They spot dead people and a ugly blue-black crystal. CU faints. They hear a voice saying not to go near the crystal. Chibi-Usa says there was a big explosion and that thing appeared. Everyone collapsed and eventually died. CU says to the crystal palace to find her mom. They enter the palace. The Boule Brothers Chiral and Achiral appear around them and laugh. They all placed in crystal. Moon does the Moon Princess Hilation but her wand doesn't activate. They are all stuck in the magnetic field. Esmeraude appears and says the palace will be destroyed. CU says her mom is in there. 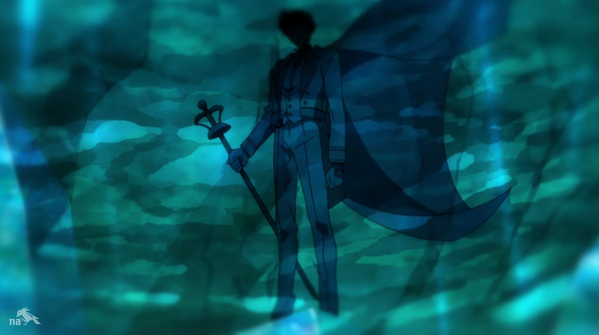 Esmeraude wants to see the crystal, she attacks them. They scream. The voice tells Mamoru to pray. Mamoru shouts and the crystal breaks. Venus does her Love-Me Chain and Tuxedo does his Smoking Bomber and it takes out the two brothers. Esmeraude retreats. Tuxedo thanks the voice (King Endymion). They spot the real castle and enter. They see the Queen in her crystal tomb. Chibi-Usa says her mom's name is Queen Neo-Serenity. Diana shows up and runs back to King Endymion who Sailor Moon thinks is Tuxedo Kamen. 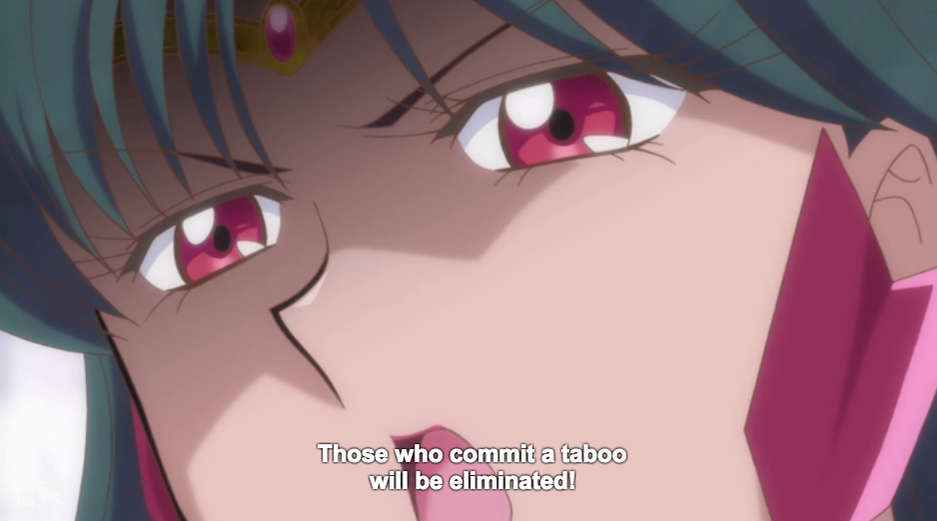 Episode Review:
Great Episode, some great flashbacks, character work and action. Thank god that King Endymion is not in that lame Lavender suit, this time it is white. I never heard of the boule Brothers, I guess they are from the manga. Esmeraude is like a walking Takeuchi drawing. I like that everything runs in a brisk pace, lots of information but it makes sense in its place. I recently saw the Sailor Moon R anime and what was seen in 5 episodes, played out in one here. Also like we got to see Diana earlier. The real star is Sailor Pluto. She is kick ass. 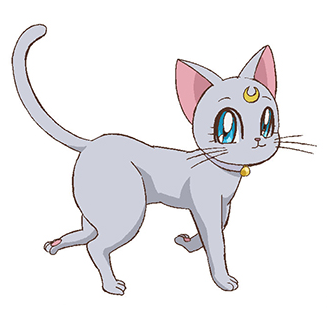