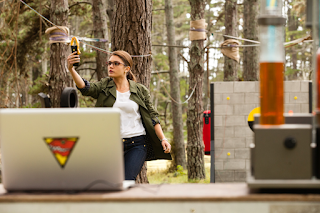 Episode Summary:
A new monster Gold Digger makes a blue guard explode. Sledge sends him down to Earth. Tyler is upside down and shirtless and the other rangers training outside in a forest. Chase as Black Ranger is using the Dino Armor X Charger with Kendall and creates a Deinosuchus drill on his arm and uses it to drill through a wall. He de-morphs. He broke some of Shelby's punching bags. He hear the N-Zed boys on Shelby's iPod who plays off going to the concert. Chase makes fun of her by singing the song. Back at the cafe, Shelby looks for Chase who is late. Chase comes in late. She wants to get tickets for N-Zed Boys. They are sold out and Shelby is mad. Tyler says Chase hurt her feelings. 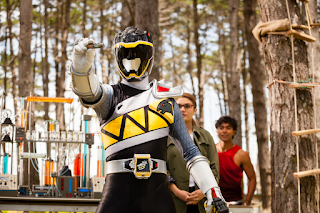 They are called to battle and Ivan is held back by a customer. Koda finds a shiny trail outside, they knock them out of his hands and they explode. The monster, Wrench, Poisandra and Curio arrive. The monster throws coins and they explode and the Rangers avoid it. The Rangers morph. Poisandra and Curio retreat. Red fights Wrench. Gold Ranger defends Red. The others fight Gold Digger. Coins explode around the four. Pink calls Dino Steel and is knocked down. Gold and Red fight Wrench and Gold falls. The others and Gold Digger arrive. Gold Digger makes stone slabs fall on them. Black calls his new charger and it backfires. Gold Digger makes a stone slab big and crushes Tyler, Shelby and Ivan who de-morph and are underground. The others run out of range.

Meanwhile, Kendall is fixing the Dino Charger, saying nothing is wrong with it. Chase says it is not his fault. Keeper says his heart to tied to the energem, if he isn't true to his heart, the charger won't work. Shelby is saying their air is almost gone. Kendall gives the others the new chargers. Black, Blue and Green face the monsters. Blue and Green try the Dino Armor X Charger in their morphers but it out of control and they fall back. Chase is called by Shelby, pleading for help. Chase thinks back to when he hurt Shelby's feelings. He apologizes to her. Shelby says its okay, he says its not. She seems to go unconcious. Green and Blue get thrown back by the villains. Chase uses the dino charger and creates the armor and knocks down the villians. He uses the sprial drill to go in and save the other three Rangers.

Black comes out with Shelby and de-morphs. They morph and do their roll call in a quarry. They fight the villains and Vivix. Black takes down Wrench with his armor. Red fights Gold Digger. Black breaks the monster's stone slab. Tyler calls the Dino Spike. Black does a dual-attack with it and destroy the monster. The monster grows big and The two megazords fight it. Gold Digger crushes the main one with stone. Pterazord lifts it out. Tri-Stego-Ptera formation is made and all six Rangers do the final strike, destroying Gold Digger once and for all. In Sledge's ship, Wrench tries hiding but it is futile. Sledge is mad he couldn't get three Energems. Sledge puts Wrench near a door that say "Danger" and it scares Wrench away. Shelby wins a contest to get tickets through the radio thanks to chase. Kendall tells them to take the night off. Chase apologizes to Shelby. Shelby says he is not as perfect as he thought he was. They leave.

Review:
Good Ep. Nothing much added to the overall arc.
Posted by Lavender Ranger at 12:30 PM