I couldn't use my own pictures because I dunno how to do that. 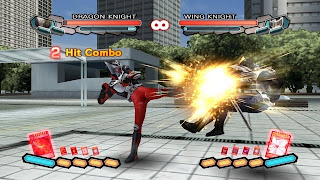 I don't play a lot of video games, the last console system I owned was Super Nintendo. Yes, aging myself. But I had to try this. I love Versus games, like Mortal Kombat, etc. So I had to check this out. Okay, there are multiple modes of play. If you pick 1 player, you can do Arcade, Versus, or Training. Arcade, you go against 5 or 4 opponents. In Versus, you pick who you want to fight. In Training, you pick your opponent--you can fight just a rag doll or modify them--have them fight back. You can put the second player in Versus and Training. Other than 1 player, there is multiplayer & Mirror World--which you got to pass with Wing to get his survive mode and same with Dragon. 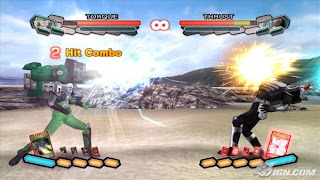 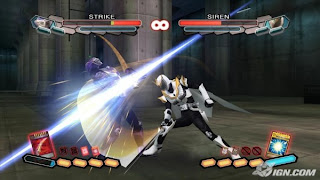 In Mirror World game mode, its confusing. You got a map you go through and have to complete tasks---you don't always have to defeat the foe, you sometimes have to implement Guard Vent. Even with the card, I had no way to know how to do this as the instruction manual is a generic one, with no real follow-through. And if you skip a task, you are punished with an 'accident' and fight a hard foe. And when you got to fight grunts, they don't really follow you, they do but slowly. The sound of them moving is annoying. And it was hard for me to maneuver. Three hits beats one grunts and if you lucky enough to use your contract beast at the right time you can wipe some out. Using the Wii, you got to shake the remote to use the cards. 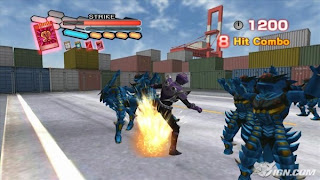 Those of you that wondered if the Ryuki game was used for this, and I believe it was, you can still hear the Ryuki theme song in the background, modified, albeit. You can tell with some characters that don't know when to turn around like Xaviax. Wrath always knows to turn around. Wrath and Xaviax always show up at the end of each Arcade mode and they are tough. Wrath teleports in and out. Xaviax has multiple hit points, can conjure up any of the Riders powers, beasts and weapons, but one per battle. His final vent is large and worth 13 hit points. To quickly avoid final vents, quickly press A. You gotta hurry up or its too late. Your final vent can also be avoided by your opponent (the computer) and then you are in trouble, the card is used up. 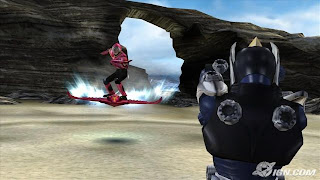 You also got to unlock the cards, you got to have enough rider points. Johnny Yong Bosch plays dragon Knight & Onyx. None of the actors from the show supply the voices. I haven't finished the game. There is a bit of overuse of the voices, same phrase repeated over an over when they fight (Strike says 'watch out' & Dragon says 'That was close', instead I put Lady Gaga in repeat while I play. In the scenes before the fights, they use catchphrases from the show (Kase says' For Ventara & Earth' & Strike says 'Semper Fi') but Incisor doesn't say 'This is so not cool.'

Each Character as foe or played:

Dragon Knight
I don't like playing him. Even though he has some advantages, its hard to fight with him. In Mirror World, he cant take out grunts as good as Wing. In battle, he isn't as strong. When you fight against him, its easy to beat him. He is close-up fighter and easy to avoid from long ranges. His primary function is kicking. He is in the same fighting field as Camo & Sting.

Wing Knight
Great with the sword, very easy to defeat grunts in Mirror World. His contract beast doesnt have much leverage for advent attacks in either Arcade or Mirror World, but great to use at the end. You also have to practice his Trick Vent card as you double yourself and have to use the cross key pad at the same time as the L control. As a foe, he can be wiped out better without a sword. Just stay away from his. When you wear his cape, it appears in other peoples Final Vents but not when he wins, it disappears.

Torque
Great to play in battle! OMG! He is a long-range fighter so stay away from your enemy and shoot. With his other cards, the cannons in those take time to charge and shoot. Always keep his Final Vent for the end because it really wipes out the enemy. As an enemy, keep close to him, avoid his shots with a guard and hit him close.

Incisor
It depends where you find him, in either Arcade or Mirror World, it is hard to fight him if in hard mode. He has his pincors, stay away--his shield also can hurt. His Final Vent is deadly. If you play as him, his advent attack is deadly at full force. I thought he would be a push-over but he isn't. He isn't that great against big boys like Wrath & Xaviax though.

Camo
It is a challenge to fight as him, he doesn't have much to him without his cards. He has great cards! His copy vent card is awesome, you actually become the foe for a short period, you can even use their cards if you dont have them. But you got to hurry up. As a foe, stay away from his feet but not so great from long distances--if you got a gun or sword, youre good. He can do this cool flip kick when you play as him. He is evenly matched with dragon.

Siren
I love fighting with her but its hard to fight Xaviax as her. Like Wing Knight, her sword is great. Ooh and when you get her other weapon through her card, it is killer if you leave for the end. As a foe, you can mop the floor with her. In hard mode, her attacks are multiple and can wipe you out quickly.

Strike
Strike is a great fighter, hard to beat as a foe and easy to win when you play him. He has some disadvantages but if you got most of his cards, he is useful. His final vent, like Torques, can wipe someone out. When fighting him, watch out, he not only has his beast but also the hybrid one and Thrusts weapon. Funny enough in the Mirror World, it has a summary saying he saw the power of Len & Kit & betrayed Xaviax.

Thrust
Thrust is brute force, fun to fight with. Hard to beat as he rams into you. He is easy to beat with a gun or to stay away from him. He can cheat, he can step on your foot.

Axe
He is also brute force, he is a worthy opponent, & agile. His claws are cool to use.
In Mirror World summary of Axe, it says after Spear was vented, he went against Xaviax.

Sting
Sting is hard to beat as an opponent. It takes time to learn how to play him and learn his moves. He is great in Mirror World though. His copy card can copy your foes weapon, not themselves like Camo can with his copy card.

Spear
I didn't want to play him but he is okay as a fighter. He uses his knees obviously. In hard, hes hard to beat. But in easy, hes easy to beat. He and Incisor are in the same fighting type.
In his Mirror World summary, it says he didnt like how Xaviax was doing things and betrayed him.

Dragon Knight Survive Mode
As a foe, he is easy to beat except for in hard of course. When you play Wrath in Arcade, he is usually the big boss or Onyx. When playing him, hes the same as regular one. You gotta play Strike in Mirror World to get Survives cards.

Wing Knight Survive Mode
As a foe, he is easy to beat. When playing him, hes fun & his final vent is interesting. You gotta play as Survive dragon in the Mirror World in order to obtain the cards of Wing Survive. Spoiler Alert, in the character summary when playing in the Mirror World, it says Kase was vented.

Wrath
Wrath is hard to beat, the hardest, next to Xaviax. He does that teleport thing he does on the show and is very tough and has lethal weapons. His final vent isn't that strong though, Strike & Torques vents are stronger. He is great to play! He is so strong and its fun to teleport---you jerk the L controls arrow left or right, whichever way you are facing, but be careful you might over do it. I tried teleporting backwards and it was fun. In Mirror World, he is effective, his beasts advent attacks are good on grunts. When I get to the Boss, the Boss is not Xaviax but dragon knight. When you win, it says Xaviax will rule the world and continue his endeavors.

Also, even though Vics last name was not mentioned on the show, the name Vic was in the end credits. But when you play him in Mirror World, he is called Vic Fraser in the beginning summary.

Onyx
Its Kit and he says other things than dragon. He doesnt kick, he does other variations. Fighting him is so-so and playing him so. Not so interesting since he has the same cards as dragon. I rather play with Eubulon, but that isn't an option.

Xaviax
Tough tough to fight. You cant play him obviously. When you fight him, he uses one of the Riders powers, including the Survive modes. He uses one at a time. Torque can beat him from long range. Xaviax just hits you and hits you, pummeling you, you loose lots of life fast. Best to use advent guards.

My first and last console is a PS1

I want to play this game!
A note, it isn't based on the Kamen Rider Ryuki game at all, it is a re-done version of Kamen Rider Climax Heroes, taking out the heisei riders and filling it with DK riders