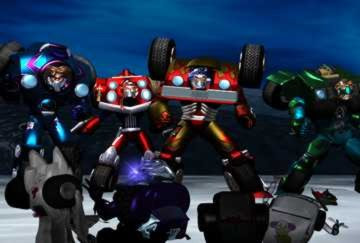 Van-Pires had 13 episodes on 1997 and 1998. I forgot about this show recently but I did know it and watch it. It was an utter travesty. Live-action mixed with low grade CGI. Four teens became robotic cars and fought against similar creatures that were a mix of vampires. The picture below said it was on Fox Kids but it wasn't, it aired syndicated. In my area of Miami, it aired on Sunday mornings, mostly ignored. t was produced by Abrahams/Gentile (New York), with CGI animation being produced under MSH (San Francisco). 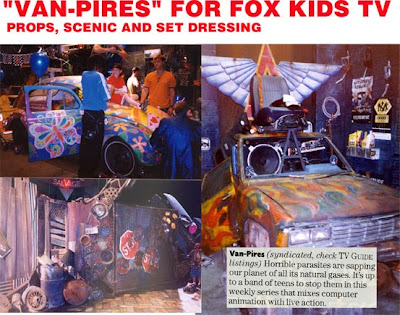 Van-Pires also had portions of its soundtrack written and performed by John Entwistle of the band The Who. The bad guys were the Van-Pires and the good guys were the Moto-Vators. I say it was a travesty because of the acting and the writing (especially when it came to the live-action portions). You can find this one online as well! 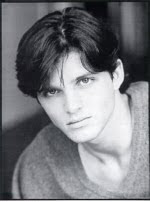 Jason Hayes played the leader in red Axle, he went on to play Jason Collins, one half of twins in Malibu, CA and was also on City Guys. He now is Co-Creator/Producer of I Eat Weird Inc. 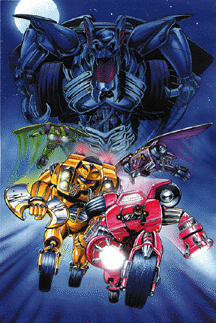 The Tail That Wags The Dog, And Other Tales From the 1997 American International Toy Fair
Toys were to come out from galoob but never did.
Related: American Tokusatsu during MMPR Hey-Day | http://henshingrid.blogspot.com/2009/02/van-pires.html
Posted by Lavender Ranger at 5:24 PM

Hi, Jason Hayes here. Thank you for the nod as you wrote this up. My wife and I have a production company called Kissing in a Tree and we have a film in festival rotation right now called Yogurt Girl. I also teach Theatre at James Monroe High School in North Hills, CA and I will be starring in a live, interactive, soap opening Oct. 13, 2012 at Opus in Orange, CA.
One of my students found your site. Thought I'd check it out. Van-Pires was great fun and feels a million miles away.
Peace,
Jason