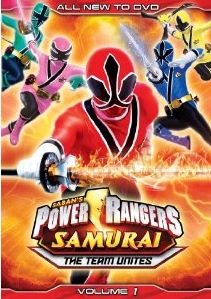 Power Rangers Samurai is the #1 kids action series across all television, consistently ranks #1 with boys, and is the #1 game on Nick.com, where visitors voted it2011’s Game of the Year. These DVDs join an extensive licensing program with more than 100 new licensees worldwide that include toys, video games, apparel, publishing, sporting goods, food, beverages and more.

POWER RANGERS SAMURAI: THE TEAM UNITES (Vol. 1) SYNOPSIS
Master Xandred, the evil Nighlok leader, has reawakened. And it’s up to Red Ranger Jayden and his Mentor Ji to form a new team of Samurai Rangers! Bound to duty by ancestry, Kevin, Mike, Emily and Mia join Jayden in his quest to abolish evil from the world. Soon, the teens must work together, with the help of their inherited symbol powers, to battle and defeat the menacing Nighlok monsters. Meanwhile, Xandred moves forward with his plan to cause the waters of the Sanzu River to rise with human tears and flood Earth. The Samurais must risk everything to keep their friends, family and civilization safe. Featuring non-stop energy, incredible transformations and the power of teamwork, these four adventures are filled with serious Samurai action! 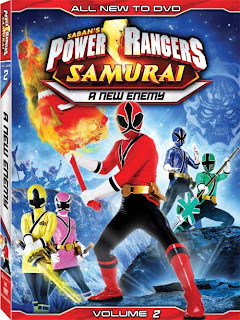 POWER RANGERS SAMURAI: A NEW ENEMY (Vol. 2) SYNOPSIS
A new threat lurks deep from the Netherworld and the future of mankind rests in the hands of the only team with the knowledge and powers to defeat them – Power Rangers Samurai! Jayden, Kevin, Mia, Mike, Emily and Antonio must battle Master Xandred’s menacing Nighlok monsters as they also learn to hone their powers and energies from Mentor Ji. Whether it’s saving civilians from physically crippling insults, mastering new Megazords and Beetle Cannons, the Rangers must do whatever it takes to bring down the Nighlok monsters. Unfortunately, a mysterious new enemy appears on the horizon, intent on battling Jayden. Who will prevail?


Lavender Ranger says:
Bloopers and Auditions sounds awesome! The 'Ranger Swarm' video is when there was various Rangers dancing at the International Licensing Expo last year (2011) and it is on the Power Rangers' YouTube channel.
Posted by Lavender Ranger at 12:00 AM