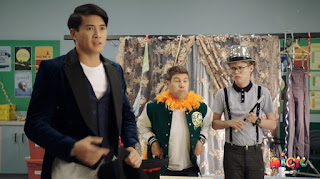 Preston is practicing in magic club. Vic and Monty come in, Vic wants to impress girls. Monty hypnotizes Vic into a chicken. A teacher comes in and is upset at a mess they made when a bee comes in. Preston accidentally puts the teacher to sleep and the principal comes in and she fires him. Little Tynamon is taken out of his Tynamon suit. He wants to be big. Odius tells him to bring Mick. She gives him a weapon. The Rangers practice a barrier. Preston comes in and is upset about the teacher firing. They come up with an idea to get him rehired. He overhears what the teens are trying to do. Preston tries with Principal but she says her decision is final. Tynamon follows Mick and zaps him. 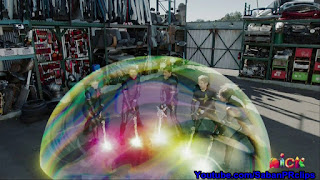 The Rangers fight Brax. They try the barrier but Brax laughs and fights Red within it. Brody de-morphs and the Rangers disable the barrier. The Rangers escape Brax. Redbot says Brody's star was damaged like when Foxatron did it. He tells them Mick is missing. Preston comes in. Calvin gives Preston an idea. Principal is making copies late, when Preston hid under the secetary's desk and puts her to sleep. Calvin messes up the copy machine. Hayley stops the fired teacher and Pink gives keys to Gold. Hayley leaves and the teacher finds the principal's keys and runs in the school. He finds the mess and the principal sleeping. He wakes her up and returns her keys. She thanks him. He helps clean up. She rehires him.  The Rangers fight without Brody (and the Lion armor). Tynamon and Odius talk about the deal. Tynamon and the Rangers fight. Blue uses the lion armor and Gold goes Superstar mode (poncho).

They do a dual attack and Tynamon is defeated but he reverses it. Hayley hits him in the face to reveal he is tiny. Brody arrives. Cosmo makes him giant. The Rangers call the zords. Fusionzord is formed. They call the Ultrazord and destroy Tynamon. Mr. Lunt talks to Preston and thanks him. He offers for a place for the magic club again. Everyone celebrates. Brody says chicken and Vic becomes a chicken again. They get a calla nd got o the base. They see Mick and he says he is going to visit his family as they are sick. Mick enters Odius' base and she convince him to make a satellite system for mind control. 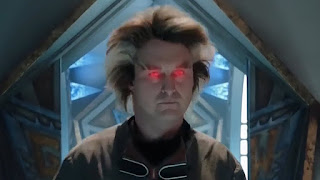 Episode Review:
Teacher is fired because of magic club so that's why it is called "Magic Misfire." ha. I am a teacher and yes, we don't sleep in class but I did know a teacher who 'rest his eyes' in the teacher's lounge which is allowed. What the Rangers did was a little extreme and I hope kids don't try to imitate something similar (of course without ninja skills).
Posted by Lavender Ranger at 6:26 PM