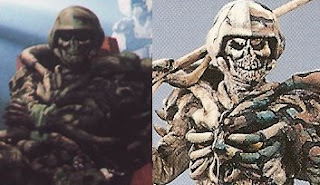 Rito Repulso / Gasha Skull
Gasha takes on the guise of Young Noble Junior, a bleached blonde leather punk with a guitar. He was killed mid-way in the series. Rito was incorporated into the Rita mythology as Rita and Zedd were still the head villains. Rito was Rita's obnoxious brother who hilariously called Zedd 'ed.' He became more of comic relief, along with Goldar. He was presumed to be destroyed but never seen again. 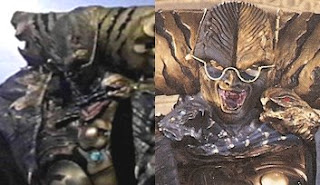 Master Vile / Daimaou
Daimaou, like Master Vile is Rito/Gasha Skull's father. Gasha had to revive his father, while Vile just arrived to Rita/Zedd's palace. They were both evil and serious, only difference Daimaou actually sacrificed his son. Both had no mention of a mother. Daimaou was ultimately sealed by the Kakuranger, while Master Vile went back home and was received Rita and her clan at his home when Machine Empire attacked. He was destroyed by Zordon's wave by the end of Power Rangers in Space.
Posted by Lavender Ranger at 6:01 PM