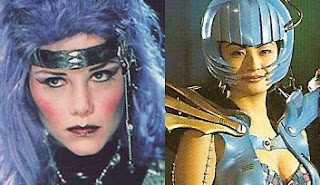 Astronema / Shibolena
Shibolena was a robot created in the image of the daughter of Dr. Hinelar, one of the baddies, but he was not transferred into Power Rangers. Astronema was the villianess, formerly Karone--the sister of Andros. Astronema was lied to her whole life, I guess Shibolena too a bit. Shibolena was killed near the finale by MegaRed while protecting Yugande. Astronema came around to Andros, but was brainwashed to be evil, and eventually became good once again.

Dark Specter / Javious the First
Dark Specter got together all the baddies from the past seasons and looked like Divatox's fiance. Javious the First was a mysterious main villain that was rarely seen. Javious was connected to the Nejiranger (Psycho Rangers) without him knowing and when they were destroyed by the Megaranger, it killed him. The Pyscho Rangers were connected to him but it didn't kill him. He was destroyed when one of his minions-Darkonda struck into him. 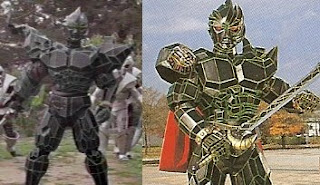 Ecliptor / Yugande
Yugande and Ecliptor cared much about their female charges. Yugande was destroyed for many times and one last time when he was in his red form Super Yugande. He didn't questioned Hinelar. Ecliptor did redeem himself, caring for Astronema but was turned evil and destroyed by Zordon's wave. 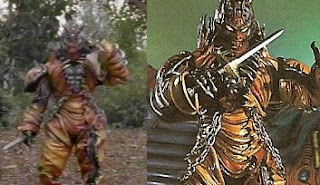 Darkonda/Guirali
Darkonda and Guirali were both self-centered and didn't stop to nothing to get their way. They were wicked and cruel. He kidnapped Karone when she was a child. He had multiple lives but had one last one, which he used to destroy Dark Specter. Guirali sing children as human shields to prevent the Megarangers from fighting back. He was destroyed mid-way through the series by the Megaranger.
Posted by Lavender Ranger at 8:34 PM

Just to note: I believe that Astronema has some similarities to Dr Hinelar does she not?