Instead of goofy space invaders, we get space pirates in a subcraft that spent most of the time under the water on the Earth. 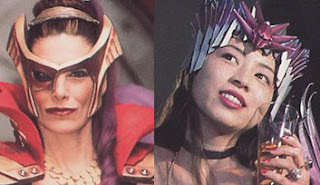 Divatox/Zonnette
Zonnette showed too much boobage (cleavage) so Saban decided not to use much of the footage and film their own footage for the baddies--thank god they enough money to do. Divatox first premiered in the movie Turbo: A Power Rangers Movie. She wanted to marry a lava-monster, then just set off bombs on the Earth and destroy the Rangers. She was wicked, fretted a lot, loved a good joke and was sarcastic. Zonnette was sexy, flirty and had a crush on Red Racer. She also had a sister and then turned into a good princess who had to marry. Divatox was hinted to be the twin sister of Dimitria, Zordon's replacement and was turned good by Power Rangers in Space. 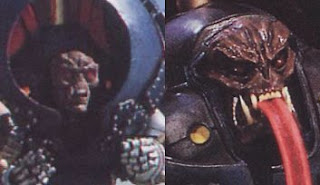 Rygog / Gynamo
Gynamo was the leader of the baddies, he could quickly get flustered and was dense. He also scrambled for ideas but sometimes he was strong. Rygog was just second-in-command, followed what Divatox told him to do. Gnamo went on to open his own restaurant. 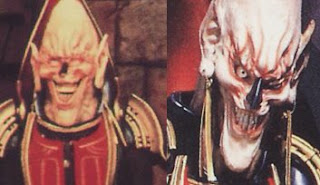 Elgar / Zelmoda
As you can tell, Zelmoda had a much more creepy face. we would occasionally see this face in the footage but not much as the one to the left. Elgar was obnoxious and had a big sense of humor, he was Divatox's nephew, he was responsible for turning Bulk and Skull into monkeys. he for some reason, re-appeared in Power Rangers in Space, where he was destroyed by Zedd's wave. Zelmoda was less annoying but he was just as dense, he was also cruel. He went on to go to elementary school. 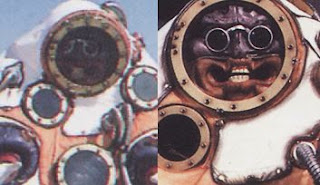 Porto / Grotch
Porto did not appear in the movie but did for the rest of the series, he was like Finster, in that he invented stuff and sent monsters. Grotch once grew big but shrank back to regular size. Porto and Grotch were both scaredy cats but Porto just stayed in the sidelines, while Grotch was a bit more wicked. Grotch went on to attend elementary school. 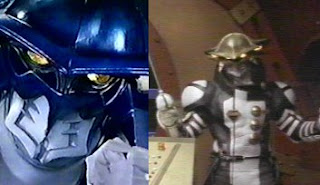 Ritchihiker/RitchRitchihiker / General Havoc
Ritchihiker was hired by Gynamo to destroy Carrangers and was struck by lightning, he gained this gold form. He kicked out Gynamo and Zonette and assumed command of the Bowzock. He was destroyed in a robot he created that the Carranger destroyed. General Havoc on the other hand was Divatox's brother, and also captured their Megazord, and used it against the Rangers, powered by the Phantom Ranger's ruby. In Power Rangers in Space, where he was destroyed by Zedd's wave.

Exhaus/Exhaus Super-Strong / Goldgoyle
Exhaus was the big boss of the baddies. He used them and was cruel. His Super-strong from above was used as a monster called Goldgoyle in Turbo.

Posted by Lavender Ranger at 7:43 PM