The villains of Gingaman were pirates, who take over the land of the Gingaman. They are all together, while the villains of "Lost Galaxy" were separate. Trakeena, Treacheron, Villamax, Kegler, and Deviot for sometime were part of Scorpius' army. Scorpius was an American-made villain, no relation tot he source. While Captain Mutiny, Barbarax, and Hexuba were pirates together, footage was used. 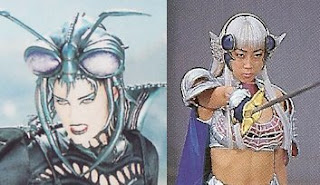 Trakeena / Shelinda
Well, Shelinda's outfit was way too revealing for Saban to use, so they made a whole new outfit for Trakeena, bug-inspired and she got much more buggy as the series continued. Trakeena was the princess daughter of Scorpius, the American-made villain. She didn't want to go into a cocoon he wanted her to go in but later did so and came back in the next season---Lightspeed Rescue, wanting to be 'green' again. When her father was destroyed, she blamed the Red Ranger. Shelinda had a vendetta against Ginga Green, she was not above using her sexiness. She had a relationship with Budou and doubled crossed Captain Zahab. 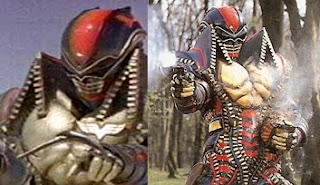 Villamax / Sanbasshu
Trakeena met Villamax at the Onyx Tavern, he saved her from being attacked by a few patrons. He then trained her to become a powerful and skilled warrior, worthy of being her father's successor. Villamax is an honorable warrior who keeps his word, and loyally serves and protects his princess. When Trakeena absorbed Deviot, she was changed, and Villamax was destroyed when he defied her. Sanbasshu was much different, a run-of-the-mill villain, he grew huge and was destroyed by the Gingaman. He was part of Captain Zahab's gang. 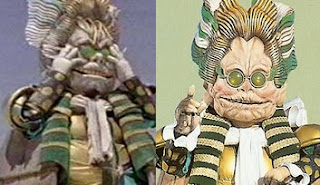 Kegler / Pukuratesu
Pukuratesu loved Iriesu (Hexuba) and he helped her arrange Budou (Treacheron)'s death. When she died and he began to go mad. He barely escaped with his own life, and hatched a plot to destroy Captain Zaihabu, eventually he stole Gotaurus to force Hyuuga to work for him. Kegler was Villamax's old and worry-wort waddling sidekick. He was last known to be on the Scorpion Stinger when it crashed on one of Mirinoi's moons. 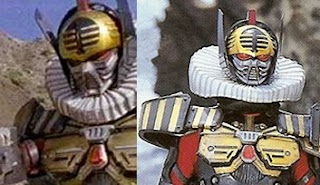 Deviot / Prince Bezunera
Deviot is a power hungry traitor, who serves only his own needs. He offered his services as Scorpius' general, but used the position to set up Scorpius' death and try to take the power of his cocoon. When Trakeena returned, he served under her, and unsuccessfully tried to get her killed. When Deviot recited a chant from a powerful book, he transported everyone into the Lost Galaxy, where he hooked up with Captain Mutiny and his crew. The power of the Galaxy Book deformed Deviot, but he regained his looks by draining a monster's power. Upon returning to the Scorpion Stinger, he merged with Trakeena by forcing her with him into the coccoon.

Prince Brazunera brought with him three starbeasts he had enslaved and mechanized. He had to return payment to Captain Zahab when the Starbeasts went back to Gingaman's side. He hired as consultant by Battobasu (Barbarax). He ended up falling into a vat in a struggle with Gingaman and mutating into a monster form and was killed. 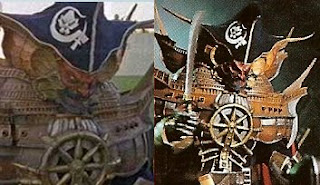 The other characters were basically the same, or not much to say. For those fans, Scorpius was American-made and Furio was from Megaranger.

Interestingly, it seems the Villamax costume was lost early on, which is why that unused Megaranger costume was used for Furio. Furio is basically Sanbash, and was *going* to look like him but they lost the suit. So when they got it, it was used by Villamax, a new character that, in terms of role in the story, has no Ginga analog.

Uh... I read it somewhere. A long time ago. But you can see that Furio basically has Sanbash's job.

Personally, I liked that Furio was Sanbash's equivalent!