I am comparing how the good guy characters were converted from the original Japanese source for American audiences. I will do Jungle Fury/Gekiranger some other time. 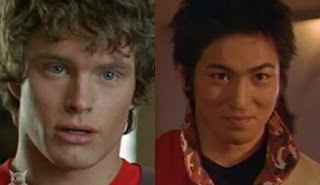 Mack Hartford / Satoru Akashi (Bouken Red)
Akashi was a refreshment for many fans tired of reckless and obnoxious leaders, he was stable, resourceful, smart and dependable. He genuinely cared about his teammates. He was a great legendary adventurer and was all torn up about his loosing two former teammates (buried alive in a cave). To his teammates, he was a fuddy-duddy. He was okay with poking fun at himself. He took consideration of his other teammate's feelings and always knew things before them and always followed what their bosses wanted. Mack is a different story, albeit brave and caring. He was also a rich boy who aspired to be an adventurer like his father, but little did he know he was an android with memories implanted him. He went against his father's wishes. By the end, of course, he was turned into a 'real boy' like fans already figured out. 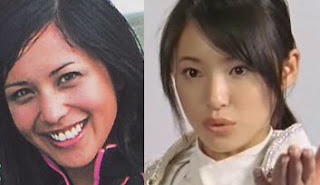 Rose Ortiz / Sakura Nishibori (Bouken Pink)
Sakura was considered to be cold and up-tight, she was forced to be so for images purposes for her rich family to so no emotion. She joined a special forces troop to escape. She searched for her treasure... her smile. In truthfulness, she was quite shy amongst her true love Akashi and never told him (in the series anyway). Rose is a Mensa-level egg head who expects everyone to know what she knows and is just as up-tight. She never had fun a day of her life. 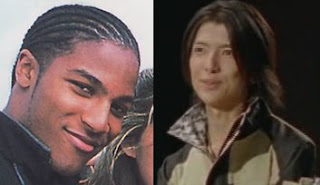 Will Anton / Masumi Inou (Bouken Black)
Masumi is a rash 'play by my own rules,' 'too cool for school' kind of guy, he wanted to usurp Akashi as the best adventurer. Masumi's heart came for Natsuki, he felt sorry for her at first but really cared for her and couldn't imagine going on without her. Eventually he learned to be a team player and team leader. He didn't want to admit it either, but he needed Akashi too, to compete with. Will was a extremely extremely watered down version of Masumi, he didn't want to be a team player either, but rather quickly changed. He was used to working on his own. He is a master thief. Will once 'switched sides' and went against the Rangers, but it was all a plan by their boss Andrew Hartford. 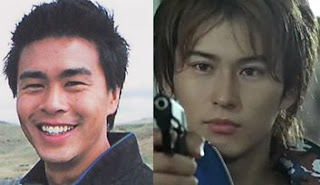 Dax Lo / Shouta Mogami (Bouken Blue)
Shouta is a sly ex-spy that constantly finds things funny and always chasing women, well he is very gentleman-like with them. He never lets anything bug him. He can find himself out of any situation. Dax on the other hand, got involved and tricked a villain, spending all his time with her and then betrayed. Dax was a stunt man who aspired to be a real actor. He was the comic relief but sometimes quite dumb. 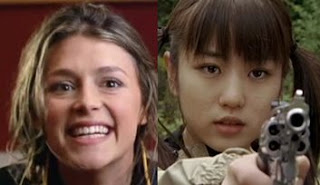 Veronica "Ronny" Robinson / Natsuki Mamiya (Bouken Yellow)
Natsuki is the most popular character in the series, child-like cheery bubbly and always in a good mood. Other than in being very curious, Natsuki sought her past, because she doesn't remember anything before Masumi saved her. Turned out she is the last survivor of an ancient civilization that was essential to the series. She decided it didn't matter who she was before, but who she is now and continue being happy and having adventures. Ronny is child-like too, but the bad kind, selfish, self-involved, ignorant and jittery. She is a race car driver champion. 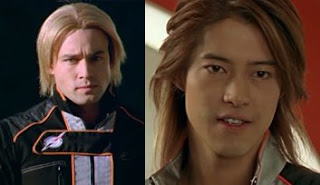 Tyzonn (Mercury Ranger) / Eiji Takaoka (Bouken Silver)
Eiji has a very complicated life. His father was a demon hunter and his mother was a demon. They are both dead, he continued hunting demons, but one of the demon wanted him dead so his mother could leave a purgatory-like place. He resented his mother but eventually learned to accept her as she watched over him and guided him. Eiji was a traveling monk who ate vegetables raw, he eventually learned not only chase the demons but be part of the team.

Tyzonn was very different in that he was an alien from a planet where his people could turn into mercury. His story was a mesh of three different characters, some from Akashi (his former team mates were buried in a cave as well), he was turned into a lizard-like creature (like one of the episode characters), and a bit from Eiji. Tyzonn was weary of joining another team. His fiance was lost in the cave, so he thought. An enemy pretended to be her and he vanished the enemy but later was reunited with his lady love. 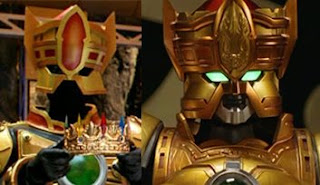 Sentinel Knight/Zuuban
Zuuban was a legendary sword that could turn into a warrior that only could say his name. He would turn aggressive when everyone was sad or angry. He would only work properly when everyone was happy. He was basically like a pet, did the gang's dirty work. Sentinel Knight on the other hand was the guardian of the Corona Aurora, a crown of power the Rangers were racing to complete before the baddies did. S.K. had the power to restore 0ther ranger's powers. He got Zuuban's form, when a magical sword was retrieved. He got his true form back at the end when the crown was restored.
Posted by Lavender Ranger at 10:51 AM

The sentinel knight was also used for combining with the Red overdrive ranger to form the battlizer mode...you forgot that...^^

Wow, you make Ronny sound like such a horrible person, a mean and selfish brat. Which is... just... uh, is there some *other* show with another character called Ronny who's nothing like PROO's Ronny and you had the wrong channel that day? No, really.

Of course, Bruce Kalish has proven that he hates focus episodes and prefers "act like you're nuts for an episode as everyone *else* pretends you were that way all along and then 'learn your lesson'" episodes so I *guess* it would be possible for a person to see Ronny that way... if the first fifteen minutes of "At All Costs" was their only exposure to the character EVER. And it's not like you describe the others based on their Kalish On Crack episodes (nothing about Ty being a fawning fanboy, Will being Mr. Teamwork, etc.)

Ronny's not even a favorite character of mine. Just that it's kind of jarring to see a description that's this far off from a character's portrayal.

Thank you for the critique. I am not being sarcastic. It is true, I didn't notice I did that. I think what happen is that I had already mentioned Tyzonn's fanboyish and other factors of the non characterization of Ronny before in other posts, that I summed it up without backing it up with facts.

I myself wish that Tyzonn could have adopted an Earthen surname like Merrick of Wild Force did. I like how Tyzonn Silvers sounds.

Also for Dax: While not as great as Souta, Dax did start to get a little more heroic and resourceful later on.(Case in point: The final battle with the Fearcats when Benglo fired on them and Dax used the Defender Vest to take the blast.)

As for Ronny, I liked that in the finale she learned nothing at all!