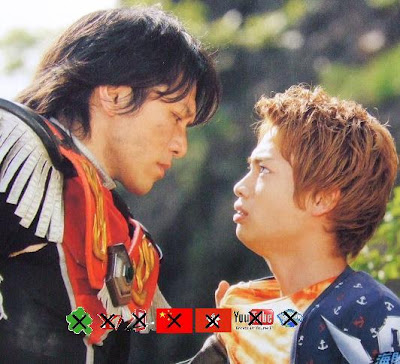 Episode 20: Mayoi no Mori (Forest of Indecision)
Airs: 7/10/11
Navi's Otakara Navigate tells the Gokaiger "It is necessary to meet with the Warriors of the Hidden Forest." It is discovered the treasure is the "Armor of Gingaman". Knowing this, the 6 Gokaiger head to the Ginga Forest. However, Gingaman's previous enemies were the Space Pirates Balban. Given Gokaiger's Space Spirate-status, the two teams are anything but compatible. Hyuuga asks Gai for his GokaiCellular. He wishes to fight using the armor. Basco aims set on the Great Power of Gingaman and summons 4 of the Hidden Ranger Keys he has in his possesion- Wolzard Fire, KuroKishi, DekaMaster and MagiMother! These Super-Powerful Warriors become the enemy, and the Gokaiger seem to have fallen into a big pinch!
Basco will also summon his monster, the Moondroid Tsukki.


Episode 21: Boukensha no Kokoro (Heart of an Adventurer)
Airs: 7/17/11
Akashi, former BoukenRed of Boukenger, suddenly shows up on GokaiGalleon. He requests that the Pirates help him go after a Precious, the "Yomi no Shinzou" (Heart of Hades.) However, Zangyack and the remainders of the Jaryuu tribe were also after the Precious. Then, Ryuuon of the Jaryuu tribe is revived by the Heart's power!


Episode 22: Hoshi Furu no Yakusoku (The Promise of the Star Shower)
Airs: 7/24/11
Out shopping, Joe and Gai encounter a bicycle-riding boy. This boy had made a promise to his friend that he would reach a far off mountain. At this far-off place, he encountered Action Commander, "Starguru" and got hurt, unable to fulfill his promise. What is Zangyack's plan, and what can Joe and Gai do to help?

Episode 23: Hito no Inochi wa Chikyuu no Mirai (People's Lives are Earth's Future)
Airs: 7/31/11
Navi's Otakara Navigate tells the Gokaiger that "Kindness will lead to a meeting". Luka and Aihm arrive in a park where they meet Miku-chan, and her mother. Her mother is about to give birth to a baby. At that moment, Zangyack appears. Knowing that they need to get Miku and her mother to a hospital, Luka and Aihm fight off the Zangyack and try and get them to the hospital. Luka and Aihm meet the paramedic, Tatsumi Matsuri, the former GoPink of GoGoV. In front of this veteran woman soldier, Luka and Aihm try and impress! Basco's monster, Firedroid Meran, appears!

Episode 24: Tsunagi au Te no Te (Tied Together Hand in Hand)
Airs: 8/7/11
Action Commander, Waakarere appears.
August7 is Lavender Ranger's birthday. No summary yet but it seems it will be a character-driven episode, possibly Silver + someone.

Episode 25: Oohisa! Arashi wo Yobu Dousoukai (It's been a while! The Class Reunion the Storm Called)
Airs: 8/14/11
When the Gokaiger are facing an enemy which is evading all their attacks, all hope seems lost. Then, a certain easily excitable, Red Digital Warrior appears! Action Commander, Yugamiino and Elecroid Dobiriri appear as villains.
Could be MegaRed.

http://blog.tvasobi.jp/entries/index/go-kai/
It looks like Gai will recieve the Go-On Wings key in Episode 19 this Sunday July 3rd.

Posted by Lavender Ranger at 8:40 AM

Knew the Gingaman would not be to keen on the Gokaigers. Also, I think it is good episode for Basco to unleash KuroKishi.

From the title, it sounds like 22 might be a Luka-centric episode, given how she watches for shooting stars to keep her eyesight keen.

episode 23 sounds like the girl power episode since it's focused on the girls and features a veteren girl/pink ranger instead of a veteren red.

The Boukenger and GogoV episodes sound like good ones. Can't wait, especially with two back to back tribute episodes. I, too, applaud the use of a non-Red warrior and the focus not being on Don for once (I love him, but the others need some love too). Great month coming up.

I don't know why I really really want is a Pink Final Wave, Green Final Wave, Yellow Final Wave and yes, even a Red Final Wave. Also, all 5 transforming into Pink, Green, Blue and Yellow.