www.rangerstop.com
This weekend I've been so busy that I forgot to tell you guys is that I was going to be at the event. Anyway, I met some fellow fans that know about Henshin Grid so that was great. I live in Miami and traveled to Orlando for this quaint toy and comic con and it was fantastic. I sold toys, cards, pinatas and other things so thank you to those who bought. I do not know yet if I will do another con this year but I am thinking about doing Rangerstop next year or at least just attend. 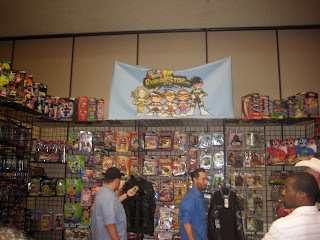 At the con was Jason Faunt (Wes), Nakia Burrise (Tanya), Jason Narvy (Spike), Steven Skyler (Antonio), Alex Heartman (Jayden) and Najee De Tiege (Kevin). Najee was super kind to purchase from me. It was great fun. They had a over 18 panel like at PMC3 and heard new info from Narvy and great stories from Samurai. Anyways Rangerstop.com is a toy website, soon they will have an online store set up. So give it a glance. 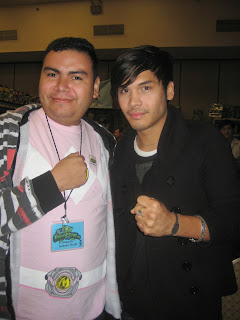 Steven Skyler and I
At the 18 and Over Panel, I asked him what was up with his Spanglish with the American accent. He told me they told him to speak with American accent. 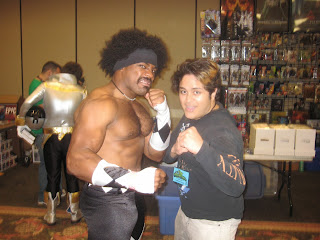 My friend Peter (or Pedro Castle, ha ha) with WWE Wrestler Xavier Woods (Austin Watson) or Consequences Creed, who is a Power Rangers fan and just happened to be at the con.
Posted by Lavender Ranger at 7:34 PM