Lighting Morpher
Red re-color of the basic morpher. PR only. This is the name for the toy.

Triassic Morpher
Re-colored and re-modeled form of the basic morpher for the Battlizer. Power Rangers only.

SP-License of Deka Swan and Gold / 'Kat Morpher'
Re-paints of the Delta Morpher, the black parts were repainted white and the white letters were re-painted, one orange and another red. Funny enough, Deka Gold's morpher went to Kat Ranger instead of Deka Swan's. I found it interesting. Neither got names on the show, these are fan names.

'Bright Throttle'/'Nova Morpher'
Gold re-paint of the Omega Morpher for Deka Bright/Nova Ranger. Neither were named on the show, these are just fan names.

Battlized Morpher
Re-paint of the Omega Morpher. It wasn't exclusively seen when the Battlizer was used for Magiranger vs. Dekaranger.

Mother Phone and Fire Wolzaphone
Re-paints of the basic MagiPhones. MotherPhone didn't appear in Mystic Morpher but the red one did but with no name. 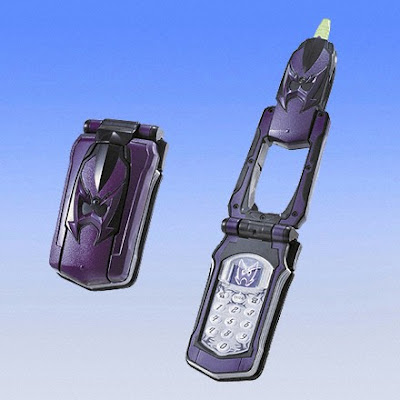 WolzaPhone / 'Dark Morpher'
Purple re-paint of the MagiPhone with a W remodel. In Mystic Force, it wasn't named on the show.

Fierce Dragon Morpher
Re-paint and addition to the Solar Cell Morpher, Power Rangers only. This is the name for the toy.

Sentinel Morpher
Re-paint of the Mercury Morpher, Power Rangers only. This is the name for the toy.

Posted by Lavender Ranger at 8:02 PM