This is the January issue of SFX Magazine, which I have read in the past. No Pink Spandex covered this earlier but I just noticed now. They complained about Goldar and Snizard, but what I find alarming about the article is that they call the original yellow ranger 'technically a transsexual' which is very incorrect and a common misconception of transsexuals. If they want to really comment on the yellow ranger having no skirt and once being male, they got it wrong. Saban and company just change the genders, that's it. Trini is female, that's it.

I hate to get all preachy but I think it is an important point to bring up, as it is apparently still taboo in mainstream culture. Intersex is still called hermaphrodite and transgender is still incorrectly called transsexual. My Firefox browser spell check doesn't have any of these terms in their dictionary. Anyhoo, enjoy the article. 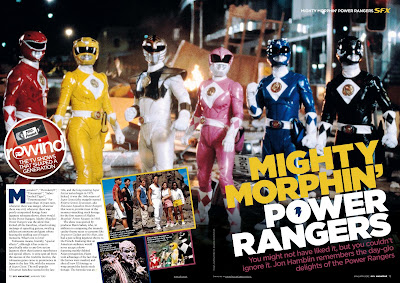 The story was provided to No Pink Spandex by SnoopsWarner via Rangerboard. 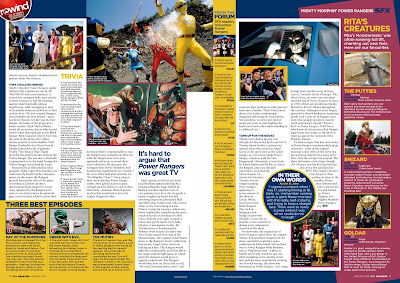 See here is my issue with all this. The American Yellow Ranger is neither transexual, transvestite, intersex or a crossdresser. Had this been written properly, they would have learned that they made the change for the American audience from male to female because yellow is perceived as more of a 'feminine' color. Though as my Advanced Exposition professor would yell if he heard anyone talking about color and gender "Colors do not have genders! People put genders on colors!"
Unfortunately it is articles like this, that are misinformed regarding a character and why a character is different then in stock footage that makes parents freak out.

I agree with your professor Jonathan, colors don't have genders. You can check that out on my post about Kamen Rider Decade being pink.