MagiDragon
Basic changes are that it is completely red instead of multi-colored and it has rainbow color on the wings and the Gokaiger symbol on the head. But it is basically the same shape except for the tail.

PatStriker
Basically same design but the red was a bit darker and it is a bit wider, with rainbow color and gold part with Gokai symbol on top.

GaoLion
The shoulder cannons are longer, the shoulders don't have the line designs and are overlap the bottom leg, the feet are more out and the back legs have cannons and grey things on the butt. The mane is different. 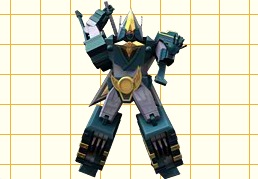 Furai Maru
Complete change,t eh crescent moon went from the chest to the belt and smaller, the blue color changed into white. The red knee caps became smaller and the fist legs became more complex. The silver helmet became gold and he gained a weapon. 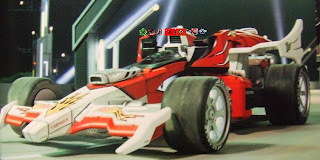 Speedor and Machalon
Machalon is Speedor's son and more suped-up and longer, the only thing I see in common are the tires (sort of), the color and the eyes (sort of) and the silver exhaust-thingy on the front. I admit i don't know much about cars so I don't know the name of stuff.

I left the more subjective one last, and as for Shinkenger, it is just the Origami is stuck out of the GaoLion, so I'm not comparing it. I say subjective about the Goujyujin because it's not exactly the same.

I think the Goujyu Drill is suppose to look like Jet Gamma because it is Timeranger but to me, it looks more like the LifeBird of GoGoV.

Goujyu Rex looks more like the Tyrannosaurus to me than Dragon Caesar. Everyone says this too.

Goujyujin looks like a reverse mirror AbarenOh on steroids and has some elements from past robos. 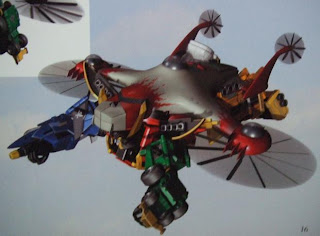 The Variblune from Goranger appeared in the 199 heroes movie and made GorenGokaioh.

It looks very much the same, just darker and in CGI.
Posted by Lavender Ranger at 10:38 PM

Pirate's version...as I would said hehe...plus it suit the concept right; because pirated SHF also dun have the actual colour etc ><..