Planets in the Power Rangers Universe

I wanted to do this post for a while, I thought it would be fun to make a list of all the important (more or less) planets in the Power Rangers universe. There are many minor planets mentioned once or twice, but here are some that major or recurring characters came from.

Eltar
Eltar is Zordon's homeplanet. Upon his release from the inter-dimensional timewarp that Rita Repulsa put him in in the Turbo season, he returned to Eltar with Alpha 5. The Phantom Ranger was also said to be from Eltar by Divatox, though the Phantom is shown to reside on his own planet in "In Space". A war occured on Eltar and Zordon & Alpha 5 had built robotic clones of the 2nd team of Turbo Rangers to help in the war. Dimitria and Blue Centurion traveled to Eltar to help out. The planet was conquered by the United Alliance of Evil and Zordon was captured by the Turbo finale. The name Eltar was first mentioned in Mighty Morphin Power Rangers: The Movie, it is the only canon info from the movie to the show other than the Ninja Zord names. Origin of name is unknown. 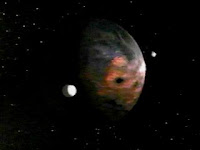 Phaedos
Only appears in Mighty Morphin Power Rangers: The Movie; it is home of the Great Power which Dulcea protects. Dulcea took the Rangers to the ruins of the Ninjetti Temple. The Great Power came from the Monolith. Origin of name is unknown. 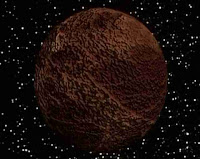 Edenoi
Edenoi was the home of Dex the Masked Rider, and also the planet where King Lexian built Alpha 5. It was only referenced in the three parter in MMPR. It was exclusively mentioned in Saban's Masked Rider. Origin of name is unknown. 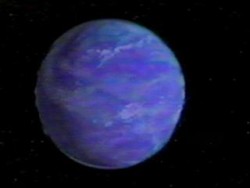 Aquitar
It was first seen during Mighty Morphin Alien Rangers, at the end of the third season in which five Aquitians Rangers come to Earth to temporarily take the place of the incapacitated Earth Rangers. Aquitar is almost completely covered by water, however there are mountains and/or volcanoes poking up from underneath the surface. They appear to feed on pure water for the sustainment of their life force. Aquitar was seen in Zeo and In Space. An Aquitarian was briefly seen in the background of SPD. The Aquitar Rangers have appeared in MMAR, Zeo, In Space and Wild Force. 'Aqu' of 'Aquitar' most likely was 'Aqua' which in Spanish means Water. 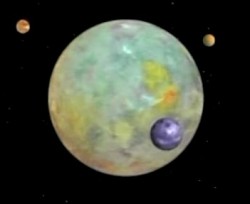 Triforia
Triforia is a planet, home to the Trey. The planet's surface is covered by landmasses with few bodies of water. The massive planet is orbited by three moons. It was first seen and only seen in Power Rangers Zeo. The planet was referenced in Ninja Storm by Marah and Kapri. They mentioned that "The boys from Triforia are three times as cute as earth" in 'Tongue and Cheek.' 'Tri' means three, obviously leading to the name. 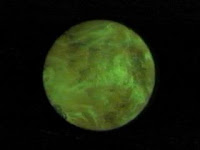 Liaria
It is home of Lerigot in Turbo: A Power Rangers Movie. It contained a jungle from which Lerigot teleported to escape Divatox's soldiers; Divatox's subcraft then flew from a body of water to follow him to Earth. In the series, Lerigot briefly returned to Earth to allow Zordon and Alpha passage to Eltar. Origin of name is unknown. 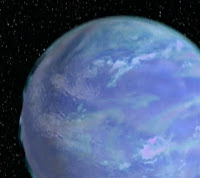 KO-35
KO-35 is the home planet of Andros, Zhane, and Karone. It is where Karone was kidnapped by Darkonda. Around the year 1996, KO-35 was invaded by a huge army, resulting in the near death of Zhane and the abandonment of the world by its people. Dark Specter had the Machine Empire attack KO-35. In SPD, there was a prison facility in KO-35's orbit and the planet looked different. Aquitar was re-used as KO-35. Origin of name is unknown. 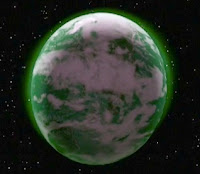 Mirinoi
Mirinoi is where the Quasar Sabers to come from in Lost Galaxy. Furio and the Stingwingers attacked Mirinoi and Maya went through a portal and ended up in the Earth's Moon. Prior to the Terra Venture's arrival, the natives of Mirinoi lived a relatively simple lifestyle, with no apparent technology in prevalent use. After the Terra Venture left the Lost Galaxy, they inhabited Mirinoi. Mirinoi was seen again in Lightspeed Rescue and Wild Force. Origin of name is unknown. 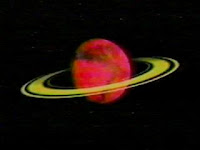 Onyx
The Onyx Tavern is found on this planet, it is first seen in 'In Space' and later in Lost Galaxy. It was referenced in SPD (the Dino Gems somehow ended up there) and Operation Overdrive for Thrax's base. Onyx is a planet where the evil elements of the universe hang out at. Onyx is a black gemstone. 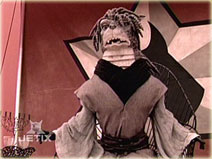 Sirius
Sirius is the home planet of Anubis Cruger and the planet to have the very first S.P.D. Its inhabitants are a race of dog-like humanoids with scaly skin. It was destroyed by Emperor Gruumm. The planet's name comes from the star, Sirius, also known as the Dog Star. 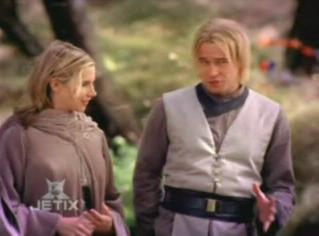 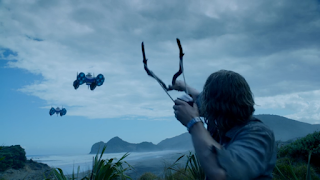