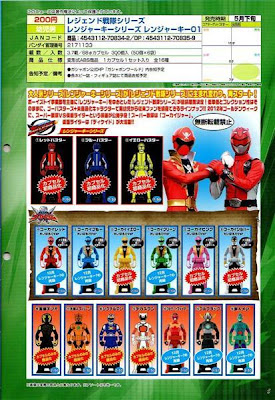 SPOILERS/RUMORS:
Rumor from Dukemon22 has it the next 2 Busters are named "StagBuster" and "HeatBuster" (Probably "BeetBuster". They are insect themed, and are colored gold and silver. He imagines it's more of a homage to B-Fighter and B-Fighter Kabuto. (Since Go-Busters is a wink and a nod to Metal Heroes.) Considering the track record of the poster on 2ch, and the timing at which this information comes, it's like 90% the real deal. Gold and Silver seem to be our next two rangers. The color scheme isn't the usual, but that's what's nice about it. Plus, we don't know how their suits are tailored- if it's like Go-on Wings, a majority of the suit is another color anyway. The only rumors that haven't been true has been the ghost theme and Gavan being a mentor. We should get pictures from the next catalog by the weekend or next week.

-DX Sets of the Hurricanger and Boukenger Keys will be released

-A Set of Kamen Rider OOO Keys will be released
Posted by Lavender Ranger at 9:13 AM

StagBuster and BeetBuster I thought to do more Gouraigers of Hurricaneger than Goonwing of Go-Onger (after, it is the fourth and fifth storage group, unusual colors in addition to the group and they have the same animal representations )

How is Gold and Silver NOT the usual? That's ALL we've gotten for 5 years running now.

After this cast, I wonder if there will be a sixth ranger, we may have not, already, we abandon the thesis of brilliant color ... Well ... For the sixth ranger, Black? White? Perhaps a less color used for the sixth rank as Blue ... Or not so often used as Orange or Purple ... Come on, I will speculate Brown Ranger, it would be so crazy as the fourth ranger gold color and fifth ranger silver color would not be so impressive next (there was never a Ranger brown, except in Ninja Captor, which I now consider a Super Sentai Unofficial as AkibaRanger).

To get away from all the sixth rangers for the next season, I wonder if there is a possibly to get all of the rangers in the form of ranger keys.