The term "Carrier Zord" came from Titanus toy box, it has been used by some of the fan-dom. I am not sure but I think Toei refers to them as carrier mecha or shuttle bases.

Battle Shark
Flying battleship that launches from the Big Bazer and splits in two to release the Battle Fever Robo. Armed with Tail, Wing, and Vulcan Missiles, Guns of Navarone, and depth bombs.

Jaguar Vulcan
Flying fortress. Its jaws open to let the components of the Sunvulcanrobo launch.

Gogglecaesar
A flying tank, launches from a pad beneath Kourakuen Stadium launches three components of Goggle Robo from numbered drawers.

Biodragon
Flying fortress which opens up to be a runway for the Bioman mecha.

Gran Tortoise
Liveman secret headquarters resembling a turtle that rises from the sea.

Turbobuilder
Turborangers' base that launched mecha, first one to become a robo itself.

Magma Base
From Fiveman, second to become robo.

King Brachion/Titanus
First one to carry the other mecha outside and not house them inside. In PR, first carrier zord ever and to form an Ultrazord. In PR, it formed three Ultrazords, coming back in Season 3. 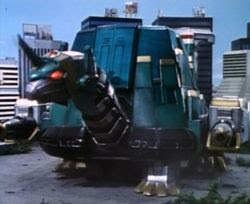 DaiMugen/Tor the Shuttle Zord
In Dairanger, the first to be human. It is also the first to house mecha inside and outside.

King Pyramider/Pyramidas
First carrier to belong to a warrior.

VicTrailer/Artillatron
In PR, second one to be owned by a Ranger. In Carranger, it came later on but did house the vehicles to go out.

Revolver Mammoth/Mighty Mammoth
Made a Ultrazord of sorts but was not called so.

Deka Base Robo / Delta Base
It is under the command of Doggy Kruger/Doggie Cruger and is the base of operations for S.P.D., it becomes a robot. In Sentai, 3rd to be owned by a warrior. In PR, 4th to be owned by a Ranger. 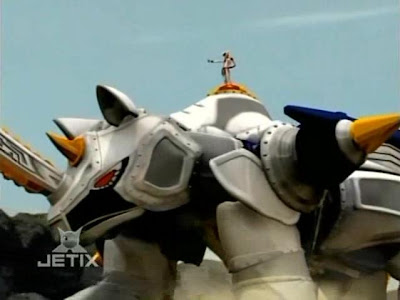 SaiDain/Rhino Steel Zord
Not officially a carrier, nor referred as such but it did form an Ultrazord of sorts with most of the other zords and did carry them. Owned by GekiChopper/Rhino Ranger.

Carry Gator/Croc Zord
Didn't carry all the mecha, only 2 but it does have the word 'carry' in it.

I might have skipped some.
Posted by Lavender Ranger at 1:28 AM